Every once in a while a musician comes along who reminds you of the redemptive power of music. Why sonic combinations make life worth living. Somebody that instils the desire in you to slam your fist so hard on your desk that you are left with a bruise so fierce it causes your friends to query the mental health of either you or your lovers. (Been there. Done that.)

Usually such musicians belong to one of three categories:

Therefore, when a classically-trained violinist from France inspires the same desire it is noteworthy.

Chapelier Fou – French for “mad hatter” – made his mark as a solo artist with an idiosyncratic quirky combo of self-loops, effects pedals, consonant chords and synthesized notes in a distinctive one-man-band fusion of classical music and modern techno.

Yes, we are fully aware that an enormous (and admittedly pretentious) variety of words are contained in the previous paragraph. But such is the nature of Chapelier Fou’s creations. Few musicians can combine so many instruments, moods, styles and genres and pull it off the way he did at the South Bank Centre last week, performing tracks from his new album Deltas.

Chapelier Fou – née Louis Warynski – spent his childhood, teenhood and adulthood studying the violin in the classical fashion. And it shows. His effortless capacity to produce the perfect note easily incites admiration and a slight bit of jealousy in any former music student. Last time he played London, touring his 2012 album Invisible, he performed as a one man band.

“It was really interesting to tour and construct, technically speaking and humanly speaking, but it was a lot of stress and responsibility,” he says. “You don’t really want to have that kind of stress when you’re on stage – you want to enjoy yourself as a performer.”

This time round he has brought three extra musicians into the fold:
Camille “Saucisse” Monper on cello, casiotone and drumpads;
Maxime “MST” Tisserand on clarinet, bass clarinet, Korg Delta and drumpads;
and Maxime “Chaton” François on viola, Arturia Microbrute, and – yes really – joystick.

If one wanted to describe his music in the language of a cultural studies student, one would say the combination of highbrow classical instruments with old school adolescent video game technology made for a delightful post-modern juxtaposition.

But I won’t, because it would make me sound like a twat.

Instead, I’ll say this: it rocked.

Piercing clarinets, clanging gongs, mournful bells and wooshy electric thrums came together for an explosive combination that would have been at home in a stadium. Monper’s bow strings were shredded by the end, like a heavy metal drummer’s tattered sticks or the bleeding fingers of a rock ‘n’ roll bassist.

The harmonic chords were refreshingly soothing, and the random spaceship sonic wobbles conjured warm fuzzy childhood memories. Plus it was clear they were having fun – always an enjoyable ingredient for the audience.

“Playing with other people gives me more room to improvise – it’s fun being able to surprise each other,” says Warynski. His duets with François, violin versus viola in the style of duelling banjos, made this clearly evident.

How many musicians can take a classical instrument, combine it with Atari technology, and create a form of music so innovative it deserves a new form of description? (‘Thrashing Classical’ comes to mind.)

Hats off, mad hatter. Hats off. 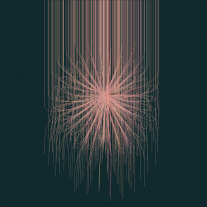 Popgazers Gulf's debut track features the sort of romanticism it's hard to not fall for...
Read More