An utterly charming collage animation courtesy of Swiss nomads The Pussywarmers and Hungarian singer Réka Csiszér (they’re “cosmically bound” according to the press release). It’s hard to think of a more apt way to visually represent their sound than this; cute, colourful, mischievous and ragged around the edges, both the video and the song have a ramshackle vibe that belies the craft behind it. It’s also about the sunniest thing you could hope to hear at this time of year. Seriously, it’s like injecting vitamin D into your ear canal.

The band hail from the Mediterranean district of Switzerland (we didn’t even know there was a Mediterranean district of Switzerland…), and are part of the Voodoo Rhythm Records family; a family headed by the filthy, depraved rock and roll animal that is Swiss miscreant Reverend Beat-Man, a tattoo-splattered filth demon you absolutely have to see live if you get the chance. The label’s slogan is, “We Make A Junkie Out of Everyone”, which kind of gives you an idea about their modus operandi.

Indeed, a few poppy heads pop up in the video to ‘Something You Call Love’, although this is less filthy smack-rock and more sun-kissed opium haze. Indeed, it’s the closest anyone’s come to capturing the Tropicália sound of legendary Brazilians Os Mutantes since The Bees‘ heyday about a decade ago. The sweet psychedelic vibe is reflected in winningly DIY fashion by glittery space-based backdrops, romanesco broccoli mountain ranges, and band members being turned into virtual Vishnus. Put it this way: there won’t be a more cheerful video that features the Virgin Mary bleeding from her eyes all year. 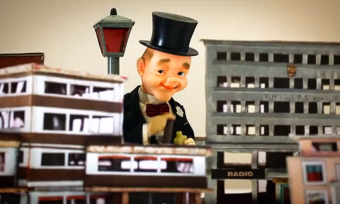 Kolombo's colourful remix gets a quirky video to match, as Munk & Mona Lazette take you on a house-tinged trip to Toy Town...
Read More