One of the hardest things for a musician to avoid is comparisons to other musicians. People can’t help it; you automatically look for something familiar in the music, a landmark you can relate it to in order to position it on the crumpled musical map lodged inside your brain. And while some landmarks are obvious, the fact that everyone’s map is different means that all sorts of outlandish parallels can be drawn. I once heard someone place Coldplay’s misery mansion next to Can’s funky bungalow; it didn’t make much sense to me, but everybody’s melodic geography is mapped to a different compass.

Clearly, before Bolton-born, Berlin-based Planningtorock (aka Jam (née Janine) Rostron) came along, there was large patch of untouched greenbelt land on my own map. 2006’s debut album Have It All, a feast of pizzicato strings and charismatic vocals that kept you from noticing the surprising lack of drums, stood entirely alone, like one of those weird buildings that outsider architects build in the woods out of oak and scrap metal. The only thing nearby was a deserted road that might have eventually led to Björk, but even that was too far to properly contemplate.

Despite augmenting her sound since then, Planningtorock remains an artist completely alone. Follow-up album W added synth and saxophone extensions, but Rostron’s realm remained completely unique, not least thanks to the gender-blurring, pitched-down vocals. And while a more distinguishable dance influence takes a grip of forthcoming album All Love’s Legal, you still couldn’t mistake it for anyone else. The most recent attempted comparison sees recently involved Grace Jones, but while there are certainly similarities between their spacious sound and deep, stentorian vocals, it’s still a stretch.

Unusually for a solo artist who performs with fairly minimal accompaniment, her music truly comes alive onstage; W didn’t truly make sense to me until I saw her play it at Sticky Mike’s Frog Bar in Brighton a couple of years ago. So despite a lingering cold, it was with some excitement that I returned to the seaside to see a one-off show at the Brighton Dome last night, as part of the venue’s Earsthetic programme (which also included the Mira Calix performance we reviewed earlier this week).

Largely I was keen to see how the new album, a stridently passionate record which retains the trademark P2R individualism and sense of empathy, translated onstage. A robust journey into gender politics that still manages to feel personal rather than dogmatic, track titles include ‘Patriarchy Over & Out’, ‘Let’s Talk About Gender Baby’ and ‘Misogyny Drop Dead’ (just in case you were unsure of her stance).

Of the new material, the latter is the most successful, perhaps due to it being one of the older tracks (it was originally released on International Women’s Day in March). The ’90s dance aroma that permeates the album is at its strongest, and the slightly fractured rhythms and melodies of the studio version are far less disorientating here. The bass is as deep as the atmosphere is thick, and quite frankly she fucking nails it. 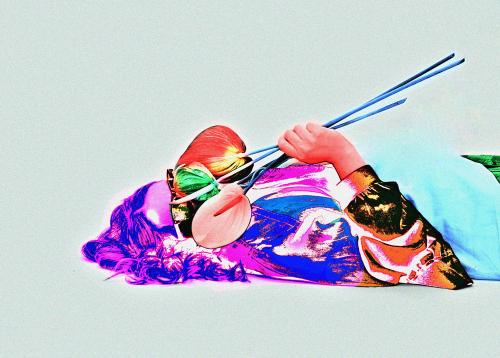 It sets a template for the rest of the night, and the tracks played from W sound, if anything, even better than they did two years ago, despite the lack of a live saxophonist this time round. The synths are absolutely huge on ‘The Breaks’, and the stark, electronic snare echoes work perfectly against them (the silhouette of the percussionist dishing them out looks equally brilliant against the video projection in the background too).

Certainly, it would’ve been tough to pick a better place to host a P2R showcase than Brighton; as a former resident, I’d find it difficult to imagine anywhere more receptive to music that deals explicitly with gender and sexuality. In fact, there’s some proper fan worship when things reach fever pitch, with shouts of “we love you!” providing regular punctuation between songs.

Eschewing the masks and prosthetic nose sported in the past, Rostron instead opts for a pair of Lennon-esque circular sunglasses and clearly feeds off the crowd’s enthusiasm – a claim that “I’m gonna sit down for this one” before ‘Doorway’ turns out to go unintentionally unfulfilled. A touch of electronic vibraphone enriches a groovier, sexier version of ‘Going Wrong’, while the dark tones of ‘The One’ make it feel like we’re all being driven down a desolate road at night to an uncertain destination. Even the Arthur Russell cover ‘Janine’, not a favourite of mine, sounds great, Rostron’s voice like a reassuring hand parting a curtain of softly droning, intertwining synths.

New single ‘Human Drama’, which Rostron describes as “such an important song for me”, gets a great response from the audience despite currently sounding slightly lightweight in comparison to the older material, with the melodic line bringing to mind unexpected thoughts of Youssou N’Dour. Still, there’s no way there isn’t going to be an encore tonight (“it sounds like you’re having as much fun as we are!”), and the new version of last year’s ‘Patriarchy Over & Out’ goes down a treat, pitched somewhere between disco and Detroit techno.

A second encore provides a welcome airing of the energetic ‘Living It Out’ (“just so you can have a nice dance!”). The crowd need no encouragement, and there is immediate pogoing both onstage and on the floor, before a spontaneous stage invasion blurs the barrier between the two. A girl interrupts one line in order to give Rostron a kiss. It’s that kind of night.

While chucking a few lines from ‘Smells Like Teen Spirit’ in is a little cheesy, at this point nothing could stop the night being an undisputed success. Even after almost a decade, Planningtorock remains a completely original proposition, one that’s turned uncharted land on my musical map into prime real estate. Judging by the crowd’s reaction tonight, that territory is increasingly taking over other people’s minds too. 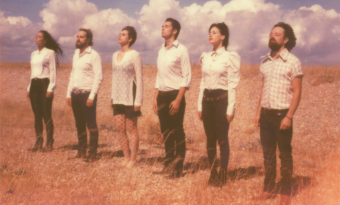 Sounding like a tempest tearing through the Wild West, London's Lola Colt are shooting from the hip...
Read More