The Nordic region is known for producing a disproportionately high ratio of musicians (Sweden on its own is the world’s most successful exporter of chart music in relation to GDP), so we thought it was high time we had a Monitors column dedicated to it.

Step forward Derval McCloat, who will be bringing us the best new Nordic music from Oslo to Oulu in a regular column. To get an appetising taste of the sort of treats we have in store, here’s her guide to the finest tracks, albums and artists from across the Nordics over the last twelve months….

Rangleklods certainly fused their experimental selves onto the dark electronic musical circuit board in 2015. The duo, made up of Esben Nørskov Andersen & Pernille SmithSivertsen, have electrified the Nordic music scene with their shadowy pulses, erratic energy and edgy but evocative take on techno.

‘Lost U’, their standout track of the year, has the usual dance sensibilities, which Rangleklods have laced with ethereal vocals that dreamily exhale sensual lyrics, funked up with jungle drum percussion, and shot across a sky
of quirky electro noises.

Set off by an outrageously good visual, ‘Lost U’ set the bar high for electro-pop and, having heard their new album Straitjacket, it’s a bar that Rangleklods are set to maintain!

Anyone who has reviewed Syzygy will attest to the fact that it has to be one of THE Nordic albums of 2015. An ingenious melting pot of distinctly BB-flavoured pop-rock, electronica, hypnotic hooks, demi-operatic vocals and the most haunting of harmonies, Syzygy is a carefully crafted, perfectly proportioned, spellbinding album.

For a debut, Syzygy is a stunner, and has rightly earned Blaue Blume a seat at the high table of Nordic music royalty. With its international release set for January 29, 2016 is set to be a busy year for the band: on top of a promotional tour, they’ll be hitting the festival circuit, having already been snapped up by Roskilde and by:Larm. So get saving those pennies – Blaue Blume are not a band to be missed live!

When Caspar Hesselager asked Carl Coleman if he’d like to hook up and create some sounds, what slowly but very assuredly evolved was new Danish kraut-rock-pop outfit Palace Winter.

The duo have pretty much taken the online musicverse by storm this year: blasting through Hype M, killing it on Fresh on the Net and notching up music air-miles on the hallowed ground that is BBC6. Having released their Medication EP in October 2015 to much critical acclaim, next year will see the guys release their debut album. With festival dates such as the prestigious by:Larm already in the diary, 2016 should see the continued rise of the musical meteor that is Palace Winter.

What a year it’s been for trio Eirik Fidjeland, Simen Hallset and Petter Haugen Andersen. In Spring they put paid to previous incarnation Angelica’s Elegy, rechristened themselves ‘Gold Celeste’, and launched ‘Can of Worms’, the first single from their ‘debut’ album The Glow, on an unsuspecting musicverse.

Three more singles, an album and a tour of Norway later, one could have been forgiven for expecting Gold Celeste to ‘down tools’ for a bit of Christmas ‘Ho Ho Ho’ and some Nordic ‘Juleboola’, but no; a propos of nothing, in the middle of a quiet, late November week, up popped this little golden wonder.

A gorgeous piece of soul-psych, ‘The Wonder of Love’, a non-album single, descended onto the world like a musical angel from on high. This song is one classily executed, beautifully vocalised and wonderfully arranged example of how the perfect song should sound. 2015 has seen this trio enjoy the “time of [their] lives,” and rewarded music lovers far and wide. 2016: more please!

2015 saw Susanne Sundfor break through the global glass ceiling with her fourth studio album (excluding Take One and A Night at Salle Pleyel), Ten Love Songs. A masterpiece in melodrama, with its flawless vocals, high-brow classical sensibilities and not so necessarily low-brow searing electronica, it may not be her magnum opus (I feel that is yet to come) but it isn’t far from it.

Ten Love Songs has left Susanne Sundfor on the cusp of something huge. She is now just a few steps short of achieving the worldwide recognition afforded to the comparable likes of Tori Amos and Kate Bush. Ingenious, gifted and with one of the best female voices in the industry, 2016 is Susannes’ to take. Let’s hope she does so.

With a voice that can swing from Nordic Rihanna to Norwegian cool, 2015 saw Astrid S return to the music world after a twelve month absence with two killer singles; and remarkably divergent ones at that. Where ‘Hyde’ is all smooth, delicious R&B soulfood, ‘Paper Thin’ is a delicate, emotionally laced acoustic romance.

Both these tracks show the broad extent of Astrid’s sensational talent as well as the relative ease with which she can move through genres without catching her musical heel, getting herself stuck in the glue of the labels which media all too readily stick onto emerging artists.

With a 100% hit rate thus far, it can’t be any surprise that we’re crowning Astrid S the best new Norwegian artist of 2015. With a debut studio album in the offing for mid-2016, you can only imagine that her star will shine even more brightly over the coming twelve months.

Finnish duo Henna Hietamäki and Tuomas Alatalo make up the shadowy hypnosis that is Cats of Transnistria. With a sound that is ghostly but enticing, their summer single ‘Thunder Comes’ came on the back of their debut EP, Away, released at the top of the year.

A subtly charged, semi-acoustic number that opens with a lingering instrumental of soothing acoustic guitar riffs, ‘Thunder Comes’ features otherworldly harmonies and hymnal organ instrumentals, given just the right touch of earthy sinfulness with the addition of intermittent stains of distorted guitar fuzz. With an extended outro in which angelic harmonics are delicately layered over quirky electro-guitar and a pared back instrumental, ‘Thunder Comes’ is a song of the night, full of shadow-play and nightshade atmospherics. Dark dreams call and pull you in, mesmerise and enshroud.

Cats of Transnistria’s sound has evolved nicely, and 2016 should bring even more depth and maturity to what is already a very defined vibe.

No surprises here. A stand-out album from a stand-out musical genius, Vulnicura was everything you had wanted from Björk and then some. Based around the final breaths of a dying relationship, it recounts the before, during and after – acknowledgement, bewilderment, acceptance and recovery.

‘History of Touches’ is like a sexual abduction – a thorough examination of the corpse of intimacy, poignantly but starkly recounted in a somewhat hazy, somnambulistic state. ‘Black Lake’ is a neo-classical masterpiece; a bleak ocean of sorrow and betrayal in which Björk’s love and heart sink and drown. Sparse, haunting, exquisitely performed and meticulously arranged, ‘Black Lake’ is a requiem for a relationship.

Every phase of romantic decay is observed, dissected and examined, in finite detail. Every passage is brought to life with cleverly apportioned instrumentals, set to searingly frank lyrics, vocalised with raw pain and honest emotion. Vulnicura has marked the return of Björk the musical honest broker, Björk the redefiner, Björk the forerunner of all things experimental, and Björk the creative genius.

“I was halfway across America, at the dividing line between the East of my youth and the West of my future.”

East of My Youth is an exciting young three-piece from Reykjavík who do adventurous and experimental things with electro-future pop. Made up of Thelma Marín Jónsdóttir, Herdís Stefánsdóttir and Guðni Einarsson, they take their name from Jack Kerouac’s iconoclastic beat gen book On the Road.

East of My Youth have an avant-garde edge and no-holds-barred approach that has seen their music develop a strong personality and broad sound. Spacious, dark, physical and evocative, it has attitude in spades and individuality by the lorry load.

Prepare to be met head on by this sparky trio as they set themselves up to storm into 2016.

Together, Carina Johansson Frick and Ola Frick make up electronic popsters Moonbabies. 2015 saw them spend some intensive studio time both remixing and collaborating on new works with electronic peers such as English whizzkids The Glass Children and fellow Swedes The Land Below. ‘Chorus Retake’ is a feng shui-ed version of the original ‘Chorus’ (er, natch), which features on resultant album Wizards on the Beach.

The ‘Retake’ edit is a thumpingly good electronic spectacular, with the original percussive nods to Fleetwood Mac replaced by insistent pulses and electro-drum beats. While it still retains some of its ’80s pop sensibilities in the form of echoey harmonies and Fairlight fantasia, the 2015 on-trend rework takes on a heavier, darker vibe.

With its catchy hooks, addictive beats and dreamy vocals, ‘Chorus Retake’ has become a dancefloor hit across the Swedish club scene and beyond.

Addictive, petulant, and vibrant – that’s what I think when I hear Stockholm-based Kate Boy’s compulsive, “thumpfest” of electronic pop.

It took three years for this jewel in the Swedish music crown to arrive, but oh my, was it worth the wait. Kate Boy have taken the time to hone their craft, and now have their sound down so pat it’s practically flawless. Self-produced with some assistance from Mode collaborator Christoffer Berg, One is a bubbling, seething mass of dark electronica and experimental, percussion-driven tempo-jerking.

Propulsive synths, forceful vocals and lyrics that don’t hide their light under a bushel, this tightly produced album falls just on the edge of experimental, without crossing over to the dark side. It has enough pace and ‘tuunne’ to satisfy clubbers, whilst brandishing sufficient synth swagger to keep electro-nerds in its thrall. One has placed Kate Boy centre-stage of the electronic Scandi pop scene and is set to keep them there for some while longer.

RnB meets soul, flirts with funk and chats up club-pop – this be where dis gal is at. Recently signed to Sony, LÉON is game, set and match-ready for the 2016 stage, with her anthemic pop songs and big, big voice.

Debut single, ‘Tired of Talking’ stomped all over Hype Machine, and with the spin machines of a major label fanning her back, it should be no surprise if LÉON flies to the top of the Billboards come mid-2016. Feisty, punchy and confident, with a voice full of gusto and a strong line in hooks, LÉON has done more than hit the ground running, she has scorched the earth. 2016 should see her on fire! 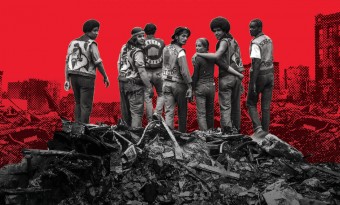