I feel a bit like I’m unwrapping a puzzle.

Music is art, we know that, we group the two together. Creative works, artificial constructs. Dance is art too, not just a place we move our bodies into when we hear a particular groove. It’s both, and we get so accustomed to that being what we look for. I spend most of my music writing talking in terms of the way my body is affected by noises, trying to string together tenuous metaphors to get across a sublime and incomprehensible moment. It is good to be reminded that actually, that incomprehensibility is what it’s all about.

So, Mira Calix is in a darkened room, with a single spotlight, a dancer, and a violinist I don’t even spot for the first ten minutes. The dancer (Ella Robson Guilfoyle) is just on the border of the light, static. Mira pushes a button on a laptop, and retreats to the centre of the room after fixing an initial burst of feedback. She hunches in the darkness, tapping the floor, tapping the light, like a cat. This appears to trigger movement in the dancer. This appears to trigger tapping from the speakers.

It becomes impossible to split the elements on stage. I start seeing Mira as essentially a shadow form of the dancer. The dancer bathes in light, and as a noise-scape slowly builds, her movement develops into strange fluid forms, shifting from one to the next. Is the violin responding to her? Are the sounds? Is Mira?

Mira starts slashing at the backdrop. It makes no impact at first. But the noise and movement reaches occasional cacophonous climaxes. The violin threads ethereal knots in the air. So does the dancer. Mira stands ominously in the shadow, splitting her attention between the dancer and the distant screen that is presumably conducting this piece. Even this feels like a statement. The shadow does not care for the light. It has other things on its mind.

Before the piece, entitled The Sun is the Queen of Torches, I prepared myself by watching the TEDx Albertopolis presentation, above, that was part of the event it was originally commissioned for. The piece is an exploration of the organic nature of crystaline photovoltaic cells, and the video had prepared me for a piece about inspiration. Fabric being torn to illuminate and enlighten, drawing a comparison between scientific and artistic discovery and epiphany. I expected a show about light and enlightenment.

This narrative is not the one I found. I’ll be honest. By the end, I was terrified, anxious and overwhelmed.

I can’t tell where it came from. The phenomenal soundscape, a web of concrete noises, tapping loops, abstract ripples of fuzz, tears built from tears. The strangeness of the darkness, the single spot our only anchor (once you learn to tune out the fire exits, the microphone indicator and the glowing Apple apple). The physical exertion of the dancer, constantly moving, in ways that seemed utterly other than human, despite clearly being so. The virtuosity of the rolling and shifting movement of the violin.

I wanted the darkness to be destroyed by the slow revelation of sunlight. I needed the Queen of Torches to set this lonely light-formed life-form free from its haunted, alien shadows. I couldn’t tell if the music was torturing this life form or encouraging it to grow. Maybe one leads to the other. 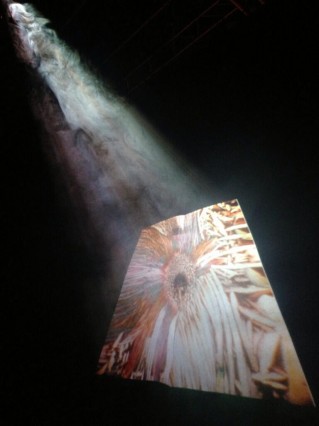 As the backdrop slowly let light through, it became clear it wasn’t a salvation. The light scattered and took a toxic green hue, the wall belched smoke cut into dangerous shapes by the oozing green. The lightlife, the dancer, clung to the violinist, clung to Mira, but was left broken and alone. The energy fading and the rapid cascades of movement slowly turned into a haunted stillness. The music followed this narrative, or was born from it. I’m not sure.

I am so glad I bumped into people I knew afterwards, who I could connect to and remind myself that I hadn’t been lost in this darkened chamber. This was not your average gig. An hour of indescribable motion and music.

Music is an artform, not just a background to a night out. It’s good to be reminded of that. It’s a powerful medium that contorts a space in ways we can’t really explain. We’re familiar with music getting us excited or even melancholy. We use it as a drug to get us through hard times, and let us free our bodies to dance.

But it can also make our brains contort, and tie us in emotional knots. It can point at some of those deep, huge and strange things we don’t like to talk about in public.

I’m glad that Mira Calix is creating such stunning work to remind us of that. 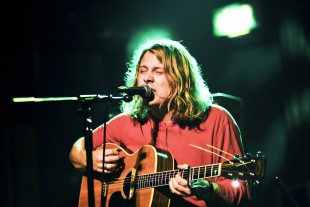 The new, acoustic and seated (!) Ty Segall still manages to get people moshing, but are the rest of his fans ready for it?
Read More