The word ‘cinematic’ gets bandied around an awful lot when it comes to music. Which is a bit weird when you think about it. After all, films don’t often get described as ‘musical’ unless they actually feature a load of songs, in which case they’re simply ‘a musical’. Novels, sculptures, poetry readings, gourmet meals… none of these are regularly described as ‘cinematic’, except perhaps by the most incurable pseuds.

Even if we take it as read that cinematic is meant to mean, ‘sounds like it could be from a film’, that’s still not particularly useful. The first ‘soundtracks’ were the jaunty ragtime numbers that a pianist knocked out to silent movies while a fat man fell off a ladder onscreen, but nobody ever describes Scott Joplin as cinematic. Ditto Kimya Dawson, despite the soundtrack to Juno going platinum in the States. And while post-rock bands often get described as cinematic for sounding like they could be accompanying climactic celluloid moments, films like Gravity tend to be scored by specialist composers rather than Godspeed You! Black Emperor (more’s the pity).

And yet, having decided that ‘cinematic’ is a fairly redundant term for music critics, I find it hard to stop myself using it – and equally meaningless descriptions like ‘widescreen’, ‘technicolour’ and ‘sounds like it could be in a film, innit’ – in relation to London six-piece Lola Colt. For their music is imbued with a rich, evocative passion any director would love to channel into their films (unless that film happens to be Scary Movie 6. Although even then it couldn’t hurt).

And for once thoughts of celluloid aren’t completely irrelevant. The band themselves are named after a Spaghetti Western also known as Black Tigress, described as “a very average Western filled with all the predictable clichés of the genre” by one critic, and even by the band themselves as having “a lot of flaws”. Nonetheless, they connected with the film on account of its strong female lead, and Lola Colt was born.

The band’s own strong female lead is Danish singer Gun, who is blessed not only with an awesome moniker but also with a voice so powerful it feels like it could stir up a whirlwind – think a less clipped Jehnny from Savages or a booming Siouxsie Sioux. It’s cast against a canvas splattered by the roving guitar of writing partner Matt, although the overall sound is also boosted by a percussive background seemingly created by anything within reach that can be hit, scraped or shaken.

Current single ‘Jackson’, released this week, combines these elements perfectly, like a tempest tearing through the Wild West that leaves you feeling like you’ve been garroted with a guitar string. B-side ‘Time to Burn’ sticks with the same theme: a moody build-up to a final showdown, forged from beautifully layered guitars. It makes you feel oddly naked if you don’t listen to it with a cigarette in your mouth and a holster round your waist. Luckily I always listen to music in such a fashion (naked that is).

The single shows the band progressing ever further through the plains explored on July’s single ‘I Get High If You Get High’, backed by the brooding ‘Boom Boom Blasphemy’, and has everyone here salivating for a full length. No, NOT like that you dirty bastards (although there is something undeniably sexy about the band’s dark, thrusting grooves); we’re hankering for a proper album, hopefully retaining Bad Seeds drummer Jim Sclavunos as a producer.

Perhaps Lola Colt will end up following in the footsteps of Scalvunos’ bandmates Nick Cave and Warren Ellis and start producing film scores alongside their studio output. Indeed, Matt has already speculated to Clash about what sort of films they’d suit: “A Spaghetti-noir, inner-city western. Or a rhinestone road trip through the desert and the sewers of the mind”. We certainly wouldn’t argue with that. Yet Lola Colt don’t require any visual accompaniment to bring out the drama in their music. Just stick it on and enjoy the movie that unfurls in your mind… 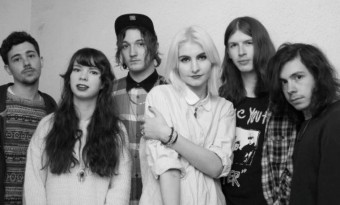