I’m not normally one for enormo shows. Something about seeing a band you love in what is essentially an empty carpark (just with overpriced bars and long queues for the toilet) for nearly £40 a pop isn’t the most promising start to a good gig. Nevertheless, Arctic Monkeys fever has been at an all time high this year, especially in our house, the office, on a night out, etc. Their fifth long player (‘AM’) was a culmination of years of development, a perfect combination of pop and heavy rock sounds. It also sounds dead sexy.

Ignore the haters who still see them as four ‘lads’ in trackies, they’re our generation’s only breakthrough band. The ’90s kids got Pulp AND Blur, we’ve been left with the dull thud of post-Britpop emotional porn: Elbow, Coldplay, Muse. The dance scene went and took all the fun, while guitar music thought it’d be good to become increasingly beard scratchy. If there’s one band which could possibly help halt this it’s the Arctic Monkeys, and their most recent UK tour has been their sink or swim moment. I’m happy to say, as my enthusiasm might already have made obvious, that they flew.

Swerving support act and 2013’s answer to McFly, The Strypes, we made our way between the growing audience, towards the large stylised ‘A’ and ‘M’ lights propped up at the back of the stage. The anticipation was palpable from an audience who literally wish they were Alex Turner (and not just the boys, it’s probably one of the most gender neutral audiences I’ve seen for a band of this ilk, although my only other experience of a stadium show is when Foo Fighters supported Oasis, which says a lot).

The house lights went down, the initials lit up, AM rocked up on stage in their new sharp dress code looking as confident as confident can be, and slipped into recent single ‘Do I Wanna Know’ like four men who deserve to be there. It’s testament to their development that first album favourite ‘Dancing Shoes’ has been beefed up to slot into a setlist in between ‘Brainstorm’ and ‘Don’t Sit Down ‘Cause I Moved Your Chair’. Indeed, Whatever People Say I Am, That’s What I’m Not was largely ignored throughout, ‘I Bet You Look Good On the Dancefloor’ and ‘Mardy Bum’ being the only two other tracks from that era to make it into the 21 track set.

One of the more dramatic changes to the band has been Alex Turner, from awkward, hormone-ridden teen to fully groomed, quiff-toting rock star. The Coral’s Bill Ryder-Jones came on for a selection of tracks to play guitar so Turner could showcase his new-found dance moves (which largely involve waving his arms around in various directions).

‘I Wanna Be Yours’ was dedicated to attendee John Cooper Clarke and was accompanied by an explosion of conffetti which upped the festival spirit of the set to 11. And, so cheeky you can’t quite believe they had the balls to do it, ‘Arabella’ actually broke into ‘War Pigs’ during the outro, just in case anyone was in any doubt about where they got that riff from…

Big return single ‘R U Mine’ closed the proceedings, and it sums up just where the Monkeys are now. They don’t have to do ‘505’ at every show, indeed they can end on a rock track and get away with it. From start to finish they proved that they are finally a mass audience band. From hereon in the chances are they’ll be around forever now, just wait till they announce that Hyde Park 2016 show, the reuinion show in 2023. It’s nice to know that not every band from the noughties was a flash in the pan, or an internet sensation with no substance. When they asked “We’ve got one question to ask you…” before breaking into the final track, the 20,000 strong audience had one reply: yes. 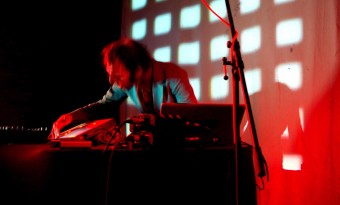 Dapper Californian beat conductor Daedelus looks like he should be piloting zeppelins, but takes this crowd on a different kind of outrageous journey...
Read More