‘Play Loud’ is a phrase that could, in this case, not only be used as a title adorning the frontage of a record as a distinctive identifier, but also as an order. An order barked at you via the greying lungs of a drunken army sergeant intent on making you rock out until you pass out. As orders go it’s pretty succinct.

Since 2010 they’ve released a small pincerful of limited runs and cassettes. They’ve played plenty of gigs with the likes of Hey Colossus, Good Throb, Sly & the Family Drone and Grey Hairs. Even former Teardrop Explodes singer turned writer Julian Cope is a fan, inviting them to perform at one of his book launches. Which must be a good sign.

Play Loud is nine songs of filth, coming in at about 32 brief minutes. It’s bratty, noisy and shouty, and I’m not talking about three rogue members of the seven dwarfs here. Or maybe I am. Who knows where Workin’ Man Noise Unit came from really? I wouldn’t be surprised if a few dwarfs got pissed off with Snow White’s dozy queen bee attitude and decided to fuck off and set up a noise band in the south of England.

All that said, what is surprising about Play Loud is how clean it sounds and how catchy it actually is. It has its fair share of earworms. Having witnessed Workin’ Man Noise Unit’s live raucousness I expected the album to be a whirl of abrasive electronic distortion, punky angular guitars and shouted garbles.

Yet from the off, ‘With Love Supreme’ offers a clear, if somewhat rowdy, rock cleanliness, which showcases the riffs and vocals in a fairly bright light, not the fuzzy murk I was expecting. It’s a pleasant surprise, as it allows Workin’ Man Noise Unit more space to explore and expand, rather than just get their heads down and bash away. As it were. You get the sense that underneath the aura of fun and larks lurks a rather serious band.

‘Cruisin’ The IDR’ brings to mind a more brutish Hives, if old Howlin’ Pelle and the boys weren’t so interested in pop-rock ‘n’ roll and instead sang drunkenly about Reading’s inner distribution road, which is by all accounts a very dim, concrete stretch of motorway. Not the most glamorous theme for any song, but Workin’ Man Noise Unit manage to make such a potentially dreary premise into a triumphant and invigorating chant-a-long.

‘Yeah, I Was Hypnotised’ combines Workin’ Man Noise Unit’s chanted vocals, rolling basslines and guitars into a eusocial (look it up) push towards invertebrate slacker bliss, writhing itself towards heavy drum beats and nonchalant guitar feedback. It’s like Parquet Courts sniffing glue behind the bike sheds I tell you.

‘Smoke Like Hell’ is the album’s big fat rocker. An opening bluesy riff kicks into a prime example of the band’s dual vocals interchange. It’s a standout track and perfectly captures their live experience. Like a sad drunk at a party, things inevitably turn sour: ‘Existence so futile’ cuts in one of the lyrics, echoing the themes of earlier track ‘Icegrill 420’. Workin’ Man Noise Unit are pissed & pissed right off: ‘We’ve got nothing to say but we’ll say it anyway.’

Slower tracks ‘Black lights’ and ‘Hate It’ continue this feeling of disenchantment and add a bummed out grunge sulk to the punk mix. Vocals echo about the corners of the song’s metaphorical darkroom like spiderwebs looking for a ledge to latch onto. The latter starts with a grungy Part Chimp-esque vocal leading a rallying, angst-ridden cry at the state of current culture. Well, it’s not angry necessarily, just disappointed: ‘So what’s the point of modern society?’

There are echoes of Sonic Youth and …Trail of Dead at their least pretentious throughout. Workin’ Man Noise Unit are angry at society’s unquestioning hive mind and willingness to follow a sullen path through to its own mediocrity. Not in a destructive sense though, as they ask (quite reasonably for a change): ‘No more pretending you don’t care at all.’

If that all sounds a bit Robert Smith you’ve missed the point (or I have). This is still an album to be enjoyed, like a swarm of ants kicking back with a six-pack. To top it all off the album also features excellent artwork by Tim Farthing of Hey Colossus and Henry Blacker fame. You can’t say fairer than that.

No wonder (the fictional) Workin’ Man Noise Unit wanted to get loose from the shackles of Snow White’s dwarf queen servitude and strike free via the medium of rock. Fuck being a drone dwarf like Dopey. What a cunt.

Break free, play loud and get your buzz on. 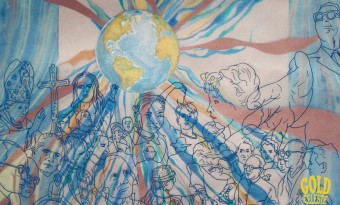 Gold Celeste arrive on the crest of a Scandinavian psych-pop wave, and the deliciously sugary sounds of their debut album are sure to leave you aglow...
Read More