The restoration and reissue of horror soundtracks has become something of a phenomenon over the last few years. The process that was started by Trunk Records‘ superlative restoration of The Wicker Man soundtrack has since gone on to be adopted by a host of labels to a greater or lesser degree of quality. One need only look to the excellent reissues from Death Waltz records – limited editions, housed in beautiful original artwork, on good quality coloured vinyl – to see that there’s a certain breed of cultural maven (erm, me…) who will pay over the odds for lovingly restored curios from a time when the horror genre was a playground for genuinely maverick talent, rather than a conveyor belt of lowest-common-denominator yuck-fests.

And in the late ’60s talent did not come much more maverick than director Michael Reeves. Although all the films Reeves completed before his death of a drug overdose at the age of 25 are mini-masterpieces of terror, it’s 1968’s Witchfinder General on which the large portion of his legend rests, and for good reason. Witchfinder is one of the most harrowingly amoral films ever to seep from the sceptred seat of what Sight and Sound called ‘The Old Weird England’. A film in which all virtue is demolished, corruption runs rampant and avowed pacifists end up hammering axes into people over and over again while screaming incoherently.

Don’t let any rose tinted ‘mystic ’60s’ bullshit deflect you; Witchfinder is a painfully difficult watch at points. A startling evocation of the brutal and bloody aftermath of the English civil war and the religion-fuelled ignorance that led a careerist psychopath (Matthew Hopkins, played with insectoidal menace by Vincent Price) to proclaim himself a model of Christian virtue and massacre his way up and down the country.

Good news, then, that the film’s Paul Ferris composed soundtrack has finally seen the light of day. De Wolfe have done a good job, too. It’s been superbly remastered from the original tapes (thought long lost, as these things have a tendency to be) and packaged with previously unseen photos and brand new liner notes. In short, it’s everything you could want, with only its curiously garish cover art (which makes it look more like a flyer for a roundhead rave than a mud-splattered relic from a byegone Britain) falling short.

Given the hard-bitten cynicism of the film, you could be forgiven for expecting Witchfinder General’s soundtrack to be all atonal crowing strings and deep gouges of percussion, a musical descent into paranoia and madness to rival Scott Walker’s Bish Bosch (now THERE is a live soundtrack event I’d pay to see), sadly the reality is a little more prosaic. What we have here is a ’60s orchestral soundtrack, no more no less. Violins soar and stab, snares clatter, lonesome oboes poke from the hedgerows and the session musicians involved punch out and go home for a tea of toast and hoops. It’s expertly crafted, skilfully realised and a little dry when divorced from the images and performances that it’s interpreting. This isn’t to say that it isn’t good – far from it. In parts it’s excellent, the opening title’s roil of executioner’s drum and creeping, pestilential horns stands out, as does ‘The Moat”s subtle evocation of dastardly deeds in the dead of night.

Given its curio value amongst genre experts, comparisons between Witchfinder General and those other two folkish chillers of the period – The Wicker Man and Blood on Satan’s Claw – are inevitable. Certainly, in purely cinematic terms there’s little competition between it and ‘Blood…’; it lacks that film’s cloying Christian sentiment and is clearly the product of a younger, hipper mind, while its aggressive nihilism makes The Wicker Man look like Whicker’s World. Sadly its soundtrack lacks the former’s startling passages of atonality and the latter’s folksy menace. Ferris was obviously influenced by the indigenous music of the British Isles, but what results is more Greensleeves than Green Man, boisterous and primary coloured where The Wicker Man’s score is autumnally hued and creepily erotic.

Of course it’s incredibly unfair to criticise the album on the grounds of what it isn’t, especially as what it is is such an excellent example of its genre. Should you be planning an evening at a local tavern and fancy balancing a wench on each knee whilst tearing strips of meat off a venison haunch, then here is your ideal soundtrack. Have a smashing evening and be careful that the Parson doesn’t drug your ale.

However, if you’re expecting the missing link in the British Folk Horror soundtrack chain then be prepared for disappointment; there’s little creeping unpleasantness here. Indeed the soundtrack seems to act as an inverse to its parent film: the movie’s harsh crudeness balanced out by its soundtrack’s melodious grace; its dramatic evocations of horsebacked heroism in direct opposition to Reeve’s tale of compromised heroes and soured ideals. It’s a fascinating relationship, but one best appreciated by watching the original film, an experience that remains unsettling all these years later. It’s a testament to Ferris that, in that context, his score is an essential counterpoint to Witchfinder General’s searing, uncompromising vision.

Magik Markers - Surrender to the Fantasy 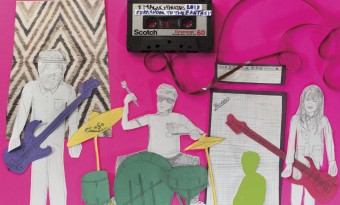 "You wouldn't doubt the power of a bear just because it was in a cage..." - we surrender to the melodious new sound of Magik Markers
Read More