As he emerges onto the stage, in a green ringmaster’s jacket, paisley tie and politely rising shirt collar, it’s hard not to assume Daedelus is more at home piloting zeppelins or driving Victorian trains. In fact, it rapidly becomes clear, what he does is drive those zeppelins directly into your heart, where they promptly explode.

He politely introduces himself and thanks Mock Sun for the (excellent) support, and tells us that he’ll start, and he won’t finish until he’s done.

He doesn’t. He really doesn’t. The relentless, gorgeous assault of music is so dense that it distorts time a little. I feel like I hear more music in that one hour than I have in the last week.

The magpie tendency of hip-hop is taken to a logical extreme. Every moment feels borrowed, looped and piled up. A fragment of crunching guitar can smash into a tic of an excitable ‘woop’, and just as you’re starting to get a sense of what is going on, it’ll quickly turn in on itself, tearing brightly into something new. 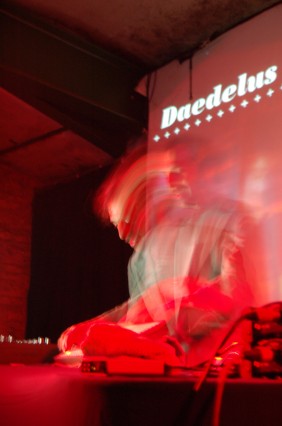 At no point does the music feel like it’s limited by conventional hip-hop beats or structures though. Nothing stands still. A melody might never be repeated. Moments are recognisably extracted from his past work, but they are given little more prominence than the acres of borrowed samples. It really is an act of collage. Not just of samples, but of textures and rhythms. I feel like I’m being given a rapid fire tour of the past decade’s bass music innovations, perpetually surprised by the riddims of bashment, ragga, bubblin and funky.

At one point, he steps back to make way for a brutal and perfectly orchestrated dubstep drop, except the step that emerges is so uplifting, optimistic and heartfelt that I’m tempted to try and coin a new genre: is ‘upstep’ taken yet? Does it sound a bit too much like upset? Is that okay?

It doesn’t matter. What unfolds is not really about these codifications, but just a feeling of being taken on an outrageous journey. We will keep on moving until this is over. Daedelus will show you so many things, but there’s no time to stop; there’s always more to see.

It starts to become clear towards the end that while his dress indicates refinement, he’s actually in the engine room. I watch, entranced, as he shovels coal into the fiery maw of the crowd in front of him.

As I start to tire out, take a step back from the raucousness and try to pay more mental than physical attention, he starts to shift tempos upwards, happy to confound people’s dance moves in a bid to increase the intensity for a few final bursts of wildness. The web of sound condenses and rages around him, as the crowd oscillate in a kind of feral bemusement. Beat after beat cracks into the room, bursting over the audience and drenching us in excitement.

He repeatedly towels sweat from the grid of buttons in front of him. I woudn’t be surprised if the equipment itself was sweating. He’s wedged this box upright, intentionally exposed. He looks like he could be playing an elaborate game, chasing lights across the box in front of him. I’m glad he invites us into these manipulations, it gives me the illusion that someone is in control of what’s happening. 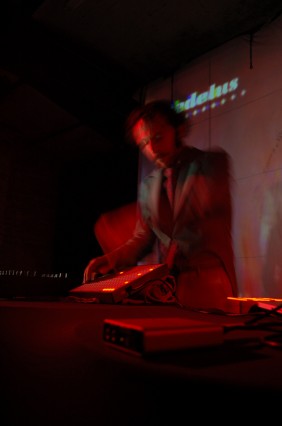 But we don’t need to see what game he’s playing to be taken deep into his raucous and beautiful world. What he shows us is rich and fantastical, but as my brain isolates recognisably poached fragments, I remember something important.

The wonderland he builds for us, is built out of fragments of the already here. Tiny pieces, cut to size, photocopied, glued together and pressed into something incredible.

Daedelus builds a whirlwind, and dances in the middle of it.

Everyone is caught in it.

It’s quite a show. 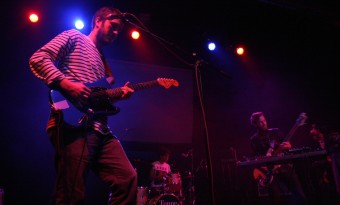 Alt-folk veterans Tunng take on Brighton, but it's Danish destroyers Pinkunoizu who really get the crowd writhing...
Read More