Ah the 90s, we all like the 90s don’t we?! Just think of all the stuff that was around then, Captain Planet, Mighty Morphin Power Rangers, A Nightmare on Elm Street 6: Freddy’s Dead, The Final Nightmare and Sister Sister. All things we loved as kids.

There were some right cracking rock bands about too weren’t there? In the ’90s, rock had genitals and knew which way it was pissing. It was pissing right into my ears and by the sounds of it into Dundee three-piece Fat Goth‘s too. Fat Goth drop cracking alternative rock boulders like mutant King Buzzo, it’s as if the dull rock landscape of the 2000s never happened, which they did. I think.

One Hundred Percent Suave, Fat Goth’s third album, is a demented ride through rock’s gnarly peaks. You must be over five foot to enter and you’ll probably bang your head a few times on the way up. No refunds.

Like their previous album Stud, One Hundred Percent Suave dashes from one rock style to another; one minute you’re listening to the misleading indie jangle of opener Disclaimer the next you’re chucked head first into the murky duck-water math rock of lead single Sweet Mister Scary. The guitar line brilliantly wrestling itself to the ground like a possessed Graham Chapman, before going full triumphant metal and clubbing itself to death with its own foot.

Second single Class A, is probably not a good song to do class As to, due to its powerful drum scrum, but it’s a ruddy belter to sway to if you’ve had a few on a Tuesday morning, on your own, in the shed. Singer/guitarist Fraser Stewart squeezing out a cheeky falsetto before launching into a top-notch lounge lizard croon, arm wrapped around your shoulder telling you everything will be okay.

One Hundred Percent Suave isn’t an album built for your modern iTunes style previews or track skipping. If you’d heard a snippet from any of the songs you wouldn’t have a clue what the album actually sounds like. Each song is its own wee journey, changing and mutating every chance it can get, absorbing any fucker in range, like The Blob. No one can survive.

Sin Altar is a ridiculously dirty metal/noise rock song. I’m talking absolute girders here, full metal riffage. Its opening bass line is so monstrously devastating it could kill small woodland animals from fifty yards. It’s the sound of an actual Jesus Lizard. Seriously, I mean a massive one. All scaly and that. Playing noise rock. David Yow would be proud; in fact he must be as he contributed the painting of the band that acts as the album cover. Now that’s an endorsement.

From then on in One Hundred Percent Suave is a stick of rock gold. As you listen to its windy rock-metal bounty you’ll hear the influence of a shit load of cracking alternative bands from the last twenty or so years. I can’t remember exactly which years; I was pretty drunk through lots of them (no need for an intervention though yeah).

So many different styles mingle and brawl for attention, restlessly jittering around like a breathless goldfish in a bucket and there’s always a big fat hook lurking round the next musical corner ready to catch and gut you ready for display.

That’s not to say that Fat Goth sound like some bastard Frankenstein’s monster made of rotten bits of old bands, I’m not saying that right, they make music that is very much their own. There’s nothing wrong with referencing, Harvard style, and they clearly have a righteous record collection and know how to party. They are from Dundee after all. If the Foo Fighters hadn’t become stadium-fodder for Gap-wearing trolls then they may have become as good as this one day. Poor Dave, he seems nice doesn’t he?

Again carrying on where Stud left off, the album requires the right eyebrow to be fully arched; Stewart’s lyrics are full of false machismo, bragging and ironic self-deprecation as he croons, barks and screams through belters The Solitaire, I, Corruption! (which sounds like a brilliant Amicus horror film from the 70s) and The Stevie Nicks Method with a surprisingly confident vocal range. Fat Goth understand the ridiculous maleness presented in most rock music and poke fun at the meat-headed spam faces out there that can ruin it for everyone.

Odd instrumental track Lower Pleasance is a low end industrial bass-off between the lovely Jesus Lizard song Puss and Megadeth’s Symphony of Destruction, if that doesn’t do it for you then I really can’t help you I’m afraid. Bassist Kevin Black sounds like he’s playing in a vat of molten iron with drummer Mark Keiller haphazardly trying to fish him out with a broken pointy stick.

Summing up Fat Goth’s ironic lyrical take on plastic uber-manness is Caligynephobia, the album’s epic seven-minute plus closer, and it rounds off proceedings perfectly like a well-heeled kick to the nethers. The title and lyrics refers to a fear of beautiful women, beautiful like me. And I’m not that scary really. It’s a lyrical drop of the shoulder that belies the real confidence of the band’s music. The song grows and grows from an arm-waving lost-Blur strum, to a power rock muscle flex then falling back, exhausted, into a dreamy lullaby march ready for bed and a well-earned kip. No doubt tuckered out from a day of (rock) genre mangling and finger-gun giving fun.

After all that, we now know which way Fat Goth are pissing and it’s definitely into my ears, and if you are wise you’ll angle your heads 90° for a splash too.

Woods - With Light and With Love 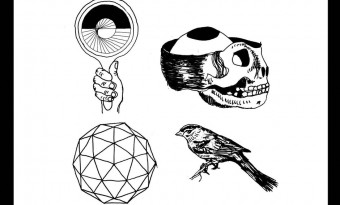 If you go down to hear Woods today, you probably won't be surprised at all; as the psych-folk collective's latest album all sounds a bit... familiar...
Read More