As Guinness drinkers and people with the patience of a particularly smug saint are prone to saying, good things come to those who wait. Well, we’ve waited longer for this latest Dosh album than we’ve ever needed to since his self-titled debut album came out on Anticon just over a decade ago. And on the evidence of Milk Money, his first release on Graveface Records, the proverb holds true.

It may have been two years since the self-released Silver Face came out, but as soon as opening track ‘We Are The Worst’ kicks in, it’s like he never left. Dizzying synths spin around a gliding bassline, flutes flutter above slices of reversed strings, and super-delayed vocals are spread over the top like so much viscous honey. The combination is pleasingly disorientating, like finding a steaming bubble bath in the middle of a forest clearing.

‘Death Set’ produces much the same feeling, although this time the bath water’s a bit lukewarm and there’s an owl perched on the tap giving you a sinister look. It starts off with Brazilian rhythms being plucked against slurring strings, before the track switches into a lilting 6/8 beat. Little keyboard zephyrs whisk their way between beats, although they all seem to be blowing in different directions.

The rhythmic kaleidoscope shifts once again for ‘Kisses’, which delivers the most complex patterns yet – the drumming is seriously fantastic. Apparently Dosh still gives out drum lessons to this day, and listening to this almost makes it tempting to fly out to Minnesota to receive some teachings. The track’s title seems a little misleading though; if his actual kisses are as complicated as this you’d probably need a degree in mathematics just to make out with him.

Things calm down a little for the languorous ’20 Year’, which is in nice, normal 5/4 (ahem). With a crackling beat playing against sad, shiny keys and layered vocal samples, it’s definitely the most Anticon-flavoured track on the album. ‘Unto Internity’ is more upbeat, with a similar vibe to Jacob 2-2’s Herbivore (one of our favourite recent albums), bubbling with quirky detail while a theremin leers, googly-eyed, at the quirky detail underneath it. A winner.

Is ‘Golden Silver’ a tribute to the final stage of the Crystal Maze? Or to the now-defunct XL band Golden Silvers (a former member of which now plays in our band of the week, Hejira)? Probably neither to be honest, but that’s no big deal. It has the feel of Dan Deacon if he wasn’t so concerned with getting the party going, and was instead content to simply sit on a jetty and watch the sea lapping against the shore. Possibly after having taken DMT.

Considering how dense the tracks are, they all seem to be over quite quickly. However, that’s not something you could say about the final track, ‘Legos (For Terry)’. Not at all. Unlike the preceding tacks, which each seem like an album’s worth of content squeezed into a single song, this track has so much space (almost 25 minutes) that NASA might be tempted to launch a rocket into it. It begins with a calm, somewhat melancholy introduction, onto which piano notes slowly descend like falling leaves, eventually drifting together and forming a delicate ostinato. Soon, organ and percussion poly-rhythms arrive, and the track gently builds into a minimalist odyssey, topped with adroitly edited vocals.

Considering its scale, breadth, and reliance on effervescent repetition, you could be forgiven for assuming that the Terry of the title is Terry Riley, although it was actually inspired by the artist’s Dad, a former Benedictine monk. “He has a sense of patience and inner calm that is remarkable,” Dosh told Pop Matters, “I want to be like that, and I guess this song is sort of a way to remind myself that it is possible”. Whether he achieves his personal goal or not, he’s certainly succeeded in communicating it musically.

It’s perhaps surprising that an artist so associated with a specific label could make his best record after having moved on, but that’s what Milk Money feels like. Perhaps it’s the relative absence of collaborators that helps it feel like such a studied, personal statement, or maybe the extra time taken allowed it to flourish. Dosh has admitted that the album “felt like a lot more work than some of my earlier ones”. It’s work that’s paid off.

Crystal Antlers - Nothing Is Real 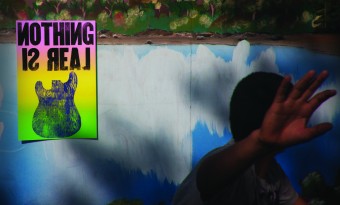 The tame faux-rage of Nothing Is Real sadly indicates another step on an unfortunate descent into bore-core.
Read More