Crystal Antlers have always traded on the genre-defying quality of their sound, but now it seems the jig is up: if Nothing Is Real is anything to go by, the central Crystal Antlers character rests on a sound bed of bore-core. In itself, Nothing Is Real isn’t offensive: everyone’s making noise, Jonny Bell is shouting, we’re aaaaall having fun! But as part of their discography it’s just another step towards the commonplace; abandoning a sound that’s full of potential, it feels like Crystal Antlers are getting progressively more beige with each release. If this kind of relentlessly boring sound-pruning continues, in about three albums’ time they’ll be My Chemical Romance.

The amount of work that must go into crafting a new sound deserves a lot of respect, and the paring back that characterises Nothing Is Real shows the level of deliberation surrounding this release. But Crystal Antlers have shown an unmistakeable trend of making each record sound ever more measured, and Nothing Is Real is no exception. It exudes a sense of faux-rage and safe noise, the hallmarks of acceptable popular rock. This is not the worst album I’ve ever heard, it’s just that it is another vaguely disappointing Crystal Antlers record that doesn’t live up to their debut EP. With each release their wild and loose essence has been streamlined to negative effect, culminating in a sound that is significantly less raw.

It begins promisingly enough. ‘Pray’ references the hazy prog-rock sounds of yore, and this track would undoubtedly make a really cool live experience. But then it steers away from the experimental and towards what I wildly hope is an unintentional reference to flash-in-the-pan emo from a decade ago – Billy Talent come to mind, but I readily accept the charge that this reveals way more about me than Crystal Antlers.

Of course there are songs on Nothing Is Real that are a good listen: the lo-fi hum of ‘Better Things’ is catchy and makes another worthy track for the live setlist, and ‘Prisoner Song’, a surprisingly delicate and shabby affair, is excellent. But ‘Rattlesnake’, which comes across as one of the songs they feel deserves the most attention – it was released as a single back in July – is tame pop-rock. I almost don’t recognise the band: adolescent lyrics sandwich choruses consisting purely of the words “rattlesnake” and “yeah”, and are barely masked by insipid guitar riffs over an unimaginative drum beat. The redeeming feature of this track is that it is, after all is said and done, pretty catchy. ‘Licorice Pizza’ more convincingly taps into a delightfully scuzzy scene, although it’s still self-aware enough to seem a touch disingenuous, but ‘We All Gotta Die’ once again doesn’t quite escape that adolescent vibe.

Coming across as loud but covertly neatened, Nothing Is Real seems like a backwards step for Crystal Antlers. Dropping their bongo player to become a trio again for this record makes their definitive movement towards a more mainstream-friendly sound seem all the more committed, while cementing the fairly flat spirit of the album. It’s fun live, I’m sure, and maybe they’ve gained more listeners this way, but if Crystal Antlers continue in this vein it feels like they’ll lose the best part of themselves. 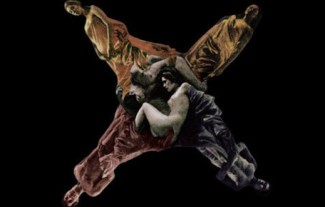