Cheese. Paradise in a golden rind. Prince of the post-dinner platter. Scourge of the lactose-intolerant. And, apparently, destroyer of drummers.

For it was some particularly heavy cheese that almost destroyed Zachary Shigeto Saginaw’s career. The Michigan resident, and then aspiring jazz drummer, was living in London and working in an artisan cheese shop when he developed tendonitis after lifting one too many weighty wheels of Smoked Woolsery. Unable to drum for a full six months, his frustrated urge to make music finally found release when a friend passed on a copy of Reason 2.0.

Already a fan of electronic music, he ploughed his energy into producing tracks using the new tools at his disposal. Sudying jazz at university had made him a little cynical – “Having what I loved about playing jazz put into a box with “right” and “wrongs” took away the magic for me and created a lot of self doubt,” he told Bowlegs Music – but here he was not only in total control, but also turned out to have a natural talent for this new type of composition. Across several releases on hometown label Ghostly International over the last few years he’s gone from strength to strength, culminating in this, possibly his finest statement to date. Being crippled by cheese may not be the best superhero origin story ever told, but in a world where Ben Affleck can become Batman, No Better Time Than Now provides an otherworldly brilliance that could’ve been beamed here from Krypton.

‘First Saturn Return’ is pretty much the perfect introduction. Sizzling static fizzes over endlessly sustained keys and chimes, while electronic reels start spinning at increasing speeds – as mood-setting goes, it’s like being welcomed into a candle-lit boudoir by Barry White in a velveteen robe. ‘Detroit Part 1’ keeps its various percussive elements kept in a loose orbit, adding a staggered swing to proceedings alongside a lovely kalimba breakdown. Its beauty doesn’t seem particularly evocative of Detroit itself, it has to be said, but then Shigeto lives there so we’ll defer to his judgement.

Part of his compositional process is to select the sounds he wants to use before he actually starts writing, plucking samples and instruments like an expert Sri Lankan tea picker. The time spent on this process pays dividends, from the headily hazy guitar on ‘Olivia’ to the devastatingly resonant kick drums on ‘Ringleader’ and ‘Perfect Crime’, which immediately make you want to rush down to Richer Sounds to splurge on a new subwoofer. The latter track is particularly layered, although the way the bass and synth lines embrace each other is the key element. The first three minutes feel like a car cruising through the city at night, at which point a fresh beat appears from nowhere like it’s suddenly hit the motorway and can really open out. You feel an almost tangible sense of disappointment when it suddenly fades out.

Betraying its title, ‘Ritual Howl’ is surprisingly delicate and light-footed (what sort of creature would howl like this? Tinkerbell?), while ‘Safe In Here mixes rapid train track rhythms with soupy chords. While Shigeto’s jazz upbringing can lead things into slightly noodly territory at times (‘Soul Searching’ for instance), and tracks like ‘Miss U’ get a little cheesy (his old nemesis strikes again!), the sheer depth of his sound stops things ever getting irritating. The way he can make solid percussion sound absolutely fluid is particularly beguiling.

‘No Better Time Than Now’ proves itself a worthy title track, summing up many of the best elements of his music – layered rhythms, sultry keys and dominant electronics that never sound anything other than entirely human. ‘Silver Lining’ then manages to somehow smooth things down even more, presenting a toy-box lullaby that inhales and exhales like a sleeping child, while distant vocals are kept under a silky veil of reverb. Beautiful.

It would’ve made a better closing track than ‘Tell A Tale’ to be honest, and with very few stylistic shifts on the album it could’ve survived being trimmed a tad. Still, if you like your electronic music with heart as well as technical ability, then file this with your Flying Lotus and Jon Hopkins records. He’s talked about how he doesn’t like to compress his tracks, in order to “let the music breathe” and avoid being retrospectively tainted by a technique that’ll end up sounding dated. Yet he could probably ladle Lady Gaga levels of compression on this without worrying about that too much, as No Better Time Than Now already sounds timeless…

The Moondoggies - Adiós I'm a Ghost 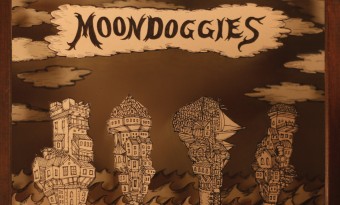 Authentic, enthusiastic Americana that proves that those heralding the death of rock 'n' roll are talking "gibberish"...
Read More