Someone, somewhere, really wants me to start watching cult Canadian children’s sci-fi films. Our last Album of the Week came from Jacob 2-2, a producer who took his name from the 1978 film Jacob Two-Two Meets the Hooded Fang. Now I find this week’s finest album, Golden Age by Phèdre, was created by April Aliermo and Daniel Lee, two members of Toronto’s…Hooded Fang. Whatever latent creative inspiration lies within that film, it’s clearly a potent source.

Anyway, somewhat removed from fish-men and slime resistors (don’t ask me, I haven’t seen the bloody thing), Phèdre are themselves named after a 17th century Jean Racine play, based on Greek mythology and revolving around incest and suicide. Doesn’t sound like a barrell of laughs to be honest, but the band’s second album, recorded in Germany, manages to bring the party regardless. Their vocal interplay sometimes recalls that of Mister Quintron & Miss Pussycat after a few bongs, or Angie Reed & Chilly Gonzales, another pair who settled in Berlin after crossing the Atlantic. Their music certainly has that same mixture of self-aware humour with a European sense of hedonism.

Their arty, elaborate stage get-up and insatiable love of synths also brings back memories of the electroclash scene at the beginning of the century; only here there’s less arch knowingness and slavishness to fashion, and more, you know, fun. Combining the deadpan vocals and dancefloor sensibility of Miss Kittin with the slower-paced, atmospheric pop of Ladytron, Phèdre also manage to make their music feel surprisingly unpolished despite it being almost wholly electronic; a pretty hard trick to pull off, and one that provides a rough edge to their bountiful sparkles.

Thins do take a little minute to get going though. Opnener ‘Infinity Chamber’ comes packed with a meaty bassline that inexplicably fizzles out after a minute, while ‘Ancient Nouveau’ is plenty bouncy but without bouncing anywhere particularly interesting. It takes ‘Supernatural’ to really get things rolling. “You can try and catch me,” invites the chorus. Fittingly, it’s extremely catchy.

‘Haberdash’ is, if anything, even catchier. Lee and Aliermo’s vocals are at their most louche, and the whole thing manages to be both sexy and silly simultaneously. ‘Aquarius’ takes the tempo down a notch, while still feeling a little frenzied. Swooning vocals from Lee cut through the chaos, as does another super-sticky spoken refrain from Aliermo: “Gold will rain / Pockets full of change / And the world goes round / Prisons by the pound”. A metaphor for the trappings of capitalism? A comment on the prison-industrial complex in the States? Who knows, everyone’s too busy dancing to find out.

The perfect accompaniment to a nice late lie-in on the weekend comes courtesy of ‘Sunday Someday’ (if your bed happens to be orbiting Neptune that is). Then ‘Death of Cupid’ smartens up some sick-drunk guitar chords with a snappy beat, before ‘Too Many Lashes’ lays a strong claim to being the sassiest track on the album.

Then gloriously smooth closing track ‘Atomic Love’ sees Aliermo intoning, “nothing could be oh so worse than wasting our atomic love”. For some reason I’m now imagining Obama, Netanyahu, Putin and Kim Jong-Un all slow dancing together to it. And unfortunately, having conjured this image, I’ll never be able to listen to this song again without boking.

I guess that means I’ll just have to keep a sick bucket handy, as Golden Age will definitely be getting multiple repeat listens. It may not be the most ground-breaking or original album of all time, but having had my stereo dominated by Forest Swords, The Woken Trees, Huerco S., Chelsea Wolfe and King Krule recently, it’s a much-needed injection of fun. Fill up that syringe, I need another hit… 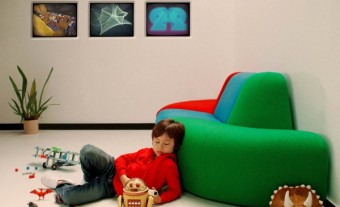 Jacob 2-2 takes a trip through the febrile imagination of a quarantined child, on one of the year's most colourful and inventive albums...
Read More