I like anything from Portland, OR and Unknown Mortal Orchestra are no exception. I hadn’t listened to their music much before seeing their sold out show at the Troubadour in West Hollywood, but now I am officially a fan. Their vibe is comparable to that of Tame Impala and Portugal. The Man but they definitely have their own unique sound, ranging from psychedelic to funk to Motown and more.

What I noticed first is how the three members stand out as distinct individuals onstage. Singer Ruban Nielson (who also plays guitar) was wearing a beanie and a poncho. Drummer Riley Geare (who also plays keys) had long hair, a headband, and a muscle tee. Bassist Jake Portrait looked like he would be in a Captured Tracks band, with an ensemble that included a backwards hat and harem-like trousers. Despite their different wardrobe styles, they played really well together, totally grooving and harmonising throughout the show.

Their set started off mellow with ‘The Opposite of Afternoon’ followed by ‘From the Sun’ and ‘Thought Ballune’. Nielson had one mic running through two sends, a clean and an effected one, so his voice sounded as perfectly lo-fi as it does on their albums. He played a Fender Mustang at first and then switched to a Coral Sitar for ‘How Can You Love Me’ which is when things began to take off. At one point Nielson and Portrait stopped playing and sat down while Geare took a drum solo that seemed to last about five minutes, boasting dramatic tempo changes and eventually leading them into the next song.

The rest of the songs featured some very theatrical guitar solos. With his poncho draped over the guitar, Nielson would switch from kneeling down on the ground to playing it machine gun style, moving all around the stage. After nine songs they were done, and seconds after walking off stage the crowd started chanting, “One more song!”. Nielson came back out alone and did a solo, acoustic rendition of ‘Swim and Sleep’, giving it a really nice medieval folk feel. Then Geare and Portrait came back for ‘Ffunyy Ffriends’ and a few more jams. The crowd was definitely pleased.

I have to admit, I was expecting these guys to be pretentious hipsters, but halfway through the set Nielson addressed the audience saying, “thanks for watching our silly band” and introduced Geare, Portrait, and even their Front of House. How many bands have you seen introduce their FoH during a show? To sum this up, I would say that Unknown Mortal Orchestra should be your new musical obsession. If they aren’t already. 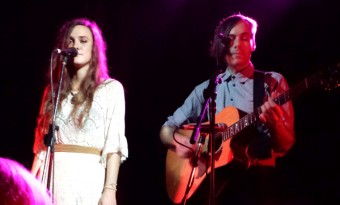 Despite ditching the bear suits for this stripped back acoustic set, Kevin Barnes still knows how to take an audience on the most unique of trips...
Read More