Many band’s first forays into performing live involve getting booked by tight-fisted promoters to play tiny, deserted venues in return for, if they’re lucky, a free pint of flat beer.

Wampire‘s method of playing house parties in their native Portland seems a far better idea. Sure, you may have to play on a staircase and there probably won’t be a soundcheck (like sound engineers at small venues ever pay any attention anyway), but at least you’re guaranteed an audience; better, a wasted audience who’ll not only be in a good mood but won’t care if you end up taking a few experimental excursions (or just dropping a few bum notes) mid set.

Cutting their teeth “in the corner” at parties certainly doesn’t seem to have done Rocky Tinder and Eric Phipps any harm. Their music maintains that vibe of a couple of guys not clamouring for attention but having an infectious kind of fun on their own which other people can’t help but have their heads swivelled by.

Dubbed an “indie/goth/horror outfit” by Noisey, perhaps in an attempt to categorise them as some sort of Oregon Horrors, the duo’s very name indicates they don’t take themselves too seriously (apparently it comes from a nickname bestowed by a German exchange student with typically Teutonic ‘v’ and ‘w’ pronunciation issues). Instead they insist they simply “wanna be lighthearted and funny, playing shows, getting drunk with good people, and just hanging out”.

These ambitions have already been partially fulfilled by a successful tour supporting Unknown Mortal Orchestra and Foxygen, where they caught a number of ears by being friskier than the former and less irritating than the latter. While the prospect of yet another semi-moustachioed synth ‘n’ guitar band might set off some people’s hipster sirens (and the fact they end many shows stripped down to their scruds may well put off others), there’s a joyousness to their music that quickly dissolves any jaded cynicism.

UMO bassist Jake Portrait produced their forthcoming debut album “Curiosity”, and while Tinder has described it as a “weird” record that’s “a little chew and swallow,” the early signs are that, actually, it’s gonna slip down a treat.

Lead single ‘The Hearse’ sets up their schtick with a cheap keyboard imitation of an old horror organ escalation, but when the upbeat rhythms kick in, reminiscent of Here We Go Magic’s ‘Old World United’, it’s clear no Nosferatu could survive in such a sunny atmosphere. It even features a sprightly Kraftwerk cover on the B-Side.

Then there’s ‘Magic Light’, which sounds like Julian Casablancas lounging on a tropical island with a cocktail, surrounded by fairy lights while basking in the relief that he doesn’t need to tour that dodgy new Strokes album. Meanwhile the remaining Strokes are busy drafting in Gary War to help finish off ‘I Can’t See Why’ and thanking Christ he’s gone.

Then you have ‘Giants,’ which kicks off with a blistering psychobilly beat that boots you through the door of a House of Horrors, only for it to turn out to be a Tunnel of Love on the other side. Essentially it’s a classic Scooby Doo episode in musical form.

Of course, some of these tracks might sound significantly different on the album, which apparently saw the band, with Portrait, deconstructing each song and putting it back together from scratch. It’s hard to imagine them turning out any way other than awesome.

Considering the pair have been playing together since middle school, they’d be forgiven for feeling it’s taken a little long to reach this point. Instead, Tinder is relieved, saying that he’s glad that wider recognition has “happened now, because now we have a sound we’d actually listen to”. It’s a sound you should actually listen to, too. 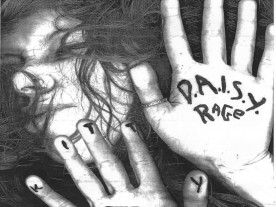 There are certain people, many people, for whom Cyclops isn't a fearsome one-eyed monster from Greek mythology but a sanctimonious, laser-shooting twat sporting a terrible pair of wraparounds. Kathryn Beckwith is presumably one of these people.
Read More