I’ve always found Hot Chip annoying. Actually, that’s not strictly true; tracks like ‘Flutes’, ‘One Pure Thought’ and ‘Over & Over’ are not only brilliant pop songs but, considering they were made by five of the geekiest-looking guys this side of Richard Ayoade, are also surprisingly effective at getting girls to dance.

No, it’s not the band itself but singer Alexis Taylor I’ve always found annoying. Ach, except that’s not strictly true either – in interviews he comes across as intelligent, self-aware and extremely passionate about music, plus he’s clearly a talented songwriter. No, ultimately what I find annoying is his voice. Winsome, weedy, remote and sexless, it’s a grey, M&S tie of a voice, a plastic spork of a voice, a 1.2% interest rate of a voice. And it’s probably why I’ve never really paid any attention to his side projects.

Having spent all week listening to ‘Between The Walls’, I’m now thinking that may have been something of an error. The third album from About Group, the semi-improvised band also consisting of free jazz forager Pat Thomas, John Coxon of Spring Heel Jack / Spiritualized, and legendary drummer Charles Hayward of This Heat and Camberwell Now fame, it is apparently the album they’ve spent the most time on thus far. Which actually just means it took three days to record rather than one or two.

Based around song skeletons that Taylor would play the others just enough of for them to get the jist (as he recently told The Quietus, “it was important to me that it was quite a quick thing, and no-one would really get the chance to say ‘Now I’ve worked out my part, I can do it properly.'”), it’s naturally a very live-sounding album, with several tracks feeling like different movements of the same theme rather than separate works in their own right. And, as is often the case with albums borne from lengthy jam sessions, there are moments that drag and parts that feel disjointed. Fortunately there are also moments that crackle and fizz.

Rather than crackle, instrumental intro ‘After Video’ tinkles like broken glass after a car crash, but a funkily ballsy cover of ‘Walk On By’ is on another level altogether. Taking its cues from the Isaac Hayes version rather than Dionne Warwick’s original, Taylor’s squeaky clean vocals actually provide a great counterpoint to the sneering, discordant keyboards and sick drumming behind it. While it loses focus halfway through it still rivals Farao’s cover of QOTSA’s ‘Go With The Flow’ for the best musical re-imagining we’ve heard recently.

You get the sense that the collision between the structured invention of Taylor’s usual work and the well-drilled abandon of Thomas et al is mutually beneficial. The bluesy saunter of ‘All Is Not Lost’ sees Taylor sounding more soulful than he ever has before (not difficult, admittedly), with p-funk synths sleazing it up and guitar coming in spurts and belches. ‘Words’ has a similar feel, except this time it’s laced with nasty synth drones, like razor blades in a bowl of tapioca. The twisted chimes and pulses of ‘Graph Paper’ is a less interesting dish though, with some of Hayward’s drumming seeming like it exists purely to remind you he’s there.

At this point the everything sinks into a slow, sultry haze, from which rises some of the most beautiful work on the album. The psychedelic guitars and Taylor’s quintessentially English vocals combine in Pink Floyd-ish fashion on ‘Make The World Laugh’, which loosely strolls along a cracked piece of Pavement, while ‘Love Because’ is simply beautiful. An extended intro sees the guitar buzzing about like a trapped bluebottle, before delicate keyboard chord pattern drifts in like smoke produced by a pipe stuffed entirely full of smouldering love. The band play with exquisite restraint, the sort that can only come from musicians who are really comfortable playing with each other.

The next few tracks don’t chime with quite as much clarity. Taylor’s vocals on ‘Nightlife/Sinking’ sound a little too loud against a more reflective backdrop, while Hayward’s pacy drum break seems slightly at odds with the fantastically frazzled drones that ebb and flow throughout ‘Untitled’. Meanwhile, ‘I Never Lock That Door’ flits uncomfortably between feeling hymnal and hackneyed, with Coxon seeming to lose interest altogether and pretend he’s playing on a Sun Araw track instead. Even less enjoyable is ‘Yes’, which revolves around a slightly sickening organ ostinato. It’s like asking to go to Alton Towers and instead being shoved onto a shit carousel.

Closing track ‘If You Can’t Love Me’ follows this lull, and manages to restore some quality. This is supposedly the last About Group album that will feature Charles Hayward, and if that’s the case then this is a fine swansong (albeit one that, erm, doesn’t feature any drums). It’s a bit like a more resigned King Curtis covering ‘Whiter Shade of Pale’, and it’s quite lovely.

Some, of course, will see this album as Thomas and Hayward’s free playing being neutered by excessive structure and instruction. Others will see the more improvised elements as muddying the clarity of Taylor’s songwriting (although he insists most Hot Chip songs are born from a similarly organic process). Whatever. They’ve made an album where Alexis Taylor’s voice hardly annoys me at all, so they must be doing something right… 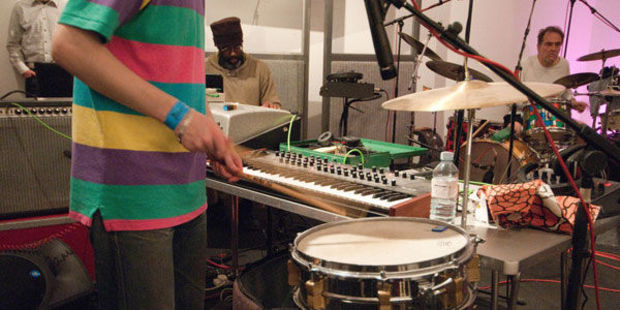 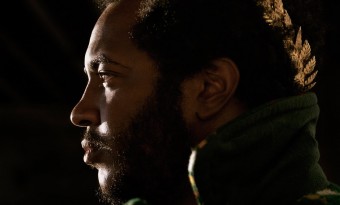 Recorded after the death of friend and collaborator Austin Peralta, Thundercat is joined once again by musical soulmate Flying Lotus to create a fitting tribute...
Read More