The title of Thundercat‘s debut album was ‘The Golden Age of Apocalypse’. This one is simply ‘Apocalypse’. The former was an exploratory, celebratory album that saw Thundercat, aka Stephen Bruner, revel in bashing the boundaries between soul, jazz and electronica with his big fat bass, layered with lashings of Brainfeeder‘s signature lysergic spiritualism. In many ways the latter is much the same, but the apocalypse here is a much more personal one.

The album was recorded after the death of Bruner’s close friend, collaborator and Brainfeeder cohort Austin Peralta last year, and Peralta’s passing casts a moving shadow over what is otherwise an album teeming with vivacity. Indeed, Bruner himself has admitted he struggles to listen to ‘Apocalypse’, such is the emotional weight it’s tethered to. Yet while knowing its background provides context to the album, not least the epic closing eulogy, it doesn’t feel like a mournful record.

A session bassist for many years who’s played with everyone from Erykah Badu to Suicidal Tendencies (and even joined a boyband in his teens), there were apparently always inklings that Bruner was frustrated by the limitations such a role entails (there’s a great anecdote in this interview with Okayplayer where he recalls being told to take a rare solo by Snoop Dogg. When he finished Snoop just looked at him and said, “you didn’t have to do all of that”. Bruner lost the gig soon after). It was his long-time friend and musical partner Steven ‘Flying Lotus’ Ellison who forced him to turn the scraps of his own music into an album, and FlyLo again assumes a producer role here alongside fellow Brainfeeder Mono/Poly.

The difference in Bruner’s relationships with both producers may be what gives ‘Apocalypse’ its restless, questing spirit. While he acknowledges FlyLo’s influence on ‘Apocalypse’ by admitting ‘you can smell it all over’, his interactions with Mono/Poly are rooted in playful antagonism: “We don’t even say hi to one another most of the time. If he’s having a good day I want to say something that will ruin it. If he’s having a bad day, I want to make it better”.

Fortunately he’s not so contrary with his audience. Though he shifts through a huge range of styles, like Gok Wan rummaging through a charity shop bargain bin he somehow always emerges in smooth style. The ensemble that Bruner sports on opening track ‘Tenfold’ is particularly slinky, with dark, murky and seriously sexy synths and bass combining to create something fast-paced yet deliciously languid. His faultless falsetto and a similarly Prince-like guitar solo are then stirred in to paint a picture that’s utterly purple.

Lead single ‘Heartbreaks + Setbacks’ is, if anything, even better – long, drawn out chords drip into each other like honey, while there aren’t many bassists with the chops to make such a busy bassline sound so fluid. Like ‘Tenfold’, the way different elements drop the emphasis on different beats makes for an interesting rhythmic mix. There are flashes of TV On The Radio’s command of mesmeric melody too, which is lucky considering FlyLo admitted on Twitter that “the inst alone was so good i was scared 4 vox”.

He needn’t have worried, although the next track, ‘The Life Aquatic’, is an instrumental, and something of a stylistic departure too. Revolving around a straightforward 4/4 beat that sounds like Bruner’s skinned an industrial techno track and made it into a velvet robe, even the bass is kept resolutely simple. When you’re as good a musician as he is it must be tempting to constantly fire off in several directions, but here he shows an impressive restraint.

Not for long mind. ‘Special Stage’ is a big bowl of cheese-topped noodles that immediately made me think of a shit Sega Saturn racing game (apparently I’m not alone, as this Pitchfork review makes the EXACT same comparison, even though the key sample here actually comes from a different Sega title, Sonic the Hedgehog). ‘Tron Song’, which is supposedly about Thundercat’s actual cat, is similarly meandering, but with a soulful verve that wouldn’t sound out of place on Stevie Wonder’s ‘Innervisions’ – at least until the snappily fractured beat kicks in.

‘Oh Sheit It’s X’ takes another stylistic leap, this time into funky glitterball territory. As a paean to ecstasy it’s amusingly honest – “I don’t know where the bathroom is / My friends are like “you should eat something” / But I’m not hungry, just gonna keep dancing in this corner, baby” – while musically it sits much more comfortably in the stomach than Daft Punk’s ‘Random Access Memories’ (as FlyLo alluded to on Twitter, “with no disrespect i heard the daft thing and was like. ohh shit.. u can take that how u will”).

The tired beat, boring vocals and irritating jazzy meandering of soul snoozer ‘Without You’ is a dip, but the album is quickly hammered back into shape by ‘Lotus and the Jondy’. Wonky chords wriggle around on a sweet old-school break, while Bruner rambles on about goblins and ice creams (you can tell these guys have taken a lot of DMT together).

From here the album takes on a more reverent tone. Fluttering keyboards float through ‘Evagelion’ like a breeze through reeds, although the resonance of ‘We’ll Die’ is slightly ruined by the weird throat clearing halfway through (perhaps a sign that Bruner wants everyone to know he doesn’t take himself too seriously).

The first section of closer “A Message for Austin / Praise the Lord / Enter the Void” is the album’s most emotional moment, even if it might come across a little cloying without FlyLo’s following context (again from Twitter): “u wanna see some sad shit.. see us try to record this song about @AustinPeralta … he would try to record. then he would cry […] id cry … hearing him try to fight thru crying to sing this.. damn. … so.. we gave up … we said… fuck it.. make the demo vocals sound as good as possible. i couldn’t finish it so i passed this song to @daddykev to mix the vox. i remember playing this for @strangelooptv and when i heard him cry i knew we did the right thing. i was also worried that nobody would get it but people who knew us or knew austin. so many people have told me its their favorite [though]”.

It’s still not my favourite but it’s hard not to be moved after reading that, and the album as a whole makes for a fitting tribute to Bruner’s fallen friend. He may not be able to listen to ‘Apocalypse’ in full thanks to its sad associations, but it’s a record that we’ll be returning to again and again… 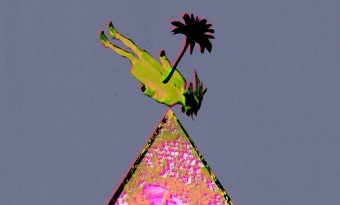 His long-term collaborator Seb Rochford may be the most prominent face, or at least hair, in modern British jazz, but Pete Wareham's spirited honking has been the most distinctive element of their bands over the last decade. Acoustic Ladyland, Polar Bear and Fulborn Teversham have all helped a genre that gets little mainstream attention these days cross over to new audiences, with a punk edge that's rarely been heard since Pigbag. While Rochford may not feature in Wareham's new outfit Melt Yourself Down (named after an obscure James Chance album), the saxophonist's form hasn't suffered; only he now seems determined to cross borders as well as genres. This is World Music not in the "it sounds a bit foreign so just shove it in there" sense, but because it sounds like everyone in the entire world playing at once. There will not be a more energetic record released this year - just a few minutes in and you half expect your speakers to start dripping sweat. Considering the pedigree of the band Wareham has assembled, the quality of the record should be no real surprise. Fellow saxophonist Shabaka Hutchings has played on The Heliocentrics' collaboration with Ethiopian jazz legend Mulatu Astatke, while drummer Tom Skinner plays alongside Hutchings in their band Sons of Kemet, which sees him up against the aforementioned Rochford in a percussive blitz. Bassist Ruth Goller exchanged meaty riffs with Wareham on the last Acoustic Ladyland album, Kushal Gaya's bizarre multi-lingual vocals usually augment the glorious racket of ZunZunEgui, percussionist Satin Singh's rhythms have featured everywhere from Supergrass albums to the musical 'Fela!', and electronics whizz Leafcutter John is a long-time Wareham collaborator. Together their noise can be summed up, quite simply, as a fucking blast. Wareham has stated that Melt Yourself Down is "the first project I’ve done where all the music has been written, rehearsed and recorded before any gigs", perhaps explaining that while the musical ideas are wide-ranging, the tracks themselves are surprisingly compact and dynamic. "There was an immediate chemistry," he enthused to London In Stereo. "The first tunes we played were ‘Release!’ and ‘Fix My Life’ which I brought to the first rehearsal and we nailed them right away. It felt amazing". Those two tracks kick the album off, and the mighty wallop they give your eardrums feels pretty amazing too. 'Fix Your Life' launches proceedings with brutal horns, clattering percussion and Gaya doing his best impression of a whooping, growling jazz goblin, while the afrobeat rhythms of 'Release!' power along at a tempo roughly equivalent to the one Kanye West's heartbeat reaches whenever he catches sight of his own reflection. The feeling of total abandonment twinned with intense repetition makes for a truly psychedelic experience. North African / Middle Eastern modes are spiced up with a dancehall beat on 'Tuna', but this isn't just a musical tourist cruise; or if it is, it's one where the band toss their passports into the sea, leap onto the harbour and run naked into the jungle. 'We Are Enough' takes a detour back to Wareham's jazz-punk roots though, with Gaya swapping phrases with the saxophones over hulking chunks of riff. This does have the knock-on effect of making tracks like 'Free Walk' sound a little lightweight mind, despite the percussion being sharp as a knife, but it's a rare lull. Indeed, the band starts simmering again soon after. Wareham and Hutchings play with a mind-blowingly nimble dexterity on 'Mouth To Mouth', the aural equivalent of watching a master sushi chef slice a salmon into sashimi in milliseconds, while Goller's growling bass backs them up like a seven foot sous chef brandishing a Fender cleaver. The closing 'Camel', meanwhile, is carnival music as Bakhtin might have described it: "the context in which distinct individual voices are heard, flourish and interact [...] "threshold" situations where regular conventions are broken or reversed and genuine dialogue becomes possible". In other words, it rocks like a mother; even unleashing a tidal wave of voodoo surf at one point. On paper, Melt Yourself Down sound like they'll simply produce a messy conglomeration of the playlist in the SOAS student union bar back when you used to be able to smoke draw in there. Yet they're too lively to simply provide a nice accompaniment to a pint of lager and an eighth of cheap bush-weed. Talking about the compositional process, Wareham mused about how "the instrumentation – no chords – allows me to write with space and dynamics, while keeping a rhythmic propulsion". Well if albums were capable of propelling you into space, the raw materials here are what NASA would be using as fuel. As we said, a fucking blast.
Read More