Join us for another edition of Single-Minded, where Dave’s probing ‘Question Time’ is joined by guests including Charlotte Gainsbourg’s ‘Deadly Valentine’, Wireheads’ ‘Wonderful Wizard’ and Monster Rally’s ‘Sunny Sloth’…

Habitat, the recent album by Toronto duo Beliefs, is well worth ensconcing yourself in as the nights grow cold. ‘Retreat (light the fire)’ gives a few good reasons as to why. Melding a chilly post-punk approach with warm, dissonant synths and understated but catchy vocals, Beliefs play their softer and harsher tendencies against each other to leave something that’s juuuuust right.

Despite spanning nineteen live and unreleased tracks, Charlotte Gainsbourg’s last album Stage Whisper was pretty disappointing in comparison to 2009’s IRM. Fortunately her new material suggests she’s back on top form. The electro-orchestral, piano-led grooves of ‘Deadly Valentine’ hark back to Gainsbourg’s stellar debut 5:55, although the French touch here is provided by Ed Banger’s SebastiAn rather than Air, who produced that album. Dev Hynes also appears in the video, albeit not noticeably on the track itself (which some might consider a blessing…)

Eminem may have stolen the political rap headlines this week with his anti-Trump freestyle, but while Dave doesn’t muster quite the same intensity on ‘Question Time’, his attacks on the British political system are way more focused and finessed. Over seven minutes he tackles issues ranging from the personal impact of NHS under-funding (his mum is a nurse) to the cost-cutting that led to the Grenfell Tower disaster.

However, it’s to his credit that he isn’t satisfied simply spearing the easiest targets such as Theresa May, instead keeping some of his hardest lines for his namesake ‘Dave’ Cameron, who he calls out for setting a bad example for his son by scuttling away following his failed EU referendum (“Are there bullies in his school? / And when you pick them up after class, can you feel his embarrassment?”).

And in case you’re thinking this is just another predictable offshoot of the #grime4corbyn movement, Dave is also unconvinced by the Labour leader’s big promises, urging him to “Prove to us you’re different / Don’t promise me anything”. Who knows, when David Dimbleby hangs up his patterned ties and quits hosting Question Time, Dave might just be the one to reinvigorate a show that’s increasingly defined by divisiveness, bitterness and ignorance.

The forthcoming album by Högni appears to be a must for Erased Tapes fans and railway enthusiasts alike. Two Trains is inspired by the only pair of locomotives to have ever operated in his home country of Iceland, and ‘Crash’ indicates it could be a runaway success. The first half is the sort of soulful electronica that Danish band When Saints Go Machine specialise in, bolstered by samples of breathing edited to resemble the rhythms of the railway. The second half arguably surpasses it, developing into a funky slice of acid house akin to the instrumental sections of Super Furry Animals’ spectacular ‘Slow Life’.

Originally premiered on our sister site MusicMap, ‘The Trap’ mixes darkly magical, dream-inspired imagery with curious and slightly queasy sound design. Perrudin’s silky voice is the bow that wraps it all together, keeping it loosely tied to the surface while exploring the murky depths…

Fresh produce from Monster Rally, an always reliable dispenser of appealing beats. ‘Sunny Sloth’ mixes the balmy samples of Avalanches with the charity shop exotica of L. Pierre, with the sort of anxiety-alleviating results that your doctor would be wary of prescribing in case they proved too addictive.

Another MusicMap premiere, this reggae-infused offering from Kenyan rapper Muthoni Drummer Queen is given some added juice courtesy of bass-loving Swiss beatmakers GR & HOOK. However it’s Muthoni’s flow that steals the show, matching M.I.A. for cut-and-thrust intensity before smoothing the edges for the melodious rallying cry of the chorus. If there’s any justice, the new MDQ album SHE should earn some some major crossover success.

The new EP by Prynce MINI declares him to be a ‘Jamaican Rockstar Inna London’, and it’s hard to disagree on this evidence. The clipped, crucial dancehall of ‘Lead I Lead’ is impossible to ignore, especially when the spiky pipe hook starts to embed itself deep inside your earholes.

A really beautiful piece of work beamed direct from the North Carolina bedroom of Sam Leidig. The lo-fi mesh of synths is reminiscent of Trough of Bowland by the mysterious Woodcraft Folk, but ‘Eyelash’ has a deep and melancholy wistfulness which pricks the heart in a way that album rarely manages. The squalling electronics keep it from softening too much while also guarding against repetitive fatigue.

Sampa The Great – Rhymes To The East

If you’re worried Sampha’s Mercury win has gone to his head, relax – this isn’t a re-branding exercise but the latest track by his near-namesake Sampa The Great, a Sydney-based Zambian MC who recently signed to Big Dada. Following a Swahili spoken-word introduction, her savoury flow soon takes hold over the glittering, eastern vibes of the beat, coming over like a more polished (or at least less gnarled) Gonjasufi.

Possibly the best offering so far from RIP Records’ ‘Introduces’ series, this blast of sweaty, febrile Glaswegian punk is apparently inspired by a chapter of Them: Adventures with Extremists, one of my favourite books by one of my favourite authors, Jon Ronson; in fact I literally just finished his most recent book So You’ve Been Publicly Shamed, which I’d also highly recommend [/bookclub]. While it’d be hard to convince anyone that Sweaty Palms are the musical equivalent of Ronson’s writing, the unflashy, humorous directness of ‘Queer Fatwa’ provides some comparison points. Mainly though this is just a great excuse to leap around screeching for a couple of minutes.

Tenth Court Records are one of the best Australian indie labels around at the moment, and Wireheads are perhaps their finest signings. ‘Wonderful Wizard’ is possibly the most immediate track from their new album Lightning Ears, a thrashy fuzzball with lyrics like an Adventure Time plot synopsis. Scuzzy yet spellbinding stuff…

Single-Minded: EERA, Four Tet and The Jet Age Of Tomorrow 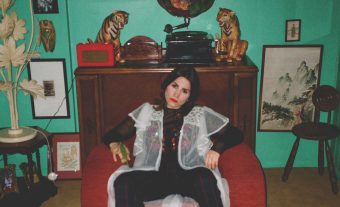 It's been a while since our last singles column but luckily these treats from EERA, clipping., METZ and more are still well within their use-by date...
Read More