Our latest round-up of new and newish tracks sees us indulging in White Wine, submitting to EMA’s ‘Breathalyzer’, and listening to the likes of ILK…

‘Cleveland’ is perhaps the ultimate expression of the Algiers sound – a gigantic lung bellowing righteous anguish while being poked with a sparking cattle prod. Gospel samples billow against the incandescent presence of Franklin James Fisher as he rails against an American justice system weighted heavily against black and brown people: “The hand that brings the gavel down is the hand that ties the noose…”

There may not have been a filler-free Arcade Fire album since Funeral, but there’s usually a couple of decent-to-great tracks on each release. The title track from Everything Now isn’t one of them but it is quite interesting, if only because it answers the age-old question ‘what would an Arcade Fire version of ‘Dancing Queen’ sound like?’ Mostly though it’s worthwhile simply for the sample of Francis Bebey’s ‘The Coffee Cola Song’ (which you should go and listen to now as it’s a thousand times better).

The perfect song for a humid day, with flute-y synths breezing out of a gorgeously placid instrumental. The sound of a gently purring, psychedelic air conditioner.

EMA’s ‘Breathalyzer’ is the aural equivalent of taking so many drugs that you can no longer feel your own face. The pulsing drones and half-heard whispers softly fry your brain, before EMA slowly turns up the temperature until your synapses start popping. A smashed hit.

FEMME unveils a new, two-step indebted sound, and damned if it doesn’t suit her to a tee. ‘Fire With Fire’ is a summer anthem so good it’s worth moving to a sunnier climate just so you can justify playing it more often.

Ghost Car – Woman In The Shadows

Likewise, this is garage rock so good it’s worth borrowing someone’s garage to listen to it in. Hell, while you’re in there why not try forming a band yourself? Although be aware that you’ll probably never produce anything half as good as ‘Woman In The Shadows’, which slowly increases its speed and ambulance-like “No More No More” refrain until you’re in danger of suffering an organ-induced heart attack.

The combination of producer Matthew Herbert and London trio ILK may turn out to be the modern day equivalent of Brian Eno’s collaborations with Talking Heads. Blending the jittery pop of Animal Collective with the distorted thumb pianos of Konono No 1, ‘Y U’ is the bracing sound of a band who seem to be refreshingly full of ideas. We could do with more their (sorry) ilk (so sorry).

The new album from sororal Portuguese duo Pega Monstro is a ruddy delight, and ‘Ó Miguel’ forms the perfect introduction to it. The shortest track on the record at just over two minutes, it could twirl away for another twenty before its exuberance would even slightly start to fade. Seriously, go listen to the whole thing.

While the mum-friendly ska of ‘Liar Liar’ got most of the attention, there were a few other decent protest songs knocking about in the lead-up to the recent election. While Frightened Rabbit’s ‘Fields of Wheat’ communicated its message with a quiet, dignified anger, Shame took a more lateral approach by re-releasing ‘Visa Vulture’, their ironic love song to Theresa May. It’s a subtle sonic weapon, musically seductive yet lyrically sickening (“my chargrilled meat inside your butter bread baps” being just one example of the band’s perverted pillow talk), with the effect that even the most hardened Tory would surely feel too nauseous to make it out to the polling station after hearing it.

The Sticks – Come Back

Sounding as if their instruments are literally made of twigs, The Sticks show ample aptitude for tuneage on ‘Come Back’, taken from their recently rediscovered ‘lost’ album Why Bother. We should be glad they did bother, as this is the sort of glimmering lo-fi find that deserves to be shared widely, not lost down the back of the sofa.

Apparently two of the three members of White Wine used to play in Menomena, and that makes sense when you hear the wonkily satisfying songwriting of ‘Killer Brilliance’. Brittle percussion, suspenseful harmonies and the occasional injection of adrenaline-flooding intensity mean we’ll be returning for another serving of this Leipzig vintage very soon.

Tokyo’s Yoshimi is apparently the originator of the microgenre ‘Japanese Hell Trap’ (and it doesn’t get much more micro than a genre with literally only one practitioner). ‘Mountain People’, released via the excellent Dream Catalogue, is less challenging than that style suggest, but it still kicks. Dark, distorted throbs play off against an otherwise airy backdrop, even if there’s clearly a chill in its insidious wind… 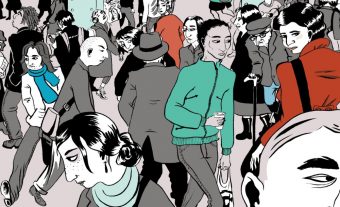 Mountain Goats go goth, Shabazz Palaces shine a light and Jlin rises to the challenge - all this and much, much more in our latest singles column...
Read More