From Com Truise’s trip into the uncanny valley to incredible animated efforts for Nick Mulvey, M83 and Father John Misty, take a look at our eleven favourite music videos from the last couple of months…

The new Blade Runner film is driving a reawakened fascination with all things replicant, although Com Truise’s descent into the uncanny valley is more reminiscent of The Stepford Wives, Black Mirror and even Yorgos Lanthimos’ The Lobster. Directors Will Joines & Karrie Crouse opt for steady, stylish zooms to match the mid-tempo pace of ‘Propagation’, while Trieste Kelly Dunn deserves huge credit for her portrayal of an android who starts developing self-awareness…

I find myself regularly debating the artistic merits of Father John Misty with his many fans, but there’s no arguing with the quality of this video. While the song’s ‘careful what you wish for’ vision of post-revolution chaos may be a little too Centrist Dad for some, director Chris Hopewell (also responsible for Radiohead’s ‘Burn The Witch’ video) frames it in such a beautifully animated stop-motion environment that it’s impossible not to be swept up as the Elton-esque chorus kicks in. Can we have a spin-off for the Hells Angels cockroaches?

King Krule’s another one I’ve often felt a bit ambivalent about, but again this is a cracker of a video. Boasting some Gondry-worthy jump cuts, director Frank Lebon develops a drowsy, woolly ambience that befits the song’s jet-lagged jazziness. (Lebon’s recent video for Krule’s mates Mount Kimbie is also well worth a watch.)

Using striking, saddening and occasionally eerie footage of Berlin and Potsdam’s post-war wreckage, some of it previously unseen, Lea Porcelain fulfil their stated ambition to “provoke a feeling of understanding on how important it is to keep the peace in our everyday lives and politics towards other nations”. It’s a lesson that feels particularly pertinent right now.

One of last summer’s big anthems took a long time to receive the video treatment, although not for want of trying; David Wilson’s semi-animated effort for ‘Do It, Try It’ went through a 15-month post-delivery process, with the director worrying it might never see the light of day. Thankfully it did, as Wilson’s tribute to the unbridled creativity that can be released just by giving kids some crayons is masterfully executed. As is the boy’s monumental belch at the end. (Head to LBB for a worthwhile interview with Wilson about the making of the video, which comes with a wedge of sketches and behind the scenes images.)

Nick Mulvey teams up with Iranian filmmaker Majid Adin for an impressive animation inspired by the refugee experience (and created in partnership with Help Refugees UK). The way Adin, a refugee himself, plays with perspective, pattern and metre makes ‘Myela’ both beguiling and impressively fluent, with the theme of separation emphasised through the canny use of just two colours throughout most of it.

Imagine if Steve Jackson and Ian Livingstone had jacked in the usual fantasy scenarios of their ‘Choose Your Own Adventure’ books in favour of a new quest where the protagonist is the tour manager of a Toronto punk band, and then released it as a Sega Genesis game rather than a book. Well, that’s pretty much the premise for ‘Old Wounds’, a gung-ho expedition into the beer and pizza-fuelled world of PUP, where YOU call the shots. Apparently there are 28 different ways to die, and chances are you’ll experience most of them before getting to the end…

Even if you weren’t blown away by Stormzy’s debut album Gang Signs & Prayer, this 15-minute film version exploring some of its key themes is still well worth a watch. It’s a film about the sorts of decisions the MC had to make growing up, and as he narrates at the beginning, “back then, often, you never made the right decision”. Abdul Basit is particularly good as the younger version of the protagonist, while the way the narrative is interspersed with Stormzy performing tracks from the album in the stunning, pastel-hued environs of La Muralla Roja in Spain sends a positive message: this is where you can end up when you ignore the inner demons and start making the right moves. It’s worth taking 15 minutes out of your day to watch the whole thing, while there’s also an interesting interview with director Rollo Jackson over on It’s Nice That.

A painstaking creation by LAMAR+NIK that apparently took 5,566 different stickers to make, although you wouldn’t be surprised if they’d used closer to the half-mil of the title. An inventive selection of locations keeps it from being just a gimmick, with the abandoned draughts board being a personal favourite…

L.A. rapper Waju proves nothing is beyond his reach in the video for ‘If U Wanna’ – literally. Director Dan Carr turns him into a less creepy version of Mr Tickle during a surreal four minutes with a sad (albeit amusing) ending…

We end this edition of MPEGs XI in Magaluf, where the one-shot video for Warhaus’ ‘Mad World’ was filmed. While on the face of it simply a testament to the power of alcohol to convince people to dance like bellends in front of a camera, there’s something undeniably engrossing about the slow-motion, neon carnival captured onscreen… 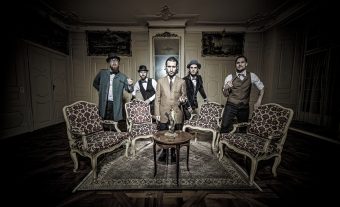 Groombridge don't do things by halves - they do things by eight halves. Check out the epic four-part video for 'Der Specht' exclusively on The Monitors...
Read More