(Look, don’t question the maths, OK? Just check it out above. Jeez.)

The story revolves around four mysterious, and perhaps not entirely trustworthy characters: The Alchemist, The Executor, The Gambler and The Boxer. Taking place in an isolated rural setting, ‘Der Specht’ also features an armed robbery, a suspicious package and a card game played for foreign currency, the cards marked by such seemingly unrelated names as Jesus, Mac Gyver, Celine Dion and Pablo Escobar.

What does it all mean? You’ll have to watch to find out, but the superb cinematography and classy wardrobe makes ‘Der Specht’ feel like a Swiss version of Deadwood. Even better, the music is a searing, riff-laden delight, featuring four fresh Groombridge tracks likely to bore a hole into the heart of anyone disappointed by the latest Queens of the Stone Age album. Much like a woodpecker in fact, the bird that inspired not only the album but the accompanying lyric booklet, which features illustrations by contributors aged two to ninety – take a look here.

“All good things come in fours – at least that’s how it should be. The video clips accompanying the new album come in four parts that couldn’t be any more multi-layered. Every clip is its own story yet has overlapping parts that repeat themselves in the other clips – in order to completely understand the story line, you have to have seen all four parts. In short, the story is about a suitcase with mysterious content, that which is only revealed at the very end.

“In the ‘intro’ of every song one of the band members is introduced, who then keeps his role throughout the whole story. But, what is the band trying to communicate with this mesmerising video experience? Maybe to get us to understand how much effort goes into producing a new rock album? Or maybe that robberies can have a positive side? Or more so, that in the end, the bass player is the one who calls the shots? We can only guess… but, we have to watch it all one more time!”

Der Specht by Groombridge drops this Friday via PROLOG Music – pre-order it here. 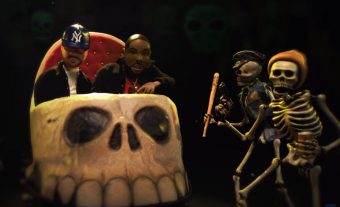 Our round-up of last month’s best music videos finds Feist in a fight with herself while Run The Jewels attempt to avoid capture...
Read More