Since people first started crowding round to get a glimpse of Archy Marshall in his first incarnation (as Zoo Kid in 2010), he’s somehow managed to maintain a constant level of hype despite seemingly being pretty ambivalent towards it. There have been name changes, dubious hip-hop side projects, radio interviews where he sounded like he’d just swallowed an entire packet of temazepam and, crucially, only the occasional dribble of new music under his main moniker. And yet, people’s fascination with South London’s favourite BRIT School drop-out hasn’t waned.

Well, maybe slightly. This long-awaited debut album is currently sitting at 91 in the UK album charts; hardly a disaster for a teenage songwriter’s debut album, sure, but there have been times when you suspect it could’ve cracked the top twenty, especially with the might of indie behemoth XL Recordings behind it. Perhaps the unusual move of putting it out on a Saturday didn’t help, but that decision also sums up what’s so great about King Krule. The release was timed to coincide with his 19th birthday, so as to draw a symbolic line between his past (some material on 6 Feet Beneath the Moon was supposedly written when he was 12) and what threatens to be a thrilling future. In an age when most musicians seem to be better versed in PR skills than piano scales, such gestures are actually pretty refreshing.

As is the album itself. Yet it’s also meandering and mercurial, proving hard to pin down and demanding close attention. The good news is that the time you put in to deciphering it is as rewarding as the time that clearly went into making it. Even better, he doesn’t even care if you pay for it, telling The Guardian, “if you can illegally download my album, fuck it, do it! I illegally downloaded all of my music”. Cheers mate!

First on the record, and thus on your Soulseek search bar, is ‘Easy Easy’. His bizarre, brutish voice immediately takes centre stage against a stark backdrop: this is punk stripped to its bare bones and gently laid to rest. It’s an agitated, antsy track, which sees Marshall railing against the relentless low level stress that is modern urban life: dead end jobs, people hassling you when you’re on the phone and, worst of all, supermarkets flogging out-of-date sandwiches (“Tesco’s stealing my money”). There’s more frustration on ‘Has This Hit’, with Marshall complaining, “If you’re kind then people are cunts / They pull stunts to stunt your progress”. Cymbals crash like a man slapping himself in the face and his voice is at its most guttural, but the music is wonderfully weightless.

Unlike the tracks that bookend it. The throwaway guitar hook and Bargain Bucket beat of ‘Border Line’ produce a burst of sunshine, but it’s a beam akin to the one that streams, unwanted, through your curtains when you’re lying in bed, desperately wishing you weren’t wasting the day. A different sort of gravity exerts itself on ‘Foreign 2’, which is like trying to read a book underwater. Everything seems murkily distorted, and despite the uptempo beat, you feel yourself sinking down…

The album continues to lurch like a pitching ship. ‘Ceiling’ exhibits the wonkiness of Micachu viewed through stained glass. He could probably mould its choo-choo train rhythms and bouncy bassline into a number one if he was that way inclined. Then Marshall gets his croon on for the Chet Baker-aping ‘Baby Blue’. The suavely elegiac guitar chords provide a fitting canvas for him to paint typically poetic lyrics like, “My sandpaper sigh / Engraves a line / into the rust of your tongue”.

Continuing in that vein, ‘Cementality’ is Marshall at his most beat poet, so enjoyment of it probably depends on whether you think Jack Kerouac is brilliant or bollocks. A song about throwing yourself onto concrete from a great height, set against a typically minimal backdrop, only a brief patch of mellifluous guitar intrudes upon its soft keyboard chords. There’s a deft touch of drama too, when the track cuts out abruptly on the final word of the line: “Brain leave me be, can’t you see that these eyes are shut?”

The near-silence is broken by the anguished groan that kicks off jazz rattler ‘A Lizard State’. While Marshall’s usual cold, reverberating guitar sound seems a little out of place next to the rapid-fire drums and sax stabs, his vocal dexterity is shown off to its full extent. It’s the most energetic song on the album, and seems even more so in contrast to the tracks that follow it. The odd sample of Edward Woodward in The Wicker Man is the most notable thing about ‘Will I Come’, while ‘Ocean Bed’ sounds a little too much like several other things here.

‘Nepture Estate’ is a little perkier. A rotating piano phrase delicately treads over a trip-hop rhythm, with Marshall adrift in a pool of romantic desperation: “Can’t you bare just one more night? / I wanna be with you / I wanna be used”. It’s a little scmaltzy, but rather nice all the same. ‘The Krockadile’ is altogether snappier, a vortex of words and guitars engineered by a restless triple-time beat. It’s so fluid and fine it could be bottled and sold by the shot.

Breakthrough track ‘Out Getting Ribs’ crops up near the end, and still sounds brilliant. Lyrically it’s a little more adolescent compared to his more recent stuff, but then he himself has admitted that his early lyrics are “shit” and, to be fair, he was only 16 at the time. ‘Bathed In Grey’ then strolls down a descending staircase of piano phrases and muted beats, as Marshall saunters off, alone, into the distance. A fine finish.

This is indeed a lonely album. It feels like the night-time diary of someone who can’t really communicate during the day. And it’s all the more powerful for that. “People are just being given what they listen to, and I kind of wanna change that,” he told The Stool Pigeon’s Alex Denney last year. “There’s no substance, no aggression, no pain. No one’s talking about really being in pain”.

That’s ultimately why, while much of the music is fantastic, his voice, the conduit of his anguish, takes centre stage. More than that, it drives home the fact that singing ability isn’t reliant on replicating the rotters climbing out of the X-Factor cesspit. A unique voice seems hard to come by these days, and while Marshall’s is weird, shifting, and occasionally ugly, his pitch and delivery is always bang on the money. And while 6 Feet Beneath the Moon is far from the defining statement many were hoping for, it’s utterly unlike anything else that’s out right now. It resists being spoonfed, and that’s exactly why you should be shovelling it down.

Shigeto - No Better Time Than Now 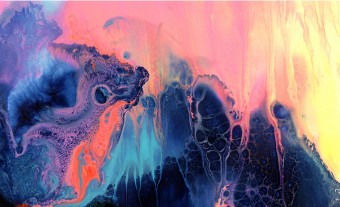 As origins stories go, being crippled by rogue cheese is pretty bizarre. Yet that's what turned Shigeto from an aspiring jazz drummer into a musical superhero...
Read More