I think it is fair to say that “We’re pretty fucked” is not an all-together unrealistic appraisal of global current affairs. Yes, even avocados are bad for the environment. (So there, you clean eater you!)

With that somewhat cynical mindset I was naturally intrigued by an album named Holiday Destination, which also happens to have a bombed-out shell of a building on its cover.

With crises abound – some forever ongoing, some only just begun – and a looming sense that “the bad guys they are winning”, to use Nadine Shah’s words, there surely is plenty to rage and rail against. Eventually someone comes along and articulates our present-day catastrophes bang on. Not one for over-complicating or understating, Shah tells it how it is: There is a fascist in the White House. Insular tourists feel inconvenienced by refugees. Brexit. Hitting 30 kinda sucks. Eating clean is, well, rubbish. Climate change… oh let’s not go there. Spoiler alert: Nadine Shah does!

Shah’s voice on Holiday Destination is, perhaps deliberately, a little more restrained than on her two previous albums but still very much the focus of each song: deep, strong, sultry and even a little world-weary on the moody ‘Yes Men’. Despite its socio-political insight, Holiday Destination is never in danger of being sanctimonious downer material. I think Nadine Shah accomplishes this stunt more elegantly than PJ Harvey did on The Hope Six Demolition Project.

Holiday Destination is filled to the brim with clever songwriting, and gleams with a post-punk sheen that is easy on the ear.

Opener ‘Place like This’ enthrals with some irresistibly funky riffs while at the same time trying to give a voice to refugees stranded on Greek islands. The lean, funked-up bassline moves the tune along and your hips with it.

I would assume that most of us think our summer holidays should be “The best time of your lives”. The excellent title track ‘Holiday Destination’ gives a damning verdict on tourism 2.0 where such naive expectations are being washed up against the cruder geopolitical realities of our times. Shah captures this lost idyll and replaces it with brooding, creeping guilt when she asks over and over “How you gonna sleep tonight?”. The song’s pleasure-seeking post-punk allure, however, almost robs it of its political message. I couldn’t get enough of this tune.

‘2016’ is humorous but resigned at the same time as it vents about the disconnect between what people talk about and do socially and what is really going on. The conspicuous absence of so many elephants in the room makes Shah retreat into her own head.

‘Out of the Way’ is angry and scared about the xenophobia and racism unearthed by the Brexit vote in the UK. The thumping trumpet outro seems to render all this fury impotent but the damage has been done. ‘Evil’, another highlight of the album with its earthy rock guitar chorus, further dissects the topic of prejudice. Here, Shah’s astute lyrics really get to the core: “Look, I’m standing right here before you / I can only offer what I’ve been taught / And you look on with eyes from another / How can I compete with an ingrained thought”.

Nadine Shah’s vocal abilities dominate on the outstanding ‘Relief’. Following her vocal chords down to the nooks and crannies of her lingering inflections is a pleasure. Shah cites Nina Simone as her inspiration and does her some justice. ‘Relief’ is the downright catchiest track on the album: smooth, full of longing, jazzy even. ‘Jolly Sailor’ works in a similar vein and finally helps us unwind with soft keys, a subdued bass melody, mild guitars and the anticipation of a sweet, carefree descent into the bacchanal.

‘Mother fighter’ is exalted, sturdy and outward-looking. The instrumentals remind me of the Yeah Yeah Yeahs’ sound on ‘Despair’. Whilst perhaps not the most original track on the album, ‘Mother fighter’ is still testimony to Shah’s versatility and absolute ability to create a difficult album with a wider appeal.

Holiday Destination is a stunning record and succeeds on so many levels. Political to the core, self-aware and compassionate, each track is packed with novel musical ideas, and then there is Nadine Shah’s simply extraordinary tone of voice that completely befits each of the record’s varied moods. For me, Holiday Destination is a solid contender for album of the year. 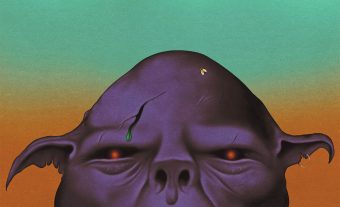 Oh Sees agnostic Jake Smith had his head turned by recent single ‘Animated Violence’, but would the rest of the band’s 19th LP manage to fully convert him?
Read More