From Animal Collective to Frank Zappa, Cab Calloway to Dan Deacon, Baltimore seems to spawn idiosyncratic and innovative musicians at rate that makes it seem like a giant, psychedelic gestational sac. Albert Bagman is the latest artist to bathe in the Maryland metropolis’ creative fluid, and we’re happy to present the first look at his new video for ‘Cliché’, which presents the musician at his mysterious best.

The ‘Bagman’ part of his name derives from the burlap sack that perennially masks his face, and with no social media profiles (a rarity in this day and age) his digital appearance is just as discreet. Thus it’s no surprise that the other characters in the video for ‘Cliché’ are similarly secretive, from the classically-shrouded spirits that roam his house, to the button-eyed beauty he brings to life in the cutest occult ceremony you’re ever likely to see.

It’s a totally charming creation – endearingly reminiscent of the Department Of Eagles video for ‘No One Does It Like You’ (aka one of the best music videos ever made) – and that extends to the music too. Lilting from gently anthemic verses to chiming instrumental sections, the songcraft calls to mind early Arcade Fire, although Bagman’s voice is more similar to Marcus Mumford’s than Win Butler’s (don’t worry though, there isn’t a stadium folk fiddler in sight).

The track is taken from a forthcoming EP, fittingly titled Burlap, which is released a week today. It shows a couple of other sides to the Albert Bagman enigma, including the creepy, whirring stomp of ‘Anchor’ (a track you can image a cheerful Leatherface cavorting around to) and the lonesome, percussive waltz of ‘Chase Out The Dead’. For the extremely reasonable price of nowt, you really can’t go wrong.

While his sack is sure to remain firmly secured to his head, with music like this it’s unlikely Albert Bagman will be able to retain his anonymity for long… 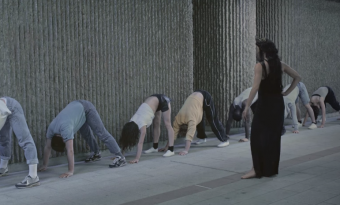 Worth watching even if the term 'electro swing' makes you sick, Caravan Palace's new video is sure to make anyone who's ever owned a pet and a laser pen chuckle...
Read More