Of the many improbable things I never thought I’d witness, pretty high up on the list was Arcade Fire remodelling their wintry love melancholia sound in a textured haze of Haitian rara beats and dance funk. On paper, it sounds ambitious to the point of being ridiculous. If the hype preceding the release of Reflektor had included a description akin to the above, it would have been divisive: Arcade Fire fans staying loyal, sceptics laughing or shaking their heads, standers by seeming vaguely interested. It wouldn’t have been a surprise to see an album of this description bomb in the sphere of those with unbiased taste. Personally I’d disregarded the idea that Arcade Fire could make anything as good as the eponymous debut EP or Funeral: they’re big enough not to have to give a fuck about what anyone has to say about their music.

But none of this matters anyway, because Reflektor is an amazing record. Enchanting, transcendental and exploratory, Arcade Fire have tapped into their lifeblood with this album. They haven’t traded in their contemplative tone for dancefloor hits either: renowned as pop-philosophers, Arcade Fire have woven influences as disparate as classical mythology and carnival beats, stirring in some poetical commentary on our ‘reflective age’.

Rather than pretentiously forcing together vastly different subjects, these potentially contradictory elements are united by way of Arcade Fire’s authentic conviction and powerful expression. After what Win Butler called a ‘life-changing’ trip to Haiti, home to Régine Chassagne’s parents before they fled the country, the band have revealed a surprising propensity towards audio experimentalism. They’ve exposed new sides of the band outside the studio too, engaging in intricate pre-release marketing techniques, delighting in playful stage trickery and most importantly becoming even more passionately engaged in charity and relief work.


In the opening song, ‘Reflektor’, the influence of co-producer James Murphy – previously of LCD Soundsystem – is immediately apparent. With David Bowie singing backup vocals, this track harbours uneasy themes of disconnection and plants the unlikely seed of Arcade Fire-style dance music. As with any ambitious album, there are parts that don’t quite make the leap, and it’s difficult to avoid the feeling that tracks like these should be cut down to create shorter and more incisive musical experiences. The length of certain songs means that they start weakly but progress into something more familiar or interesting – ‘Joan of Arc’ is a definite culprit – while ‘Here Comes The Night Time’ does the same thing backwards. Beginning with a fast and ambitious carnival beat, it sounds amazing, but slows to half time in all of thirty seconds: Arcade Fire most definitely wimped out of making an entire song based on this amazing sound, and the whole thing ends up sounding like a really boring Vampire Weekend song.

In a way Reflektor acts as a clarification, as well as an interesting record, putting the history and discography of Arcade Fire in perspective. Even albums that I didn’t like, such as Neon Bible, I can see in a new light now: this music is about conviction and self-expression, Arcade Fire think and feel deeply about so many elements of life and this is their medium to bring those reflections to the masses. In Win Butler’s own words, “You don’t necessarily want to get bigger for money’s sake or popularity’s sake, but you do want more people to hear your music if you think your music is good and would have something relevant to say about life.” Job done, Butler. 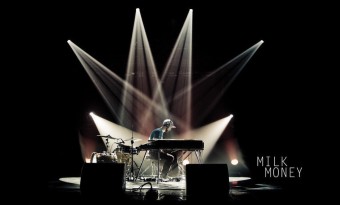