A column compiling club-friendly sounds that still make sense in your living room. This month Jamie Miller highlights the new sound of Durbans DJ Lag and the classic tracks of Detroit delivered by Woebot…

First up, we have an hour-long mix from Sky H1, an artist who produced one of 2016’s best records with her Motion EP on Pan sub-label Codes. For anyone who enjoyed that release, this mix will be a treat. It’s full of glossy, highly emotional club tracks that lurch and then slide with varied percussive pace. The Belgian producer’s taste is singular and the mix is a selection of some of the most current and exciting club producers that are helping her shape the sounds of 2017.

Another fresh as hell mix in January came from South African and Gqom scene head DJ Lag. The Durban house sound of Gqom broke out to a wider audience just over a year ago with releases on Goon Club Allstars and the Gqom Oh! compilation getting lots of attention from fans of unpredictable lo-fi house sounds. The tracks here are dark, DIY FruityLoops productions that maintain a feeling of celebration through their understated nature. Everything in the mix is propulsive and stripped back without ever leaving you feeling like there is anything missing.

The ever-reliable LA based blog and label Astral Plane has brought together five bootlegs by some of its associated artists to give away as a free EP entitled ‘NEW YR NEW US’. The tracklist features reworks by Kablam, and also Why Be going to work on this column’s favourite Sky H1. The best tracks here are messy, sprawling and intense but always thrilling, with plenty of hooks to hold onto while everything else in the track is collapsing around them.

After all that newness and excitement let’s finish with some serious classics. This is very serious, nearly four hours of the best and most important techno to come out of Detroit between ’85-’95. The mix is compiled by Woebot who has produced so many mixes and articles for his blog, which has been a history lesson and voyage of musical discovery for me. You can spend a very long time on there gaining so much from his unique perspective. This mix is pretty much chronological and takes us through the waves of the Detroit Techno sound. There’s not much to say that hasn’t already been said about this stuff. The mix features the Belleville Three, Underground Resistance and Robert Hood as you would expect. Enjoy. 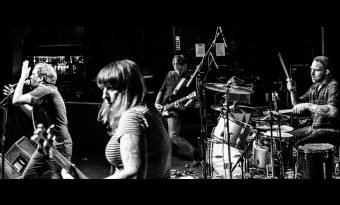 We chatted to Nottingham's Grey Hairs about their excellent second album, tripping on coaches and the serious business of drinking...
Read More