As I descend the steps into The Underworld, Camden’s very own temple of riff, I am greeted by the quake and lurch of UK doom-trio Wizard Fight. This welcome is soon accompanied by the disappointing realisation that their set is coming to a close and the recent train-bastardry that has plagued the south of London has now deprived me of seeing one of Britain’s heaviest purveyors of groove. From the packed nature of the pit and the roar that escorts Wizard Fight from the stage it is clear that I have just missed a stellar set.

With such an irritating start to the evening I am eager to hear what Brighton sludge-quartet Limb have to offer. Tonight’s line-up harbours a wealth of heavy talent but it is this young emerging band that I have come to see. Having followed them from their impressive self-titled debut through to last year’s more-polished effort Terminal, I am keen to see if they can translate their gargantuan bellow and groove to the sticky floors of The Camden Underworld. As the kick-bass intro that ignites ‘Gift Of The Sun’ crumbles under its own weight and Rob Hoey’s epic growl thunders in, the band are met with a sea of heads banging in half-time, a sure-fire omen that the sludge-gods are throwing horns tonight.

Next up is ‘Ghost Dance’, one of the standouts from Terminal. Today’s pan-Atlantic well of sludge and stoner-rock bands is currently overflowing and sadly the ease with which a band can fall foul of just tweaking a Sabbath riff and turning up the fuzz is a disease that plagues many a record. What sets Limb apart from their peers in such an over-populated genre is Rob Hoey’s guttural voice. This is not to say Limb’s riffs are lacking one bit but they are painted from a very familiar palette. So when Hoey screams ‘the mind is the heart, and the heart’s just meat’ and the girth in the gurgle proves to be just as ridiculous live, I, along with the rest of Limb’s hoard, gleefully bang my fucking head.

The band proceed to pile their way through an impressive set of songs with the bludgeoning gallop of Johnny Cash inspired, future-sludge-classic ‘Down By The Banks’ a particular highlight. There is something truly special about a young band growing into their potential and as Tom Mowforth and Sam Cooper’s monstrous rhythm section wallops its way through Pat Pask’s outrageous riff you get the sense that if Limb can maintain a distance from the tropes that litter the sludge landscape they should establish themselves as genuine heavyweights and headline this bill next time around.

In the six years since their inception Gurt have become one of the flag-bearers for the British metal scene. A relentless touring schedule combined with a slew of EPs, along with their sleazy debut long-player Horrendosarus, have established them as London’s go-to band for promoters looking to draw a strong local crowd. I originally stumbled across Gurt as the support act for Dopefight’s bittersweet farewell back in 2012. It’s clear that the last four years have induced an expansion of both the fun and hefty groove the band present live. Gareth Kelly is still an endearingly dry-witted front man and over half a decade of touring has honed Gurt into a slick live prospect. ‘Hoboreaper’ and ‘Horrednosaurus’ are both introduced with vintage Kelly quips and the band’s swampy trench-foot rumble serves as a suitably greasy hors d’oeuvre for tour partner Dopethrone’s hotly anticipated main course.

If I had to assemble a desert-island music-stash, then along with Bongzilla’s Gateway, Dopethrone’s sophomore record Dark Foil would be a smoke-filled shoe-in. Having been lucky enough to catch them at last year’s Desertfest it comes as no surprise that the party atmosphere in this sweaty cavern boils over the second the opening riff to Dark Foil’s title track rings out. Tales of heroin abuse have never been so eagerly received and the grainy fuzz of Vince Houde’s guitar combines perfectly with Vyk’s bong-trembling bass. There is something darkly beautiful about yelling ‘chase the dragon’ along with hundreds of other metal fans.

Always renowned for their party vibes, Dopethrone make perfect touring-partners for Gurt and the evening reaches its peak when Gurt and Limb are invited on stage for Hochelaga’s standout track; the sumptuously named ‘Scum Fuck Blues’. Again the crowd join in for the bludgeon and as the nihilist party-mantra ‘Smoke, Drink, Die’ reverberates around The Underworld all memories of train-bastardry dissipate in a storm of fuzz, yelling and fun. Tonight has been an absolute treat for any self-respecting sludge enthusiast and Dopethrone more than deserve their reputation as a great night out.

Godspeed You! Black Emperor @ The Coronet 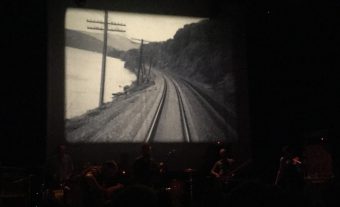