On their fourteenth album Innocence Reaches, the insanely prolific Of Montreal continue their multi-coloured, densely textured exploration into the erupting head-spews and psychic-flexes of main man Kevin Barnes. Investigating the dark side of relationships with more panache and swagger than a boat full of Prince look-a-likes on a group holiday to the Bahamas.

I’ve been a big fan of Of Montreal since 2007’s Hissing Fauna Are You The Destroyer?, an album that dealt with Barnes’ depression and relationship with then wife Nina Twin. The album’s emotional desperation also resulted in the creation of Barnes’ imaginary alter-ego Georgie Fruit.

This led Of Montreal down a rabbit hole of multi-sectioned über funk-disco, with the character of Georgie Fruit running wild over the next few releases; Skeletal Lamping (2008) a brain-damagingly brilliant sex-freak workout, and the more straight up R & B wonk-pop of False Priest (2010) featuring Janelle Monáe and Solange Knowles. After the breakdown of Barnes’ marriage to Nina Twin, and a possible overdose of kaleidoscopic funk that culminated in 2012’s darker Paralytic Stalks, it felt like Of Montreal had reached a turning point.

Thus Of Montreal’s last two releases (2013’s Lousy With Sylvian Briar and last year’s Aureate Gloom) saw Barnes strip back the Of Montreal sound, embracing a more direct guitar based style influenced by ’70s new wave bands such as Television and Talking Heads, filtering the CBGB’s feel through Barnes’ peculiar psychedelic prism with great success. With Innocence Reaches Of Montreal have returned their influences to the present day and have created one of their most accessible and danceable records to date.

Opener ‘Let’s Relate’ is one of the most silkily sexy songs Barnes has ever written, a joyous high energy banger that raises the curtain in brilliant, explosive fashion. Its warped euro dance-pop is reminiscent of Hissing Fauna Are You The Destroyer track ‘Heimdalsgate Like a Promethean Curse‘. It’s a song that will go down a storm live and is a sign of ‘Innocence Reaches’ embracement of synthetic pop tropes. It has been a while since Of Montreal have sounded so darned modern.

Similarly, latter album track ‘A Sport And A Pastime’ is an actual proper electronic R&B pop song. Somewhere this song is number one in the charts, rather than Justin fucking Bieber. Its cold, slow synthetic funk – all clicks and low end rumbling bass – ooze class.

‘It’s Different For Girls’ is classic Of Montreal and wouldn’t feel out of place on early albums Satanic Panic in The Attic or Sunlandic Twins. It’s a stompy jittery disco romp, filled with a naively simplistic, but well-meaning, political ideology (come to my lecture on radical feminism if you’d like me to expand on this) that venerates women to a hagiographical level. It sums up Barnes’ lyrical predicament to a tee, an intense ‘all or nothing’ attitude that might ultimately cause tumult for his personal life but fuel for his music.

With each Of Montreal release comes a whole freight train of emotional baggage and one could spend an age carefully picking apart the psychological landscapes of Barnes’ world. It’s an exhaustive and morphing evolution of identity, relationships and the self, and that has always been part of the fun of listening to Of Montreal. Innocence Reaches is no different.

In truly restless fashion ‘Gratuitous Abysses’ changes stylistic gear, harking back to flower-pop glam territory. It is filled with lighthearted, high-pitched woo-hoos all sunny and nice like. ‘I was waiting for my friend he became an ocean just watch me drown’. Coming over all Marc Bolan in Barnes’ quavering vocals.

Elsewhere the album explores Barnes’ frayed and fractured relationships post marriage. ‘My Fair Lady’ features a classic Of Montreal bassline with the lyrics detailing: ‘My lady’s back at home cutting herself and sending me photographs, dismantling our love, killing it to please other people’.

The flutes which crept into the music of Paralytic Stalks come into beautifully melancholy effect, welcoming the listener to the propulsive disco chorus: ‘Because you’ve been so damaged I have to give all the love that was meant for you to somebody else.’ These lyrics display the joy Barnes finds in juxtaposing traumatic words with upbeat music. The song ends in rubbernecking night-funk as Barnes pleads: ‘Can’t you change?’ while a lithe sax howl licks at the moonlit scars and the song disappears.

Innocence Reaches sees Barnes at his most venomous. The album is filled with hurt and bitterness aimed at unnamed acquaintances and himself. ‘Def Pacts’ features two of the most vitriolic lines of the album: ‘Of course this world would be better without you’ and ‘You can’t martyr yourself if no one gives a fuck’. The song eventually melts into a beautiful elegiac strum, with Barnes gently, remorsefully, wishing: ‘Won’t you be good to me, won’t you be fair, won’t you always be sweet, won’t you always be there’.

No one is as good as obliquely summing up the confused pain and self-destruction of a tumultuous relationship as Barnes. To quote ‘The Past Is a Grotesque Animal’ (from Hissing Fauna Are You The Destroyer): ‘Let’s tear our fucking bodies apart’

The damaged lyrics of ‘Chaos Arpeggiating’ continue to belie the confident and glamorous music: ‘Your last violent freak out was a eulogy to us, I was truly touched that you still cared enough to throw psychotic fits’.

Underneath the pizzazz you get the feeling Barnes is still searching to explain who he really is and how he can relate to others. With each release we get closer and closer to the true patchwork montage that makes him human.

Of Montreal take the listener on an unbound journey into every corner of Barnes’ being, no matter how haywire or chaotic it may be. Once you are deep into Barnes’ world and you’ve been there for a while, you’ll begin to understand and decipher the various lyrical codes and musical shifts. Though to my ears Barnes could probably fart and it’d be an interesting rainbow of musical whiffery.

Basically,  if you haven’t already bought a ticket to ride Barnes’ latest rollercoaster, then you need to get onboard and get ready for a bumpy, exhilarating ride.

If you don’t want a ticket, well, prepare to be left on the side lines.

Glass Animals - How To Be A Human Being 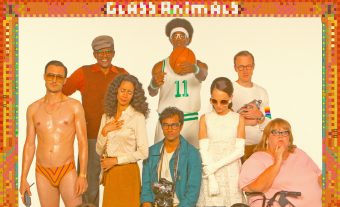 Glass Animals' new album is an episodic sonic drama, steeped in all the emotion, existential crises and societal sludge that humanity has to offer...
Read More