Unlike an actual bite from a real life child, a gummy toothless embrace more spit and impotent fury than damage, Child Bite happen to have a bit more ferocity spilling from their frothing gobs and a tad more point to their rotten gnashers.

Formed in 2005, Child Bite are a carnivalesque whirlwind of peculiar, angular noise-punk, with their latest album Negative Noise proving that if you get a bite from these disgusting over-sugared children then you might just become infected yourself. It’s in the spit you see.

Child Bite are a band that combine several musical elements and influences culled from the rich ranch of noise and hardcore, and successfully mangle them together to create something that is very much their own. A weird post-punk-hardcore-noise-sausage made from the tastiest cuts. MMM.

Though there are elements of bands like Black Flag and Jesus Lizard floating about the processed goo that makes up Child Bite, the strongest influence which bubbles to the surface during the stirring of Negative Noise, the Detroit band’s fourth full length, is that of Dead Kennedys. Which is no bad thing as Dead Kennedys are, and always will be, fucking immense. This similarity is, to be fair, mainly down to the fact that sole founding member and guitarist/front-man Shawn Knight’s histrionic, wobbly vocals are rather reminiscent to those of St. Jello Biafra himself.

So are Child Bite just a derivative patchwork band? An unpleasant, itchy blanket? The answer is no. They are very much their own band, warping the past to their own nefarious gain. Those willing to persevere through the crazed, barbed paranoia of their oddball music will welcome Negative Noise to their bosom without fear of the inevitable gum marks.

Negative Noise is a musically restless album, a discordant creep, feverishly scratching at the skirting boards of noise-punk weirdness, dropping sound-plops of aurally buzzing hooks and St. Vitus dance riffs that’ll rudely weasel into your brain gaff, raid the cupboards and eat all of your Rice Crispies, leaving only your posh couscous and a pack of out-of-date crackers. The twelve songs skitter about the ear with a frenetic dodgem logic, charging from one track to the next with wild abandon.

There are tracks that go straight for the throat, coming at you like a ferocious Jello-contaminated rat that’s been backed into a corner – ‘Death Before Dementia’ and ‘Born A Hog’ – and there are deceptively catchy chant-a-longs, that erupt in fist-in-the air shouting: ‘Paralytic Phantasm’ and ‘Euphoria Saturation Point’.

The second half of the album eases into a more sinister mode with ‘Beyond The Dirt’, a slower, bass-led track that oozes menace, and ‘The Great Ego Flood’, which starts with a contemplative twang before worming into an evil surf-rock bastard. The metallic ‘Into The Disease’ paves the way for the downbeat ‘Heretic Generation’, showing there’s more to Child Bite than just powerful punk pounders. ‘Heretic Generation’, with its eerie guitar howls, is one of the strongest tracks on the album.

Although Negative Noise may appear messy and frantic on first listen, after a few whirls the hooky vocal lines and jerky time signatures will lodge into your brain like a septic parasite. Soon you’ll be gruffly shouting the words to ‘Radio Blood’ like a drooling zombified stooge.

The album closer ‘Feed Me Sceptic Dreams’ is a great summation of the eleven tracks that have preceded it. It’s Child Bite at their most alluringly unhinged. Bass and drums hold the track together as jack-knifing guitars threaten to take the song apart with wilful abandon. Lovely stuff.

With all of its quirks and jittering rhythms, Negative Noise is an awkward, gangly child that lashes out at even the slightest sign of affection. But if you’re willing to take a few knees to the groin and gouges to the eye, you’ll find that it’s an album well worth the ball-ache and temporary blindness.

65daysofstatic - No Man's Sky: Music for an Infinite Universe 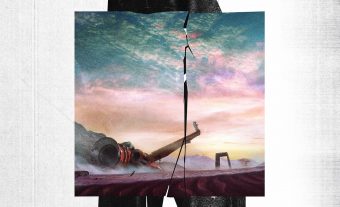 Post-rock titans 65daysofstatic attempt to augment the exploration of 18 quintillion explorable planets on the soundtrack to No Man's Sky...
Read More