The last time I saw Tom Jenkinson, a.k.a techno-jazz originator Squarepusher, it was at The Glade at Glastonbury 2004. At the time, one of the most highly-regarded platforms for electronic music worldwide, at one of the most influential festivals on earth.

And it was awful.

Glasto ‘04 wasn’t a remarkably muddy year, but it was muddy enough to make the experience an arduous, demoralising ordeal. The sticky brown (and not the good kind) steadily encapsulating our wellies would have been bearable if the music was capable of compensating. But the Glade’s preceding acts (assumedly less experienced and therefore overenthusiastic with the levels) blew out the speakers.

The crowd: wet, cold, crowded, confused, addled, and irritable. The sound: tinny, muted, dissatisfying, and difficult to differentiate from the cranky, wonky banter and occasional jeer of “TURN IT THE F**K UP” (the latter of which, admittedly, mostly came from me). Nobody was happy with how things went. Later that evening Aphex Twin, in a much-hyped “secret gig” at midnight on Saturday – apex time for Aphex Twin it would have seemed – was so infuriated by the sub-standard set-up, he threw a strop by dusting us with 15 minutes of random, arrhythmic grumpy glitch before walking off stage.

The last time I visited the Barbican (easily the best multi-genre arts centre in London, which is saying something), it was for the Royal Shakespeare Company’s production of Henry IV – both parts in one day. With one interval per play and a two-hour supper break, it totaled eight hours of boozy iambic pentameter and saucy Elizabethan prose. With the Barbican’s roomy seating, seamless sight lines, clean acoustics and the RSC’s high-budget production, the setting couldn’t have contrasted more starkly with a muddy copse of trees full of pillheads.

If somebody had told me 11 years ago, as I stood surrounded by hallucinating gurners in a soggy electro grove, that I would one day witness the same artist enthral fans in a plush London amphitheatre, I would have assumed he had left his chemical aids and frenetic beats behind him and moved on to embrace his jazz background. But Squarepusher stuck to his roots, enthralling us with the same frenetic noise and hyperactive basslines he made famous with albums like 1997’s Big Loada.

You could be forgiven for assuming the twain would (and should) never meet. One: thundering techno spawned in dirty warehouses and illegal parties. The other, a lush London auditorium designed to accommodate classical orchestras. The juxtaposition was hard to ignore. Especially when the other main-stage event that evening was ancient Greek tragedy Sophocles’ Antigone, starring Juliette Binoche. Witnessing the mixing of the two crowds – dreaded gothic ravers in platform shoes mingling with suited, spectacled thespies – was as much amusing as it was enlightening.

It just feels odd to hear music fostered in raves and not see a “DRUGS WILL NOT BE TOLERATED” sign sellotaped to the loo doors. Even odder: a techno set that finishes by 10:30pm, polished off with a post-show DJ set by Rob Da Bank in the foyer, ageing ravers pottering about.

Yet Squarepusher’s latest London show demonstrated that thrashing techno can be an easy fit for an orchestral chamber. Perhaps counter-intuitively, being violently assaulted with thundering bass can be extremely relaxing. Comfy cushions and anxiety-annihilating low frequency sound waves combine effortlessly when put together just right. Shows like this – which in fact the Barbican hosts on a frequent basis, from Aphex Twin to a recent Terry Riley homage featuring James Holden, Koreless and Luke Abbott – demonstrate that aggressive electronic music has earned its place in the pantheon of respected musical genres.

Which leads to the obvious question: does techno glitz in a symphonic hall seem suitable because we ourselves are aging? Too jaded for squat raves, too distracted by the nagging thoughts of the next day? Or does it fit because reverberating electronica was always a perfect fit for contemplative enjoyment devoid of chemical aids?

It’s easy to consider such questions from the vantage point of the audience. It must be far stranger and more difficult for a seasoned artist, accustomed to environments designed explicitly for dancing, to perform for rows of politely seated fans. When everyone sits quietly (with the exception of a few defiantly on their feet – probably to the great annoyance of those directly behind them), what feedback from the audience is there to spur you on? Without thumping fists and stumbling adorers bopping in front of the stage, it must be difficult to gauge the audience’s reaction and respond appropriately.

Another challenge: how can electronic musicians create their own indistinguishable, distinct sound? Singers are fortunate because they each naturally possess an individual, unmistakable combination of frequencies. Every human voice has a unique sonic fingerprint. Every one – from Aretha Franklin to Johnny Rotten to Plácido Domingo – is vocally unique.

Listening to Jenkinson feverishly clatter away, I thought: would I recognize this music as his? The answer is yes. Drawing heavily from new album Damogen Furies, out next week, the performance nonetheless showcased the same furious smothering of notes that he first developed twenty years ago. A talented bassist, he also treated us to the same masterful low-frequency shredding we know and love during an inspired encore of ‘Tetra-Sync’ from 2003’s Ultravisitor. With old-school drum and bass skips thrown in for good measure.

If Steve Reich’s quirky and repetitive opus can be titled ‘Music For 18 Musicians’, I am tempted to think of the entirety of Squarepusher’s works as ‘Music For Angry Barcodes’.

All in all, in ten words, my thoughts:

Assaultive noise can serve as a form of high art. 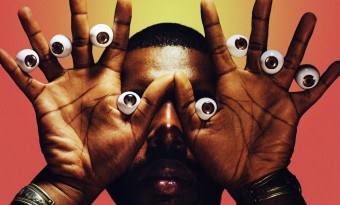 With DOOM, Lapalux, Kutmah and Shabazz Palaces appearing, the bill for Flying Lotus' forthcoming show at Brixton Academy is so good you'd be forgiven for thinking festival season had started early...
Read More