I came to the Deerhoof party very late. 20 years late to be exact, coming across them accidentally via an online documentary about their drummer Greg Saunier and Brian Chippendale (the drummer from Lightning Bolt). Mind suitably blown by Saunier’s drumming skills I investigated the interweb and found a full-length video of a Deerhoof show and was astounded. Serves me right for becoming obsessed with electronic music in the early nineties and writing guitar bands off completely. Still, it did give me a big back catalogue to investigate and enjoy.

I was feeling a little trepidation when this opportunity to review The Magic dropped in my lap because I wasn’t overly enamoured with La Isla Bonita, The ‘hoof’s last LP, and I wanted to fall in love with this new release as I’d already pre-ordered it on shiny white vinyl. Was this going to be a party worth returning to?

One of Deerhoof’s great attributes is their ability to assimilate whatever music styles take their fancy and make it sound like them, kind of like an alt-rock Borg. And so it is on The Magic. First listen through and I’m picking up a definite classic rock vibe. On ‘Learning to Apologise Effectively’ it sounds like Greg is channelling his inner John Bonham. ‘Plastic Thrills’ kicks off with a Stonesy riff before bouncing off on many tangents. Third track in, ‘That Aint No Life To Me’, the first curve ball is delivered. One of the chaps on vocal duties, this ditty is lo-fi punk with a Minor Threat kind of vibe. A slaying tune it is too. Raw.

Elsewhere there are some itchy P-funk type grooves. In fact this is quite a groove orientated album. The rhythms are both tough and lithe. On two occasions I’ve been roused to have a bit of a shuffle round the living room: ‘Model Behaviour’ being both funky as hell and otherworldly, ‘Little Hollywood’ a moody roller with a deadly techy machine groove. Elsewhere ‘Acceptance Speech’ almost sounds like an outtake from side 2 of Van Halen’s 1984 – high praise indeed. The lyric “we love to visit your towns” I find delightful – a touring anthem maybe? Final track ‘Nurse Me’ is probably the strangest moment on the LP; a bizarre off-kilter rhythm punctuated with wood block percussion (?), it’s also very funny.

Apparently the band rented out a disused office space in the New Mexico desert to make this record and it does have a party vibe, albeit the sort of party where someone has chucked a few tabs of Dr Hoffman’s finest into the punch and things have gone weird, but in a good way. It sounds like pretty much all the band contribute to the vocals, a real team effort. The well-spring of creativity is positively gushing and good times are being had. And luckily we have not only been invited to the party but we’re being made very welcome, Deerhoof being genial hosts.

If Deerhoof swing your way whilst touring this album, pop in and say hi – your head will be knocked clean off your shoulders, and you’ll be grinning as it happens. The Magic is indeed magic. White vinyl LP come to me! 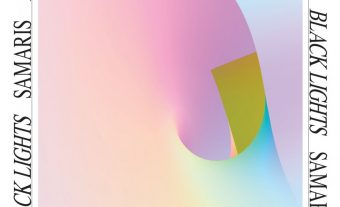 Even Cristiano Ronaldo would struggle to speak ill of staggering Icelandic trio Samaris. We listen through their classy new album track-by-track...
Read More