When the hippies proclaimed war on war in the sixties they had anticipated that love and peace would win and their Flower Power mantra would rule. The sixties as we know them only lasted for their demarcated decade and the summer of love, well, for one summer. By 1968 the hippie movement had shifted from free love and weed to weird sexual experiments, hard drugs and violence. Their realm of magic had suddenly become very dark. Children of the sun and flower movement like Janis Joplin, Jimi Hendrix and Jim Morrison sung of sorrow and pain. A few years later they were dead, war was raging and the hippies had retreated. The Sixties were over.

Not so for Florence Welch. In her long pink flowing dress, she is dancing bare-footed on a bright stage, flowers in hair and looking like she could have appeared straight out of the musical Hair. “Oh what a beautiful audience! What a magical night!” She talks of love and peace and sounds like her last acid-tab has catapulted her back into a time that only existed in some people’s dreams. She swirls and twirls about the stage as she opens with ‘What the Water Gave Me’. Her movements and voice promise salvation; only those who listen closely hear the meaning behind the powerful voice: “Lay me down / Let the only sound / Be the overflow / Pockets full of stones”.

Water is coming fast in her next song ‘Ship to Wreck’. It’s a dark display of a personal loss of control. Ten minutes into the performance and everybody is standing up and dancing. Florence’s acting skills are enough. No fancy gimmicks needed. The story tells itself. She sings, jumps, flits across the stage, a flickering silhouette. Half woman, half fairy, she shows an incredible command over her body. An ever floating stream of energy invites the fans to join in. ‘Rabbit Heart’ is only the fourth song and already a highlight. This time the “water turns from blue to red” and displays the apocalyptic image of rivers overflowing with blood. On stage she has become her own version of Alice in Wonderland. Tonight it seems she has taken the right pill.

In between the music, Florence speaks of alcohol escapades and painful mornings after. She tells us that many good songs have been written in the aftermath of a night gone bad. The drunken stories are hard to believe from this timid girl surrounded by light and glitter. Is that the same woman who sings about rough sex and prefers “a kiss with a fist”? But that is the point. Florence Welch cleverly juxtaposes the stage figure of the innocent girl with the troubled women of her songs – often dark and laden with violence.

Yet this realisation is somewhat lost on the audience. Every other girl’s head is wrapped in a wealth of flowers and the hippie and love generation seems to have returned for a night of reminiscing. In the middle of the audience we find a group of fans suspiciously well prepared for the evening. Not only have they brought oodles of flowers, but also dozens of peace flags, posters. With hands stretched out, they are beckoning Florence to come to them. And she does. 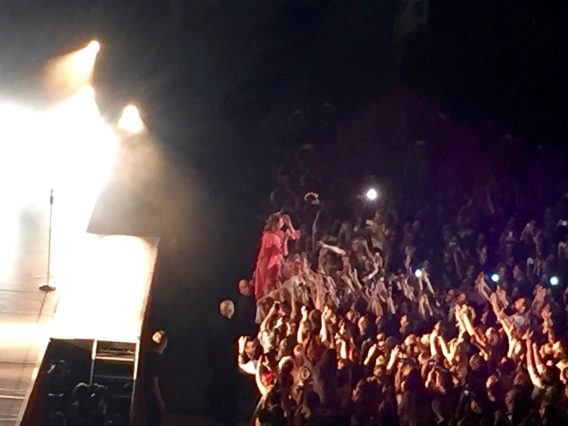 She starts singing ‘Queen of Peace’. The group raises their flags and flowers simultaneously, ready to throw themselves at her feet. Like an obedient priestess Florence follows and falls into their arms. Only a security guard makes sure she doesn’t disappear into the mass. Like in a minstrel stage play the group are like the messiah’s acolytes, Florence their willing saviour. With the spotlight coming from behind, she appears as an angelic shadow creature with glowing wings. It is all a bit too much. She asks the audience to provide the choir to her church. ‘Cosmic Love’ comes on.

Finally she invites us to shake off all those demons. An exorcism-like wild dance follows accompanied by the lyrics to ‘Shake It Out’: “And it’s hard to dance with a devil on your back / So shake him off”. In neither the cheap nor the expensive seats are people sitting still. ‘Delilah’ is loud and angry and tells a story of pain and violence. Fallen from grace. But unlike in mythology the fallen girl doesn’t stay in the pit but claws her way back up. Florence stops the music for a moment and goes on about the importance of love. “And now turn to your neighbours and hug them”. You can say and think what you like about Florence Welch and her slightly exaggerated stage persona, the woman puts on a hell of a show.

With ‘You’ve Got the Love’ she gets the audience really roaring. It is followed by ‘Dog Days are Over’ and everybody is singing, or shouting, along. By now even the back rows are on their feet. ‘What Kind of Man’ and ‘Drumming Song’ end the performance as encores and leave the audience energised and ready to go into the night. While the flower children start to embark on their journey home, I am left to wonder where the peace was to be found in all this force.

Here a strong woman sings about nothing other than the core of life, with sex, love, pain and the endless battles. The little girl on stage turns into a woman in the songs. The angelic figure lifting her arms towards the sky and beckoning people to dance is nothing but an image. An act. And a very good one at that. Off stage she flings herself at the audience, accepts flowers, t-shirts and rainbow flags. She is the altar the children of love pray to tonight. Let them.

Already the bluesman expressed his fight with the devil through his music and so did the rock gods of the Sixties. Flowers and fairy dress aside, the girl sings rock ’n’ roll.

Berghain - Where the Underground Meets the Tourist 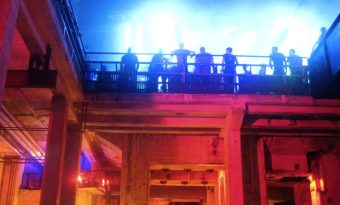