Dirty, grotesque, druggy, exclusive, queer, so hip it has become touristy and yet remains the coolest place in Berlin. Berghain is where the underground meets the tourist, the fetishist the everyday guy on the subway. Crammed with homosexuals, wannabes and people from all over the world, trying to conceal the joy of having gotten “in” in front of the solemn faces of the underground. “Look like you’re already on drugs”, our Airbnb host informs us and “don’t smile or wear colours – in fact just wear black”. Everything to avoid appearing like a sight-seer.

Berghain is still the hottest club in Berlin, if not Europe, with people standing in line all night just to get rejected at the door. Or so the Berghain myth goes. But we are lucky. After a mere forty minute wait we are in. The grim looking bouncer greets me with “don’t you say hello”. I stammer a confused “Hallo”, trying to repress a smile. He only growls “too late” into my face. Then winks me in. It all seems a bit too much of a show. Maybe it’s still early or it’s a slow night. Maybe the regulars simply aren’t into CTM festival. Or maybe it is all just a myth.

Inside the stale air of the underground mixes with raw techno and a hit of art flair. Downstairs a video installation by the art project Graw Böckler runs in a loop. Upstairs heavy bass announces a long night.

But even first-timers like us can tell that Berghain’s glory days are over. Drugs seem to be fairly rare compared to the regular Berlin club scene, where a dealer greets you at the bathroom door, promising to make your night-time dreams come true with just a line of almost anything. Maybe Berghain is just trying to make it hard for you again. “The raids are getting tougher“ a Spanish regular explains, “the cops come here a lot”. Maybe it isn’t that profitable after all to be mainly known for your drug culture.

With or without drugs, the music arouses feelings of dark joy and forbidden lures. On the small Berghain stage four men in long Arabian-looking garments and white-painted faces are mimicking tribesmen, dancing and drumming quickly to the techno beats. T’ien Lai is a Polish experimental band combining drone music with psychedelia and live percussion to put its audience in a state of trance. It is working. I am taken away into the world of music induced rituals and magic realism.

Next on stage are the Spanish trio Esplendor Geométrico. The beat becomes more aggressive and louder, the music darker. A cloud of industrial and house engulfs me. A band member, I don’t know which one, is sing-shouting loud noises into the microphone. Archaic. It is an unusual sound to be heard in Berghain and certainly one to get lost in. The performance ends and leaves me in a somewhat disoriented state. What time is it?

We stumble off the Berghain dancefloor and find our way upstairs towards Panorama Bar. At the top we are greeted by a boy and girl dressed up in leather gear. She is holding the leash leading to a collar around his neck. They remain the only resemblance of Berghain’s famous S&M scene tonight.

By now the club is packed and it is hard to get around. A moment of relaxation on the couches in a corner. People are casually chatting, smoking weed or making out. It is now 3am and Kassem Mosse, the main act of the night, is ready to come on. The dancefloor calls. Working on synths and keyboards, Kassem Mosse provides a mix of the finest underground house and techno. He gets the crowd roaring. By now I have stopped paying attention to details and just enjoy electrifying rhythms and a sense of blissful distortion.

The night continues with acid techno by Gesloten Cirkel. The beats have become quicker and drift off into semi-monotonous underground tech music. True Berghain style. I am no longer listening but rather experiencing, slowly dissolving into the night. Surrounded by rough beats and an indistinguishable crowd, the night wages on, slowly turning into morning. On the way out I have lost all sense of time. And so Berghain, along with its stories of drugs, excess and fetish sink into the mist of my dreams, ready to turn into another myth. 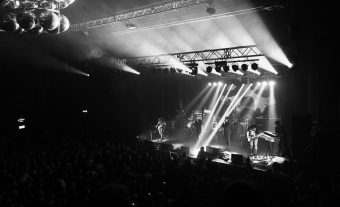 A full and diverse line-up joined hardcore veterans Converge for their special 'Blood Moon' show in Brixton, although some went down better than others...
Read More