Poptimism: it’s official, 2014 has had some f***king amazing songs.

A couple of months ago a couple of places started getting a bit philosophical about the rise of ‘pop’ music (not certain how it’s risen just now, seeing as Elvis happened when my Gran was in her teens). Anyway, The New York Times essentially argued that liking pop music was the equivalent to not liking real music or being critical of anything, while Noisey managed a pretty substantial argument (I know! I was surprised as well) against that train of thought.

Pop music is, ultimately, just stuff that’s popular, but it’s also taken on a slightly different meaning to Generation Y: stuff that could be popular. If it’s not covered in beards and it’s not in blazers, and it has a chorus you can remember, then that’s pretty much pop too. I can take my muso bands as much as the next music writer, but despite what the NYT says, I can also like some pop music and be critical of music as a whole – Saul Austerlitz reads like the kind of man who rolls his eyes when someone says ‘Oh, I like all sorts of music’, the kind of opinion that died as soon as Hadouken! (who? – Ed) managed to make a joke of it.

The likes of Robin Thicke are undoubtedly pop music in the purest sense, but he’s also still vile. Not criticising him isn’t a problem with the rise of pop music, it’s a problem with the writer and the industry which spawned him. Pharrell has re-made a career ripping off Marvin Gaye’s I Heard it Through the Grapevine album (the best pop album of all time, I’m confident in saying) and making it ‘wine bar shit’. The powerhouse that is Jay Z is, to me, a self-interested hypocrite whether it’s his financial politics or otherwise. And for all the fuss made about her, Beyonce’s last album was a bit, y’know, dull.

What both articles failed to link to was some actual music. At the end of the day the only reason the word ‘pop’ has got so much attention recently is because there’s been some great pop music out recently, and if the song’s that good, who cares what genre you can put it in? Without further ado, here’s some music from this half of 2014 that’s made the world a brighter place – God knows we need it.

Juce – Call You Out
If there’s no dance routine, you’re doing it wrong.
FEMME – Heartbeat
The best pop has attitude.
Jagwar Ma – Uncertainty
Sometimes it’s a bit epic.
Chela – ZERO and La Roux – Let Me Down Gently
Sometimes it can seem a bit retro pastiche, before you realise it won’t leave your head and they’ve tricked you with the flashing synths.
St Vincent – Birth In Reverse (Live)
It can be a spectacle.
Metronomy – I’m Aquarius
Other times it can be a bit sad.
Fat White Family – Touch The Leather
It can be about (we’re all pretty certain here) anal sex.
Iggy Azalea – Fancy ft. Charli XCX
And lastly, it can be just a traditional old ear worm which means diddly squat apart from how fancy you are/could be if you ever transformed into Iggy Azalea. Poptimism: for people that like a good song. 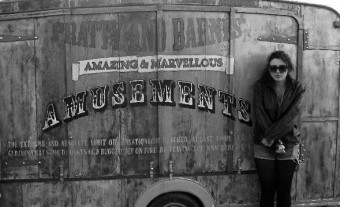 Escaped Alsations, under-age boozers, and burnt-out caravans being dragged into a field by a farmer called Pratty - it's the latest chapter in the continuing journey of Dooks...
Read More