One of the most tired slurs slung at electronic artists is that they’re ‘not real musicians’. I’d love to see someone try that insult out on William ‘Memotone‘ Yates; the man has mastered a dozen instruments and has form for whipping out a clarinet mid-set. Put simply, he’s annoyingly talented.

Still, while being very good at playing multiple instruments is enviable, it doesn’t necessarily make you any more likely to produce a good album. Fortunately, on Memotone’s Chime Hours, Yates uses the many strings to his bow (a bow he can probably use to play another dozen instruments, the bastard) to subtly enhance his self-expression. Like the saxophone-playing Anenon on his recent Petrol album, live instrumentation is generally used to add nuance to already impressive tracks, rather than ‘look what I can do!’ ornamentation.

It also makes Chime Hours a deeply strange album at times. To be fair to Memotone, he gives the listener plenty of warning, opening with some solo piano that shifts back-and-forth from melancholy, questioning phrases to sudden avant-garde breakdowns. When the beat, teased throughout, finally kicks in after a couple of minutes, it’s similarly wavering, with subtle variations of pitch and the occasional dropped beat contributing to the growing unease.

As buzzing drones start to hone in, it feels like the music is circling you, prodding at your sensitive parts, looking for weaknesses. The stand-off comes to an uneasy close with the first words on the album: “We stared at one another / Across ancient history”.

From thereon Chime Hours spars with the listener, punctuating the deep, inky production with sudden bursts of noise and activity. ‘Your Eyes My Teeth’ is a polished yet tense piece of gothic electro, as shadowy as the first Emika and ERAAS albums but with even creepier vocals, mutilated by several effects. It’s a bit like when someone puts so much effort into their Halloween costume that you double-take to make sure they haven’t actually got a knife embedded in their temple.

The tin-whistle folk dance intro to ‘Poison Arrow’ makes for an amusingly unexpected shift in tone, although obviously it’s only a matter of time before high-pitched feedback and juddering techno take over, before it all gets crushed into silence. Even gentler tracks like ‘She’s A Killer’ hang like mist on a deserted building site, with industrial field recordings in the distance and electronic throbs rumbling up from underfoot.

‘You Saw The Future’ is more reminiscent of the widescreen sounds of Murcof, with electronic interference and some slightly scratchy cello adding a satisfying edge to what might otherwise feel like overly sentimental piano. The hypnotic percussion on ‘Ritual’ also seems on the verge of turning sour, like a drum circle that’s accidentally become a demonic invocation (I hate it when that happens).

Sometimes Memotone goes a bit overboard on the spookiness. ‘All Collapsed’ could be something off a Thom Yorke solo record (Yates’ vocals are used sparingly but effectively throughout) until some overdriven guitars spear it out of nowhere, like the Prodigy have just crashed your massage session. Similarly, ‘Bird Eating Spider’ lacks the restraint that makes the rest of the record feel truly ominous – it’s like that bloke who scuttles around in the ghost train wearing a hooded robe and cheap zombie mask.

Chime Hours ends on a Wicker Man style high though, the low woodwind mournfulness of ‘Abbots Bromley Horn Dance’ dovetailing nicely with folk field recordings, while background mutterings give the track an alienating vibe. It’s not the most inventive use of this particular slice of traditional music (Willie Isz’s bizarre rap take on the same piece takes that prize), but it provides the perfect close to Memotone’s atmospheric opus – while the danger has passed, a sense of dread remains. 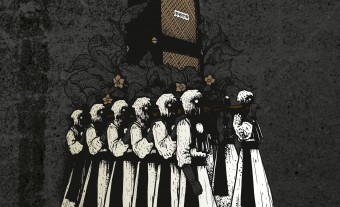 The guttural new album by Mannheim miscreants Black Shape Of Nexus is a violent game of cat and mouse for both band and listener...
Read More