Formed from a bubbling cess pool during 2007, the sextet known as Black Shape Of Nexus are a fantastically hefty bunch of sods, ploughing a deep furrow of doom, sludge and drone heaviness. They mix the traditional elements of these genres with a bleak and manic use of industrial electronics and vocal effects that rudely handcuff the listener and escorts them to the nearest alley for a bit of a kicking.

With their new album Carrier they‘ve brought along the dogs and truncheons for an even nastier ride. It’s like reading Judge Dredd while you’re smashed off your chops on cheap own-brand whiskey.

Big-arsed, down-tuned doom dipper ‘I Can’t Play It’ opens Carrier in crushing fashion before diverting on a surprising and pleasantly jaunty guitar interlude. The only reminder of what proceeded and what will come next is the distant sound of distorted growls chasing down the melody before forcing it to its knees. Well, it doesn’t have knees because it’s a musical concept but you get the idea. If you don’t get this idea, you really need to try harder.

An ominous drone sets a dark tone for ‘Lift Yourself’ and pounding alarm-like synths whir out a sci-fi warning. Then a truly fucking dirty bassline shoves the atmospherics face-first into a hard thrash puddle. “Lift yourself,” hollers vocalist Malte Seidel as though his thumbs depended on it. The guitars rumble like chainsaws, gnawing at old brittle bone with enticing fury. Black Shape Of Nexus go hard at your vulnerable mush. During Carrier they are the law. Judge, jury and executioner; and man they want to break your face.

The excellently titled ‘Facepunch Transport Layer’ (try saying that after a few whiskeys) features a ridiculously evil riff that even Slayer would be proud of. This isn’t your average generic thrash bash though. Triumphant, chugging guitar leads to a guttural roar, which constitutes a chorus of sorts, giving way to some truly odd industrial bubbling and burping as bizarre vocals and lyrics are farted out through a think layer of oil-slick spillage distortion.

‘Sachsenheim’ is another of Carrier’s big hitters; a punky-Sabbath riff encases black metal vocals in a gloopy armour of fuck-treacle. Then suddenly everything stops; there’s the sound of a drink being poured, probably more of that own-brand whiskey. Gibbering laughter and manic chatter begins to crowd into the track through the suffocating fog. The vocals become roared bellows and the backing vocals higher, as if pleading with a malign force. The track fades out along with all chance of escape.

After completing the recording of the album vocalist Malte Seidel commented, “Carrier is the result of a band being in a constant state of deterioration. Doing a record is a very unpleasant and harmful process for us.” Carrier is, in that case, a violent game of cat and mouse for both band and listener.

As Black Shape Of Nexus chase the listener into dark and savage spaces, you realise that they must have traversed the same unpleasant paths themselves. But at least they put up some lights to make the place more pleasant for us. Ultimately though both parties will come away from the chase equally rewarded and happy that they ran in the first place.

Well if ‘happy’ is the right word.

The Body – No One Deserves Happiness 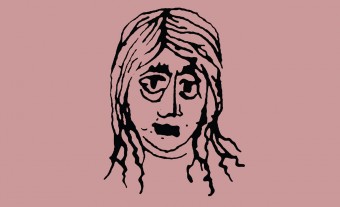 Conceived as "the grossest pop album of all time”, The Body's 5th album incorporates everything from Édouard Levé to Beyoncé in its industrial melodrama...
Read More