Music, art and technology extravaganza Convergence returns to London next month, and seems certain to put a spring in our steps as winter fades into bitter memory. Featuring perhaps its strongest and most eclectic line-up to date, alongside a host of fascinating talks over its ten-day stretch, Convergence is set to utterly dominate the diaries of all self-respecting music fans during its duration. Check out our review of last year’s event for a taste of what it’s all about.

One of the stand-out events this year (which is saying something) has to be Omar Souleyman’s return to London on March 18th. The Syrian superstar’s KOKO show is certain to be an electric affair, not least thanks to the presence of Monitors favourite Clap! Clap! on the bill – the Black Acre beat-maker’s quick-fire rhythms and tribal field recordings are guaranteed to get pulses racing. Opening the bill are fellow Italians Simbiosi, who released a distractingly adventurous box set via Actress’ Werkdiscs label last year.

All told it’s going to be a hell of a night, and YOU can win tickets to be there. Simply send us an email marked CONVERGENCE COMP to info@the-monitors.com with your name and contact details, and we’ll select a winner on Monday 14th March (see bottom of page for full terms and conditions). If you’re not lucky enough to win then fear not, as tickets are available to buy here, while Boiler Room will also be streaming the whole bloody thing here. Nice.

As for the rest of this year’s Convergence, well, you’re spoilt for choice frankly. You can take a look at the full line-up here, but for what it’s worth we’d particularly recommend catching Colin Stetson’s solo show at Scala, Anna van Hausswolf’s organ-tickling appearance at St John on Bethnal Green, and a rare Nurse With Wound performance at Village Underground. The Dave-Okumu-curated Gil Scott-Heron tribute at Roundhouse also looks essential, while we’re also keen to see of Montreal after last year’s sterling Aureate Gloom album, and the debut UK performance of Jonny Greenwood and Shye Ben Tzur‘s Junun. To be honest, you could stick a pin in the Convergence bill and know it’d land on a winner.

As for the Convergence Sessions – a series of talks running alongside the music programme – well, it boasts a similar spread of riches. Having interviewed Dan Deacon a couple of times I know for certain that his conversation with Mary Anne Hobbes will be fascinating, while The Gaslamp Killer showed himself to be a similarly engaging interviewee when he popped up on Open Mike Eagle’s Secret Skin recently. With talks on everything from streaming data analysis to sound art, the sessions offer a chance to engage your mind during the day before you engage your feet in the evening.

Explore the full web of events at Convergence here, and we’ll see you down the front for Omar Souleyman…

Competition terms and conditions: Entrants must be over 18 years of age. Prize is one pair of tickets to Omar Souleyman, Clap! Clap! and Simbiosi at KOKO on March 16th. Transport expenses are not included and no alternative prize is available. By entering you are giving your permission to be added to The Monitors mailing list, from which you are free to unsubscribe at any point (although you probably won’t because our emails are great). The winner will be drawn and announced on March 14th. Thanks for entering. 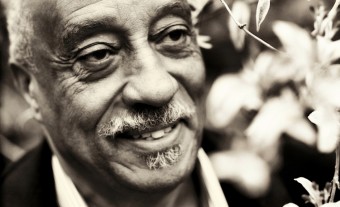 The father of Ethio-Jazz shows he still has a few tricks up his sleeve during a mesmerising set at Roundhouse - not least an unexpected grime interlude...
Read More