In the latest episode of his worthy crusade to only review albums after he’s had sufficient time to live with them, Jake Smith takes on last September’s storming Windhand album, Grief’s Infernal Flower…

I was a weird kid. I have fond memories of visiting Moseley Road swimming baths as a pre-teen and sitting in the changing cubicles – they ringed the perimeter of the pool, Victorian public bath stylee – listening to the reverberating sounds after I’d dried off. My folks would have to come and get me as I’d spend so long doing this. I found the sounds comforting and reverie-inducing.

I got similar feelings from listening to the droning sounds of household appliances – washing machine on spin, vacuum cleaner, kettle boiling. A big part of my musical journey has been hunting down sounds that perform this same function. A trip to Desertfest a few years back rekindled my interest in the guitar as a generator of these sought-after frequencies, the metal sub-genre doom being an exemplar of delivering the goods.

Doom is a pretty easy sound to create. Massive riffs on drop-tuned guitars cranked to max volume through valve amps, slow head-nodding tempos, preferably a groove with some swing. Early Sabbath is the holy template by which all others follow. Windhand have all these elements down pat – what sets them apart from all the other bands in the doom camp (it’s a pretty big camp these days with the likes of Sunn 0))) and Electric Wizard being picked up by hipsters and Guardian readers alike) is the vocals. Not only are the vocals melodic and non-cookie monsteresque, they are female.

This is the beauty of the latest Windhand album, Grief’s Infernal Flower; the feminising of a very male genre. The vocals effortlessly glide – like wind – over the savage yet comforting roar of the monolithic wall of warm, glowing valve amplification. The guitars sound truly immense, a lot of care has been taken on creating the right tone here and the recording is crystalline. The riffs have enough twists and turns to hold interest and the groove gets my head nodding. But it’s the vocals that provide counterpoint and emotion beyond the roar, melancholy at odds with the defiance of the rest of the music.

The album begins with ‘Two Urns’ and what sounds like a field recording of a camp fire. The riff enters, builds and boom, we’re off, template set for the whole album. Catchy, almost poppy melodies from the vocals whilst the rest of the band provide rock that would sound tasty in a stadium or better still a canyon, desert, quarry. Elemental. I’m back in that changing cubicle drifting off to a good space.

To alleviate the bludgeoning, flattening effect of an endless wall of sound, there are two acoustic tracks positioned in the middle and at the end of the album – ‘Sparrow’ and ‘Aition’. The contrast is welcome, without this I’d be experiencing the sonic equivalent of snow blindness. ‘Hesperus’ clocking in at 14 minutes overstays its welcome for me. Maybe a hit from the doom bong would have helped? Being a clean-living chap I wouldn’t know.

‘Kingfisher’ also clocks in at a massive 14 minutes but dubs/psyches out a bit at the end so kind of gets away with it. I think my inner punk starts getting concerned if a track drifts too far over 2-3 minutes though clearly this is not the doom way. The rest of the album is reasonably concise by doom standards, and better for it. Make every minute count or ditch it would be my mantra if I was wearing the producer’s hat.

I’d like to see more female infiltration in music in general but especially the traditionally male-dominated areas – there’s a whole universe of new expression waiting to open up and happen. I for one will be lapping it up. In the meantime Windhand give their own twist on a well worn genre and come up with something rather special. I hope they come to these shores soon and give my tinnitus-wrecked ears a good rinse. 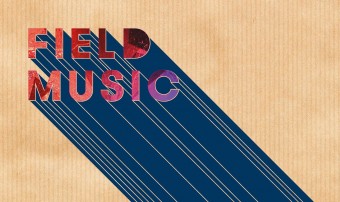 The funky odd-pop of Field Music's fifth album proper may be lyrically concerned with the mundane minutiae of parenthood, but it'll still get you dancing...
Read More