Apparently the two bands have been discussing releasing summat together since the good old halcyon days of sunny 2006 (remember 2006? I don’t, but they were probably good right?) They finally met in grisly old 2014 when they performed a few gigs together, including Desertfest and a show in Bristol with the mighty Årabrot and The Body.

Having met, and presumably liked each other enough, they decided to do some recording. The end result is one mean bastard of a record, with the two bands providing very different and yet oddly complementary styles on each side of a piece of vinyl wax.

The Hotel Wrecking City Traders side of the split is one long, spaced-out jam session titled ‘Droned and Disowned’. It’s 27-minutes of instrumental, big-hair-in-the-desert-wind, guitar goodness, perfect for sticking on the record player and putting your feet up to.

It’s also very good if you’re a fan of air drumming to music that you aren’t literally playing whilst having no drumming equipment to hand. I’m not doing that, but I thought I’d mention this as I’m good like that and it takes all sorts don’t it. The drumming here is excellent either way you choose to enjoy it.

Conversely, Hey Colossus offer up the 10-minute comedown epic ‘Heaven Blows’. If you’ve ever been out on the piss and, after one too many shandies, had the inevitable next-day hangover kick in well before your sozzled bonce has hit soft pillow, then you will have been close to the experience that ‘Heaven Blows’ elicits.

It’s a droning, regretful little number that sees Hey Colossus at their textured, experimental best. The instruments and occasional woozy vocals slosh about in your head like a dream about an angry pig in a washing machine.

So it’s quite obviously brilliant and required listening then. Have one flung over from Melbourne via Wild Animals Records, or grab one from Hey Colossus themselves when they play live. You won’t regret it.

Get it on and play it loud. I feel a hangover coming on already.

Mac DeMarco offers us 'Another One'... 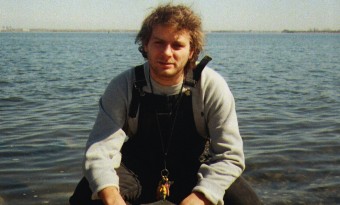 The church of Mac DeMarco recently converted yet another former non-believer, but will the occasionally self-pitying air of 'Another One' test that faith?
Read More