Rejoice, rejoice; It’s the end of the world!

The apocalypse has arrived, the Sun has crashed into the Earth and all has been turned to dust. Nothing now exists but desolate wasteland, unforgiving desert and those weird bits of fluff that collect behind the fridge and are really hard to shift.

Comprising of five blazingly burnt-out tracks (you also get two bonus tracks – ‘The Immutable Path’ and ‘Outro’ – thrown in for good measure) this album is the sound of a raging comet shower. Insane astronomic bullets triumphantly raining a destructive path of flaming debris, crashing through the sky and landing on the farmhouse roof of some poor unsuspecting git as he delicately milks his goat, crushing them both in a pleasing splat, causing a seismic wave of ruin. The poor goat had no chance.

Pour the molten hot opener ‘Lava’ deep down into your waxy eardrum and it’ll righteously burn away your sinuses and make your face melt off. This acrid rock-goo will then trickle down into your body, and create a scene of physical abjection more harrowing than Christopher Lloyd’s body melt at the end of Who Framed Roger Rabbit (sorry if you haven’t seen it but fuck you). It’s a short burst of metal excellence and proves a perfect appetiser for the longer songs to follow.

‘Empires of Dust’ is as mournful as ‘Lava’ is heavy. Surveying the wreckage of melted cartoon judges and a smashed up goat, it’s the reflective sound of someone taking stock of the loss. The poor goat never saw it coming. The song begins with ghostly atmospherics before the slow as treacle sludge drips down, tarnishing everything in sight. It’s filled with the sad regret of accidentally treading on a slug, Tad’s deep voice bubbling up like a regretful Vigo the Carpathian.

‘Unnamed is savage’. Right ruddy savage. It’s pure head-banging as thunderous metal pelts you from all angles. Gentle finger-picked foreboding caves into thrash as the walls fall in with a reverb crush. “I am unnamed,” warns Tad, before blurting headlong into a straight-up thrash riff, his voice turning to black-metal croaking through thick layers of tar. It’s like rocking out with the four horsemen. War’s a right laugh when he’s had a few.

‘La Mano Poderosa’ (or ‘the powerful hand’, I bloody googled it yeah) is an 11-minute behemoth. Punky riffs and Tad’s throaty bellow all add up to a slow and pounding gut-punch. Five minutes in, it all gets a bit aggro as anxious power rock riffing turns into wailing guitar, which slides off the face of the Earth and into the darkness. We then return to the gut-punching. Lovely gut-punching.

The songs shift pace and tone quicker than the dripping flesh of an eviscerated goat. Poor goat never saw it coming. Well it’s a goat innit.

‘I Am’ is filled with creeping dread; maybe he did see the end coming, poor bastard. Maybe he just let the melty, sticky volcano juice run down his bubbling searing flesh and welcomed the physical corruption that it brought with it. You should too. Simply put, Brothers of the Sonic Cloth is fucking class.

So rejoice, it’s the end of the world! Now stick this on your Walkman and let’s have another go at getting that fluff out from behind the fridge. 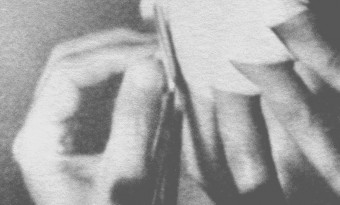 It’s dark, it’s gloomy, it's filled with panic... it's the debut album from Calgary's Viet Cong. But is it possible to penetrate the record's icy exterior?
Read More