This week’s singles round-up concludes with an extended rant about the video for Sophia Grace’s viral hit ‘Best Friends’, but as 2015 gets into gear there’s plenty of new music to get through first…

Astronauts – In My Direction

‘In My Direction’ is a melancholic collection of acoustic guitar loops and scratchy percussion, flattered by pretty keys and a soft, warm male vocal; sort of like an Aussie José González [except not Australian (and with an ace video) – Ed]. A light Sunday afternoon track which does its thing in the best way possible.

One for the Ocean and Drake fans, ‘About You’ finds poor, heartbroken Melrose mourning his way through the embers of a relationship in an inverted hip-hop repost to ‘You’re So Vain’. The grinding industrial beat, especially ear-catching around the breakdowns, is the real hook here though.

Writing a song about geese who have potentially been stranded on the moon is probably one of the more entertaining concepts we’ve heard, and makes me feel the need to coin ‘Sci-Fi Punk’ or some such phrase. ‘Moongee’ is a tight, reverb-heavy track with a dash of shoegaze exploration. While the first half is a little forgettable, the psych finale makes me want to get my hippy lighting rig out…

Made Violent – On My Own

Like the Strokes? Winner! Like scuffing your Converse up? Winner! If you’re not sixteen, ‘On My Own’ will seem early Kings of Leon predictable. It’s retrograde, but they score points on sounding like they mean it.

The lead track from South East London’s latest offspring is a minimal but engrossing affair. Built from a single loop, which is then edited, reverberated, and generally twisted into a spiralling dream sequence, ‘SKTCH’ reveals itself in a butterfly-like manner, breaking through its own restrictions before flying into a warm abyss.

If ‘Poison’ wasn’t produced under a barrage of DIY aesthetic, it’d be one of the best pop tunes on this list. Like a forgotten Edwyn Collins single, it bounces along with a spring in its step and a backwardly optimistic chorus while the singer announces “we’ll turn that poison into honey…”

France is producing good music like nobody’s business at the moment, from the electro-pop of Polo & Pan to the fusion electronica of Chapelier Fou. Petite Meller is their attempt at a quirky pop star, and for the most part ‘Baby Love’ works. The verses bounce with an ease that is hard to resist, and the Paul Simon on heat bridge is waiting for an extended edit – it’s only the Eurotrash chorus which lets it down. Saying that, I’ve put it on repeat five times now so who am I kidding? [Minus points for desperately trying (and failing) to channel Yolandi Vi$$er in the video – Ed.]

Maybe it’s a personal thing, but I think the wavey shoegaze thing is done now, everyone. The exciting bands are adding a bit of grit to proceedings at the moment, while ‘Waves’ just contains no punches.

Yours – A Wish for a Crash

Can’t quite believe we’re at a stage now when bands are citing Deptford Goth as an influence. It’s surprising then that ‘A Wish for a Crash’ actually sounds a little bit more long-sighted than that, with echoes of The Human League peeking through the electro sheen.

‘Whoever’ is a knuckle-cracking debut track, and showcases a bolshy, chorus-orientated approach to noise rock. The singer repeatedly asks “Whoever really knows?” around a series of rhetorical questions (“Is there a different place, where the same things happen?”) and a cacophony of gut-feeling feedback, all underpinned with a beefy bass riff.

Granted, I’m a couple of weeks late on this, but ‘Best Friends’ is a peculiar thing. Actually, it’s not that peculiar. Which is sort of its problem.

The Essex-based Sophia Grace made her name appearing on the Ellen DeGeneres show doing a rendition of Nicki Minaj’s ‘Super Bass’. Fast forward to January 2015 and she has a single out. The song is a Girl Power, teenie-pop affair reminiscent of the Spice Girls but, as everyone’s pointed out, with a DJ Mustard beat underneath it. It’s amazing then that they’ve taken a song which contains such pure-of-heart lyrics (sample: “You’re my best friend forever / Cross my heart and hope to die / You ain’t got to worry never / You’re my best friend for life!”), and made a video which is so uncomfortable to watch.

The video alludes to a ‘Girls Just Wanna Have Fun’ sort of frivolity. What the video actually ends up saying is: make sure you get bought lots of toys and aspire to be the centre of attention. It’s like an advert for Toys R Us and X Factor all at once. Although it’s actually an advert for Beats and K Mart (both names are heavily branded in the clip).

The song is playful fun, re-imagining kids as adults in a track with a strong female empowerment message. But the video is ‘aspirational television’ at its core. It’s not taking the mick out of the adult world Sophia Grace now finds herself in, it’s telling her to bow down to it. It’s also telling a young audience to bow down to it too.

And this video will get watched. Her fame was born from YouTube uploads, and it will continue that way. I don’t know how much say she had in the video, but based on how much say other artists generally get in videos, I’d hazard a guess that it’s next to nothing. And even if it was her idea, someone should have said, “you know what, there’s more to life than buying stuff.”

Why couldn’t they do a video about friends being friends? In a world where pop stars and their music are becoming more self-aware than ever, Taylor Swift being a fine example, it seems any sense of innocence has been lost, even when a generation of primary school kids need to be taken into consideration as well. Team Lorde managed to make a video for ‘Royals’ which inoffensively depicted the suburban characters she was singing about, so what happened here?

I’ve had experience of bringing corporate money to musicians to help them fund a video/tour, or get them a new pair of shoes because they’re not earning enough through their art to actually buy a pair. I’d hope though that these things come into play once the artist has developed, as a musician and a person – and that their audience has as well. Quite simply, until making music pays, there will always be an element of sponsorship as long as musicians and labels want to survive.

Sophia Grace could’ve joined a heritage of power pop with a subversive edge, but adults have turned an eleven-year-old into an advertisement. Next time the label and marketing team might do well to come across less like pushy parents, and allow the visuals to mean as much as the song obviously has for so many people. 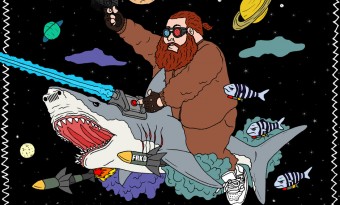