It’s the last singles column of the year and it’s a (Christmas) cracker, featuring everyone from Little Shalimar to little Willow Smith…

You may think you’re having a shit Christmas but spare a thought for South London’s Benjamin AD, who according to ‘Mandatory Mantra’ has lost his job, his family, and his central heating. Poor bugger. “Gotta get rid of those demons” is the mantra of the title, relayed over submerged bass and misty horn samples, but if the demons are helping him produce tracks like this then maybe one or two should be allowed to stay. Kier Wiater Carnihan

This would sound better with an MC on top. As it is, ‘Rolex’ os a perfectly fine piece of wobbly grime, if a little basic on the production side of things. Nicholas Burman

I’m currently compiling The Monitors’ ‘best of 2015’ lists, so it’s nice to hear from someone who featured heavily in last year’s. ‘Exit 353’ isn’t as strong a song as many of the offerings on Damien Jurado’s last album but it possesses that same breezy sense of freedom, meaning hopes remain high for the follow-up. KWC

US slow jams meet the London lexicon. While the verses are passable, the hook will sound nice in a pre-drinking environment. NB

A match-up that promises a lot and delivers even more. Tastefully skewed production and a typically assured Katy B vocal are spiced up by strings that smoothly switch from sweet to prickly. Tasty. KWC

My interest was piqued by Kelly Lee Owens’ support performance at Ghost Culture’s recent Corsica Studios gig, and this is getting me even more excited. It takes a brave woman to take on an Aaliyah track, but KLO does so with aplomb here, bolstered by impeccable synths and a spectral vocal. KWC

This is a track taken from the soundtrack to Rubble Kings, which is an essential documentary for anyone interested in either hip-hop history or community spirit. The soundtrack is out in the New Year via Nas’ Mass Appeal records. Little Shalimar doesn’t wallow in crude old-school aping; though this track feeds off a traditional beat, the psych vocals and atmospheric synths make ‘Phoenix’ as colourful as the mythical animal it name-checks. NB

And here’s something which sounds like it could have been lifted from the Rubble Kings documentary. While the beat does little to associate itself with current production trends, the flow is entertaining, one highlight being: “I’m so dope I could get this heroin pregnant.” NB

In fairness to Willow Smith, she could’ve turned up at a label and gone, “I’m Will Smith’s daughter, can you give me a career please?” at which point we would’ve been subjected to celebrity culture masquerading as art. Luckily, ‘F Q-C #8’ demonstrates that while she’s not totally in control of the experimental aspects of her brand of pop, there are more ideas here than a lot of budding popsters would bother to think of. NB

Taking inspiration from a Frida Kahlo quote (“I drank to drown my sorrows, but the damned things learned how to swim”) and snatches of Miles Davis’ ‘Nardis’, Antipodean artist Wallace has managed to produce an intriguing neo-soul study of alcohol abuse. Much better than all those ‘drink responsibly’ ads, that’s for sure. KWC

You Are Number Six – From The North To The South

It’s been an unseasonably warm winter in London so far, but You Are Number Six take the temperature down several notches with a chilly slice of sci-fi electro-pop. The track has a bit of fat on it (probably to survive the sub-zero conditions), but a strong chorus saves the day. KWC

Alizzz’s hyper-pop hit ‘Your Love’ gets a chic remix courtesy of Manila Killa. Tempering the original’s energy by taking down the tempo and adding some unexpectedly pretty piano flourishes, this is an adroit bit of electro-surgery. KWC

Wierdo, percussive post-punk two-piece Za! are essential for anyone who likes the jaunty rhythms of Battles or frenetic melodies of Melt Yourself Down. NB 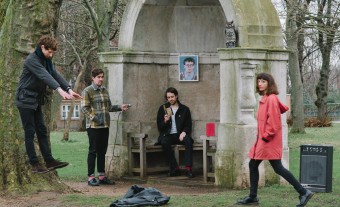 New tracks by Teleman, Fews, Miss Red and Sauna Youth help anaesthetise us against the sad news that Power Lunches is the latest London venue to close...
Read More