First of all, if you’ve never been to the Every Noise At Once website, then do so at once. A ludicrously extensive attempt to document every musical genre in existence, it’s on a doomed yet commendable mission to differentiate between styles that, to the untrained ear, may be all but identical.

The genus of heavy metal probably boasts as many distinct offspring as any other, as anyone who’s wiled away an hour or two browsing the Encyclopaedia Metallum will be able to confirm. Every Noise At Once demonstrates this with a gloriously exotic list of metal-related sub-species. So many in fact that most bands struggle to be contained in just one.

Sheffield’s Air Force Chron are reasonably easy to locate on the Every Noise At Once map – you’ll find their natural territory about halfway down the page, somewhere in between ‘necrogrind’ and ‘black sludge’. There’s a clue in their name. There’s a clue in the title of their debut record’s opening track. And there’s an immediate clue within five seconds of pressing play, when the band proudly proclaim themselves ‘the crusaders of the leaf’.*

Yes, this hirsute duo make a strong claim to be considered a neotype of the Stoner genre. Whether that’s Stoner Rock, Metal or Doom I’ll leave the band to decide, but this is definitely Stoner with a capital ‘S’ – an ‘S’ formed of several stuck-together rizlas and blazed until the bleary-eyed dawn. This is a band ready to riff you back to a stoned age so convincing that a dyslexic woolly mammoth would probably try and set up home there, and we’re proud to spark up Air Force Chron’s Minimum Effort / Maximum Volume EP for Monitors readers to exclusively enjoy this evening.

‘Knights Hemplar’ sets out Air Force Chron’s stall early on, and it’s a stall covered in novelty lighters, home-made bongs and Big Muff effects pedals. The riff is warm, heavy and potent, likely to induce both a feeling of mind-fizzing contentment and a lot of slow, rhythmic head movements. The even more ridiculously named ‘Weed Babes (420 BC)’ slows the pace to a delicious ooze, with a repeated bass note thudding against your head until you submit to its narcotic charms.

The monolithic, ten-minute ‘Necrochronibong’ is the most mind-expanding substance in Air Force Chron’s arsenal. Entering with a rippling, repetitive bass interval, it confidently moves from heavy-lidded bliss to glorious, mountain-demolishing rock heroism. Don’t let Theresa May hear this, or she’ll have Air Force Chron upgraded to Class A controlled matter in an instant.

Instead, as the last distorted drones burn out in the ashtray, call your friendly local (record) dealer – Tye Die Tapes offshoot CRTN DTH – and register your order of Minimum Effort / Maximum Volume today…

*That’ll be the sweet leaf Black Sabbath sang about in 1971, in case you’re concerned that Air Force Chron are some sort of horticultural militants.

Premiere: Ephemerals - Get Out 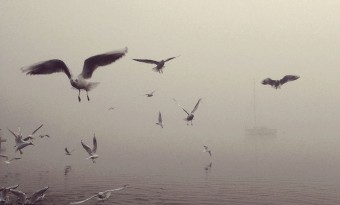 Ephemerals recently released the finest soul album of the year, and we're proud to premiere a poignant examination of suicidal tendencies taken from it...
Read More