If you, the reader, can afford me the time, let me indulge you with a little trip down memory lane. It’s almost 11 years now since I first heard of Besnard Lakes, when a livejournal buddy on the internet (this is before having friends on the internet was socially acceptable) made me aware of their music.

I listened to their debut, Volume 1, and instantly fell for it. So much so that I even reviewed it and added it to my annual end-of-year list (R.I.P.) Besnard Lakes made it to #7 in my list, among acts like Interpol, Joanna Newsom, Arcade Fire and Walkmen, so you can tell how much they resonated with me. (Aside – notice Hot Chip at #1 with their debut, two years before ‘Over and Over’ broke through. The point being? I should be in A&R. My taste in music is clearly brilliant. And I am obviously a despicable human being.) 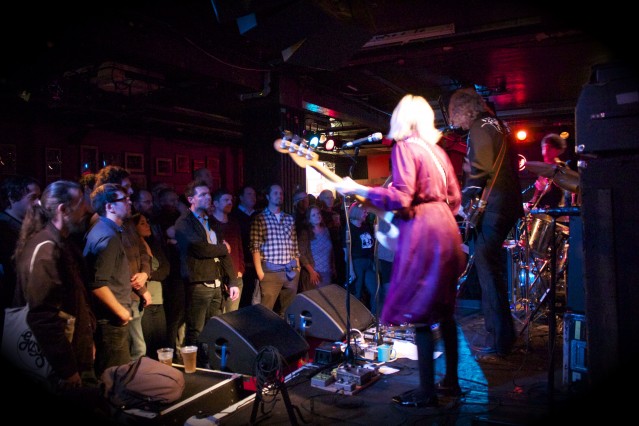 Besnard Lakes play the iconic 100 Club tonight, and it’s a mixed crowd; thankfully not the sausage-fest I’d envisaged. However, as they open with a raucous rendition of ‘Like the Ocean, Like the Innocent’, a sea of indie nerds start taking photos of co-founder Jace Lasek’s guitar pedals and range of guitars stacked front of stage, getting their sick perverted kicks in the process no doubt. I kid. (I’m not kidding). The song builds and builds before unleashing a flurry of pounding drums and distorted guitars. If the venue wasn’t situated in a basement underneath Oxford Street, you could almost imagine being on a runway prepping for take-off.

I’ve followed Besnard Lakes quite closely and been impressed with how they’ve evolved since their debut. Signed to Jagjaguwar, they’ve consistently released some remarkable records (Besnard Lakes are the Dark Horse and Roaring Night are especially excellent) but there’s a lingering feeling in the back of mind that they should be in same bracket as Canadian contemporaries like Arcade Fire or Broken Social Scene. For one reason or another, it hasn’t really come to fruition.

My theory? Guitar solos. They unashamedly love a good guitar solo. During ‘And You Lied to Me’, Lacek and guitarist Richard White lay down outrageously OTT solos which you can only stand back from and admire. It’s something which the people here love, but it’s not exactly radio-friendly I guess. 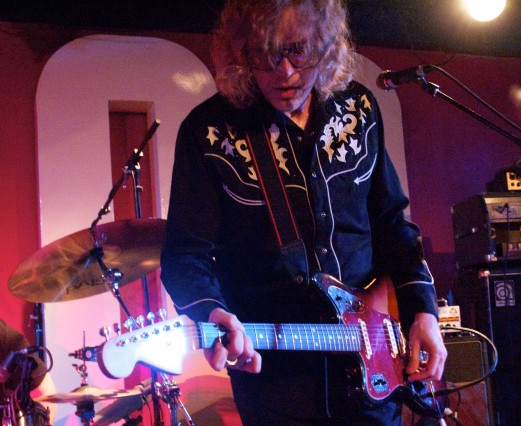 They perform like guitar heroes, Lacek wearing his finest black and red cowboy evening shirt, but I have to say there’s a strange sense of reality. I can’t quite put my finger on it until a heckler asks: “no smoke machine tonight?” Apparently it’s not permitted in the venue but it would have created a bit more mystique and atmosphere, and added to their other-worldliness.

“It’s probably a good thing as I can’t see through my glasses!” he replies before a kind member of the audience provides a special cloth/wipe for glasses. “Thank you, and round of applause to the lady over there. Wow, much better. I can see you now! Hi!”

The band pepper the set with a handful of new songs, and ‘Golden Lion’ sounds like positive progression (only without the prog), but the band are clearly humbled and taken aback by the crowd’s overjoyed response to the old material. The outstanding moment of the evening is the particularly long ovation after the wonderfully performed ‘The Albatross’. It blusters and swaggers proudly, boosted by besieged drums and layers upon layers of fuzz, with the lilting Beach Boys-esque Californian harmonies creating an emotional stratum through the song. Co-founder and vassist/vocalist Olga Goreas continually sings “you showed me so much,” sounding affirmative and heartbreaking at the same time. The applause is overwhelming. “You guys are awesome” says keyboardist Sheenah Ko, but the praise is well deserved. 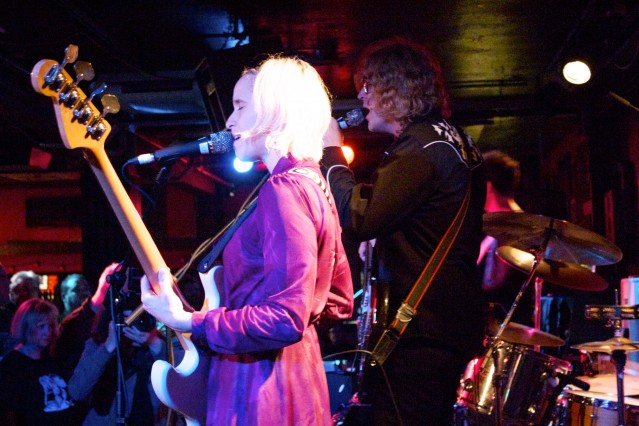 Thankfully, to the band’s credit, there’s enough variety in their set to stop it ever seeming like a ’70s prog-rock appreciation night. At times it touches on folksy, greatly harmonised Americana, and hazy, dreamy space-pop. ‘Devastation’ is a great example of this, as Goreas’ detached mid-range voice interplays nicely with her husband Lasek’s falsetto (pitch-perfect everytime I should add), before going into a stomping chorus. Finally there’s a well-earned encore of ‘And This Is What We Call Progress’, which is brutally relentless as Besnard Lakes bombard the crowd with what I can only describe as an aural assault to the ears.

In a good way. 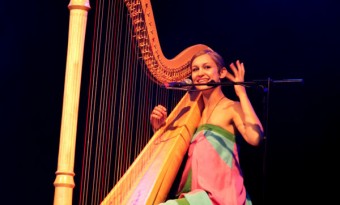 She may not be able to remember her lyrics (and her band distract as often as they enhance) but Joanna Newsom still earns a standing ovation at the Apollo...
Read More