Presenting the eleven best music videos to have hit our monitors over October, from an interfering Terry Richardson to an animated Radkey (and lots of vomit and dead bodies)…

A bloke from the housing association came round to repaint the bathroom ceiling this morning, which was a great relief as painting ceilings is a long, tedious job that inevitably ends with flecks of emulsion all over your head, clothes and possessions. Midlothian miscreants Black International have come up with a much quicker method in the video for ‘Animal Without Backbone’, which involves using singer Stewart Allan as some sort of human paint cannon. Probably not the most efficient technique, but I’ll be sure to mention it to the housing association for future reference.

Another nice ‘n’ noisy track, although this video has a little more narrative (and a lot less paint). ‘Junk DNA’ sees a conflicted soda brand executive testing an addictive but experimental additive on the Demob Happy dudes, and it seems to go down a treat…

Georgia Black – Will I Be Waiting

The creepy predilections of photographer Terry Richardson are well documented, although sadly the various petitions and blogs calling out the pervy bastard don’t seem to have affected him much. Georgia Black takes him to task in a more original way in ‘Will I Be Waiting’, which sees a Terry-a-like manipulating her in front of a static camera for a series of sexualised shots. The awkward atmosphere is heightened through the photographer’s lingering touches, which are genuinely uncomfortable to watch.

God Damn – Dead To Me

Lots of people dress up as the undead at Halloween, but God Damn guitarist/vocalist Thom Edward seems to have got the wrong idea: he’s just dead. Still, it doesn’t seem to bother drummer Ash Weaver, who looks past his chum’s living impairment and carries on as normal. To be fair, Edward still seems to make a pretty good goalkeeper…

We raved about Nicolas Jaar collaborator Nicolá Cruz in a recent EP Address column, and it turns out he looks as good as he sounds. Or at least his videos do. This one for ‘Calibria’ reflects the sultry tropicality of the track, with an added story about some sort of levitating chaos emeralds. Respect to the singer, who must have had to lie in the mud for hours during her takes.

It’s been a while since we’ve featured a King Deluxe offering on The Monitors, so it’s a pleasure to correct that with this Pixelord production. The track’s title, ‘Rescue Cyber Party’, pretty much describes the video too, wherein a hardy bunch of psychedelic characters (my favourite being the constantly vomiting robot) are sent on a quest to find their friends and, y’know, save the party. It’s a bit like a Kramer’s Ergot comic turned into a computer game. Which suits me.

Remember the days when MTV seemed like a genuine source of counter-culture, with inventive and gross animations being shoved in as idents every five minutes? Radkey probably don’t as they’re so flipping young, but whoever animated the brilliant video for ‘Glore’ does, and his claymation skills have reignited memories of a lost youth spent vegging in front of the box. Or rather an imagined youth, as I never actually had MTV. Still, if I had, I’d like to think it would’ve consisted of this video on a loop for eternity.

Róisín Murphy’s Hairless Toys is probably the most immaculately produced album on this year’s Mercury Prize list, and while ‘Unputdownable’ isn’t my favourite track from it (although it has a pretty enjoyable Fleetwood Mac vibe), the video is similarly slick. I have no idea what’s going on beyond some sort of drunken, dreamlike satire of European cinema, but as the lyrics imply, it has “a plot that’s so unpredictable, that I read on compulsively…”

One of our favourite saxophonists, Shabaka Hutchings seems to be everywhere at the moment. Records by two of his bands, Sons Of Kemet and The Comet Is Coming, are being released within six weeks of each other, and he also stars in this. ‘Play Mass’ sees him sprinting through city and countryside with his sax, while a bunch of weird golden lizard gods cavort about the place. If you haven’t seen last month’s Sons Of Kemet video for ‘In The Castle Of My Skin’, then you need to watch that too. Go on. Now.

Let’s finish with something fun. Music videos based around dancing are obviously ten-a-penny, but it helps when they have some (wait for it) ‘Dance Originality’. VO5’s retro disco number is brought to life by a couple of genuinely awesome dancers, against a backdrop that feels like it could’ve been lifted from a funky version of Street Fighter. Good harmless fun, and not a single vomiting scene or dead body in sight. Hang on, how did this get in?

LIVE STREAM: Match&Fuse Festival with Get The Blessing and more... 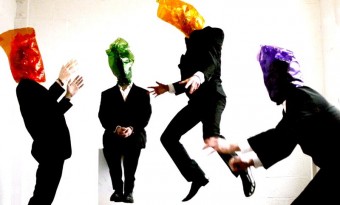 From 8pm till midnight we'll be broadcasting an incredible line-up of music live from Match&Fuse festival, including Get The Blessing, Alfie Ryner and Snack Family...
Read More