A lot of exaggerated mythologising has taken place since the punk explosion of 1976/77, to the extent that a thousand people claim to have attended the Sex Pistols’ Free Trade Hall gig in Manchester, despite them famously only playing to a crowd of about ten. Still, while most people’s enthusiasm for that era tends to wane after the seventeenth Punk Brittania revival, it’s still capable of producing tiny personal musical revolutions.

Or at least it did when I first discovered punk in my early teenage years, having up until then been largely raised on taped Top 40 countdowns and Shine compilations. Obviously it was nothing like being that age when it was actually kicking off, but suffice to say my tiny mind was still unceremoniously blown by The Clash, Slits, Buzzcocks et al. A heavily hot-rocked ‘God Save The Queen’ t-shirt is the only remnant of those days, but the effect it had on my musical education is indescribable.

Thankfully my love for punk didn’t spill over into any enthusiasm for the asinine ‘Nu-Skool Punk’ (or it’s irritatingly upbeat sibling, ska-punk) adored by the only other people at school aware that Chelsea was once a band as well as a football team. Instead, I moved on to post-punk, which took those pieces of my brain punk had shattered, put them into a snow-globe designed by Peter Saville, and shook them so vigorously my mouth started foaming.

However, while I was soon revelling in the sounds of Josef K, The Au Pairs, Essential Logic and Blue Orchids, the joy was tempered by a question that kept needling away at me – why weren’t bands making music like this any more? It’s a question that has found itself being asked to this day (the mid-noughties ‘punk-funk’ era being too arch and overproduced to count). For all the brilliant music around, where were the rough and ready DIY groups mixing the energy and spirit of punk into taut, edgy, scratchy, sexy songs? Why, still, had no one come along who was acerbically, poetically uncompromising enough to allow Mark E. Smith to hang up his boots-ahh?

Perhaps these bands were out there, but so deep underground that they were destined to go unheard until the 2030 equivalent of the brilliant Messthetics compilations started being compiled. Or perhaps, being someone who finds the current trend of releasing music on cassette too twee and pestiferous, I simply wasn’t cool enough to hear them. Or was too lazy to deserve them. Luckily, just as I was giving up hope, Shopping have answered my prayers.

An East London three-piece heavily associated with the vibrant sweatbox that is Power Lunches on Kingsland Road, they’re basically exactly what I’ve been looking for all this time. Channeling the snappy spirit of bands like Delta 5, Mo-Dettes and, appropriately, The Shop Assistants, their debut album Consumer Complaints sees them take the post-punk ball and gleefully punt it over the garden fence.

Said ball is then retrieved in order that vocalist/guitarist Rachel Aggs can get it rolling on opening track ‘Any Answers’. “Any answers?” she asks. “Gimme questions! And I’ll say yeah! Yeah! Yeah! Yeah!”. Which, fittingly, is what we end up exclaiming in the office throughout the album’s first play. And, indeed, on every subsequent play.

The single ‘In Other Words’ swiftly follows, and is still a winningly defining statement, with a riff as sharp and tasty as peanut brittle (disclaimer: I don’t actually know what peanut brittle is, but it sounds damn tasty). The last time we played it the dog upstairs, Prince, started to bark along, proving its charms are as irresistible to animals as to humans.

‘We Say You Pay’ doesn’t inspire the same canine singalong but is still superb, with Billy Easter’s slinky ESG bassline left bruised by Andrew Milk’s battered kit and some deliciously discordant guitars, rounded off with some snarky lyrics that go “blah blah blah blah blah…shut up!”.

‘Get Going’ does just that at the 3 minute mark, speeding into a cowbell-driven crescendo, while ‘Hard as Nails’ is awash with police sirens and double-time drums, and ‘Long Way Home’ spins around a brilliant bassline. There’s a nice strut to the more aggressive ‘Right Now’, while ‘For Your Money’ is much lovelier than the song’s message, reminiscent of a stripped down Electrelane.

I’ve no idea whether ‘Hanover Cure’ is about the German city of Hannover. It’d be good if it was. My only memory of the place is of the car I’d been travelling in being crushed there after breaking down on the autobahn, and getting a cab through a sordidly grim red light district on the way to the train station. This would’ve provided a welcome cure while riding the rails to Hamburg.

In fact the whole album is something of a rejuvenator. ‘Santa Monica Place’ is so bouncy it just about turns your ears to rubber, while ‘You Are A Sort (Don’t Call Me)’, possibly the best record about fending off unwanted attention since ‘Park It Up Your Arse’ by Thee Headcoatees, is every bit as full of withering attitude as its title.

The final track, ‘Theme’, does indeed make a pretty good theme for the band as a whole, full of bite and swagger. “Need something / Want something / Buy” go the lyrics, and as an incitement to consumerism you have to admit it’s pretty effective, even if the only thing it encourages you to buy is the album itself.

Which would be a bloody smart thing to do. While some might turn their noses up at Shopping for refusing to push their trolley any further than aisles ’78 to ’83, my counter-argument would be that those shelves haven’t been looted or plundered nearly enough. Which is more than you can say for the shelf marked ‘shopping-related puns’ so I’d better stop now, before I go and spoil it all by saying something stupid like, “no consumer complaints here”… 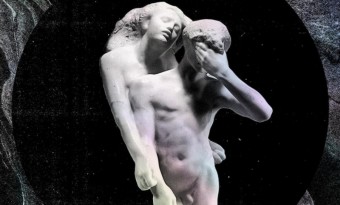 In a way Reflektor acts as a clarification... putting the history and discography of Arcade Fire in perspective.
Read More