There are two daunting, near-impossible tasks that loom into view following the death of a loved one. The first is to try and rationalise the event, to try and make sense of something that inevitably feels utterly senseless. Following (and frequently failing) that, there is the effort to try and kindle some tiny positive from it, to find some glimmer of light flickering in the devastating aftermath.

Sometimes that positive is simply the thought that someone who was suffering is now at peace, but in the case of the still much-missed superstar Amy Winehouse, the flickering light has grown into something that has spread beyond even the enduring power of her music.

Since being formed on what would’ve been the singer’s 28th birthday in 2011, the Amy Winehouse Foundation has not only helped fund charities like Centrepoint and Beat, but has also launched its own hugely successful projects such as the Resilience Programme, which sees trained and accredited volunteers drawing from their own experiences in order to educate students, parents and teachers around the country about substance misuse and recovery.

However, there’s another Amy Winehouse Foundation project that has not only brought invaluable assistance to many young musicians over the last couple of years, but can now benefit your ears too. Amy’s Yard is a 12-week course for disadvantaged young people that not only supports and develops their talent but also educates them about every facet of the music industry, helping them become self-sustaining artists.

This not only involves masterclasses given by industry experts such as Island Records president Darcus Beese (who says the Amy Winehouse Foundation is doing “a fantastic job in keeping Amy’s spirit alive by offering hope and opportunity to young people who are struggling in life”), but also sees participants given the opportunity to record in Amy Winehouse’s own studio, guided by producer Urban Monk, a man who’s previously worked with the likes of Giggs, Wiley and Lily Allen.

The participants are referred by organisations like The Roundhouse, Key Changes, New Horizon and Pilion Trust, who all work with vulnerable young people facing a variety of complex needs such as homelessness, mental health issues, substance misuse or unemployment. The humbling words of Jhordan Romaine, a 21-year-old graduate of the AQA accredited course, demonstrates just how much of an impact the Amy Winehouse Foundation is having on the lives of those it helps:

““I’ve always wanted to be a musician – a producer – and the inspiration Amy’s Yard gives me is just amazing. But going there is about much more than just making music.  My mum threw me out when I was 18. I’m 21 now. I was going through a really rough patch and smoking a lot of weed and drinking. I was registered with two psychiatrists when I was 17, my mum just couldn’t cope with it.   So I lived on the streets for about a month, until an organisation called New Horizons found me a place to stay. While I was staying there a mate told me about Amy’s Yard.

“  It’s a brilliant place. You get to see how the music industry actually works. You get to see what a professional studio looks like and hear just how amazing a human voice can sound! You meet with lawyers and record company executives and real professionals. They’re role models.

“I would say 50 per cent of what we do at Amy’s Yard is about the music, and 50 per cent is about showing respect, giving reassurance and about the skills you need to just be a good person.

“  And things are improving at home. It will take some time but my mum and me are rebuilding our relationship. That’s a really good thing.”

Romaine’s uplifting ‘Early Bird’ is the opening track on a new album released to celebrate four years of the Amy Winehouse Foundation, which features an impressive selection of Amy’s Yard artists. From Romaine’s winningly lackadaisical drawl (complemented by Posy Sterling’s catchy vocal hook) to the incredible melodies and stirring synths of Irini Mando’s ‘Hang’, the ten tracks on Amy’s Yard – The Sessions: Volume 1 provide a worthy tribute to the life that made the project possible.

Having been lucky enough to witness some of these artists performing in the past, it’s amazing to hear how that raw talent has been fleshed out in the studio. La Braya’s ‘Spotlight’ sounds particularly formidable in its studio form, while the grimy ‘Turn It Up’ by Mainee Montana Ft. Porsha Channelle is also being released as a double A-side alongside the silky ‘Tick Tock’ by the supremely talented Zodiac. Perhaps the best testament to the success of Amy’s Yard, however, is the fact we’ve seen Facebook acquaintances sharing tracks by the likes of Benofficial without any knowledge of the program that’s helped make them possible.

Amy’s Yard – The Sessions: Volume 1 is available now on iTunes. Check out the tracklisting below, and learn more about the Amy Winehouse Foundation here. 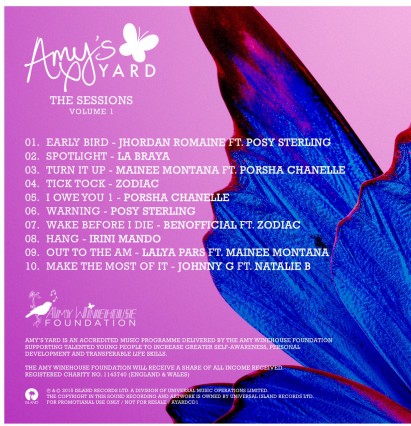 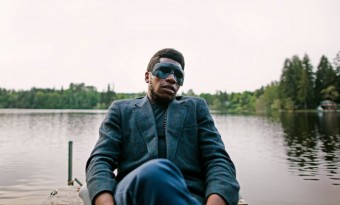 A musical sea-change is forecast when Mutations hits the south coast this winter, with the likes of Ought, Om, Chelsea Wolfe, John Talabot and Willis Earl Beal set to tear the city a new one...
Read More