As far as I can remember, supply teachers were always pretty easy targets. They’d come in, take the register, then cower in the corner before the paint (art), sulphuric acid (chemistry) or hacksaws (D&T) started flying. I remember one guy placated the class by letting us watch a video rather than follow the lesson plan. The fact the video in question was a pirate copy of ‘A Clockwork Orange’, still banned at that point, didn’t seem to bother him. Shortly after the (first) rape scene, someone turned to him and asked: “What do you think, Sir?”

“Well, it’s not quite Jean-Claude Van Damme, is it,” was his response.

Laura Mvula used to be a supply teacher, but while some of her colleagues may have been busy showing ultra-violent films to classroom’s full of fifteen-year-olds, she used any spare time she had to work on songs on her laptop. However, while she’d previously been trained to compose for an orchestra, the sonic limitations of Garageband meant she tended to restrict herself to celeste, harp and timpani, as those were the least synthetic-sounding instruments in the sound bank.

That’s why those same instruments frequently dominate her début album, “Sing to the Moon”, which also allowed her access to a full orchestra and the talents of Rumer producer Steve Brown (who you may also remember as Alan Partridge’s bandleader/nemesis Glenn Ponder from ‘Knowing Me Knowing You’). Yet despite the new found sonic freedom, she uses the tools at her disposable sparingly. Opening track ‘Like the Morning Dew’, for instance, sees her voice given a huge amount of space which she uses to harmonise with herself, while ‘She’ goes for a good two minutes before the beat kicks in. When it finally does, it instigates some simple but effective polyrythms that give the track a necessarily propulsive kick.

The highlight, however, is undoubtedly ‘Green Garden’. Kicking off with singing, handclaps and a joyously catchy celeste ostinato, it blooms into an Amy Winehouse-style soul stormer. “To me,” she insists, “this is still a bit of a bedroom track”. Well, she must have one hell of a bedroom. It’s an unbelievably good single, although it’s a shame that it turns out to be something of an anomaly, ”Sing to the Moon” being largely dominated by slow, measured, cautiously exploratory songs of varying quality.

‘Make Me Lovely’ is one of the better ones. Having been schooled in the challenging arena of modern classical music, Mvula has spoken about the guilt of wanting to compose songs using conventional harmony, feeling “incongruous, as though I shouldn’t be in a context where there was an orchestra”. Happily, here she marries her predisposition towards prettier music with techniques way beyond the capability or ambition of your typical pop songwriter. The rhythm follows the unregimented syntax of her vocals, not dissimilar to Van Dyke Parks’ arrangements for Joanna Newsom on “Ys”, while odd little touches of discord stop the fuller-sounding choruses from getting schmaltzy. At times it almost feels like Scott Walker after being put through one of those ‘so-and-so transposed into a major key’ Youtube videos.

However, while other songs like ‘Can’t Live With the World’ threaten to justify the likening of Mvula to a softer, sweeter (albeit more insipid) Nina Simone, others just descend into mush. The lyrics of ‘Father, Father’ – “Father, please don’t let me go” – sound like they should provide a real emotional punch but, unless I’m dead inside (a very real possibility to be fair), just sounds lifeless. Ultimately you worry it’ll end up being mewled by some berk on X-Factor before long.

Similarly, the lashings of harp on ‘I Don’t Know What the Weather Will Be’ end up making it sound like the Disney themes Mvula adored as a child, perhaps trying to erase the memory of the first time she heard her own voice singing ‘A Whole New World’ from ‘Aladdin’ (“it was so bad. I cried so much”). Elsewhere, closing track ‘Diamonds’ provides a truly mawkish finish and should have been replaced with the far superior ‘Jump Right In’, a bonus track on the ‘deluxe’ edition which makes restrained use of muted horns, lightly dashed cymbals, brushed snares, delicate strings and a beautiful, dreamlike chorus.

Still, there are enough moments in between, such as the triumphant, 7/4 intro to ‘Flying Without You’, which almost sounds like a brass-led snatch of Philip Glass or Moondog, to keep your ears engaged. It cements the image of Laura Mvula as a composer of smart, symphonic pop that’s a lot more interesting than it first appears. Yeah, some of it’s boring, but even the boring bits are a billion times better than Emeli bollocking Sandé. And for that we should be grateful. 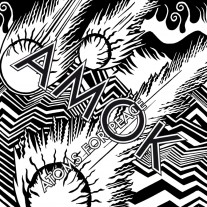 There's been a certain amount of confusion surrounding Thom Yorke's Atoms For Peace project. Is it a supergroup? A solo album with some mates helping out? An update to "The Eraser"? An attempt to erase "The Eraser"? And what the hell's Flea doing there anyway? Does any of this matter? No. What we have here is an album created by the band Yorke put together to tour his debut solo album: Joey Waronker on drums, Mauro Refosco on percussion, Godrich on guitar, keyboards, vocals, and percussion, and Flea, of course, on bass. The exact mechanics of the compositional process is difficult to decipher precisely, apart from the fact that many of the tracks had their genesis in group jams, but let's face it: most people are going to see it as a Thom Yorke album/Radiohead off-shoot, despite the fact that many of the rhythms and synth parts sound very similar to those on Godrich and Waronker's project with FEMME's Laura Bettinson, Ultraísta. Opening track 'Before Your Very Eyes' does little to dispel those comparisons, although its skittering, almost funky (!) rhythms also suggest an offcut from "The King of Limbs"; which in this reviewer's opinion is praise so faint it'd require a team of skilled archeologists to excavate the last remaining traces of positivity. Lead single 'Default' evoked a similar feeling upon first listen, but has since proved to be even more of a grower than Nick Cave's morning mast. As the icy verse shifts into the warm synth waves of the chorus, it all just clicks. Thom, meanwhile, sounds like he's fallen to temptation: "The will is strong / But the flesh is weak / Guess that's it / I've made my bed / I'm lying in it". Although he claims it's "eating me up" at the song's close, he sounds a little pleased with himself. Naughty bugger. There's a hint of 'Myxomatosis' (the song, not the debilitating rabbit disease) to 'Ingenue', which bounces a squodgy bassline off rhythms that seem to drip from the ceiling, and more distintive beats are evident on 'Dropped', where Waronker's writing credit probably explains the unusual six-beat time signature - although it's the way the song moves from staccato pulses to a driving legato bassline that makes you really swoon. However, when it moves back into the verse the momentum is sadly lost. Apparently Flea taught Thom to surf while recording this album (a somewhat hilarious image) but while 'Dropped' comes in waves, they're never quite as big as you'd like them to be. It's left to 'Unless' to provide a real high. A restless track that constantly feels like it's about to open up a vortex, it feels loose and free where other parts of the album are over-cooked. "I am weightless / I am rust / I couldn't care less," admits Thom. Whatever they gave him before recording this they ought to give him more frequently, as the whole thing has that oxymoronic exploratory restraint that marks all his best work. Sadly, the rest of the album fails to maintain that standard. While the acoustic elements of 'Judge, Jury and Executioner' and the bass rips and off-kilter guitar lines on 'Stuck Together Pieces' add decent contrast to the record's dominant electronic elements, the tracks themselves are nothing to write home about. While things do get more interesting on the Burial-aping title track that closes the album - an enjoyably haunting way to finish proceedings - the rhythmic click is way too loud in the mix and distracts from the skeleton of a beautiful song. It does, however, feature the most intriguing lyrics on offer: "A penny for your thoughts / They're spaghetti / They possess me / I'm trying to be a thought killer / They come back to bite me". Yet these only highlight the fairly unadventurous wordplay elsewhere. There is nothing here that lyrically matches (nor musically, in all honesty) the violent desperation of tracks like 'Black Swan', 'Skip Divided' or 'Harrowdown Hill' from "The Eraser". Perhaps too many cooks ran amok while concocting this particular broth. Or perhaps, as Thom ruminates on 'Before Your Very Eyes', "Time's fickle card game" is catching up with him. '"Amok" is a decent hand, but one that folds on the river. We can only hope he goes all-in next time round.
Read More